Orbán Sees Nothing Wrong With His Private Plane Trips 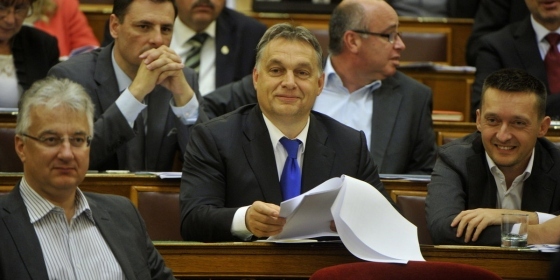 György Szilágyi thinks it is more than suspicious that the Hungarian PM receives such costly trips from a man who continuously wins state tenders.

“Orbán cannot defend himself by saying he received the gift as a private citizen. A Prime Minister can’t ever be seen as a private person, because they decide the winners of the tender as an office holder,” Szilágyi said.

In his answer, Viktor Orbán congratulated the fellow MP for “reinventing the wheel,” and made it clear that as he’s been traveling like this for thirty years and is going to continue to do so in the future, he sees nothing wrong with his trips.

The PM also said, “despite the opposition attacks, I will [continue to] travel to Hungarian-related occasions, whether they be sport or cultural events. Regarding the critics, I became obligated to the businessmen following the gifts,” he said, “I would see the person who can put me under obligation.”

In a press conference after the plenary session, Jobbik’s spokesperson, Péter Jakab, asserted that “In a developed state governed by the rule of law, the Prime Minister would immediately resign.” Referring to a recent amendment of the law on public assembly, Jakab suggested that “Orbán does not want to ban corruption but rather prohibit the people.”