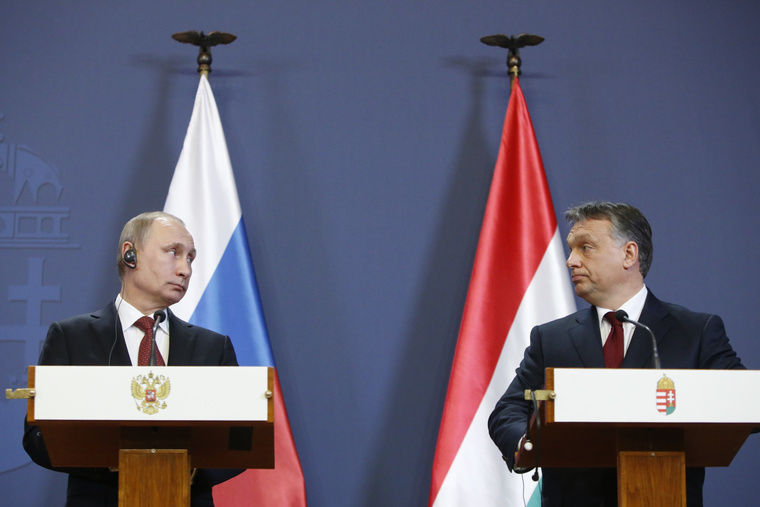 Five agreements were approved by representatives of Hungary and Russia on Tuesday evening in Budapest, following discussions between Hungarian Prime Minister Viktor Orbán and Russian President Vladimir Putin. Treaties were signed in the presence of the two leaders at a ceremony in Parliament on training in the field of the nuclear energy industry, establishing a Hungarian high consulate in Kazan, capital of the Tatarstan autonomous republic of the Russian Federation, and Russian-Hungarian cooperation between regions and in the areas of health care and higher education.
At the press conference following the signature ceremony, Mr. Orbán announced that an agreement has been reached on the Russian-Hungarian long-term gas supply contract, which expires this year. The Prime Minister explained that although technical issues still need to be discussed, the contract enables the future usage of natural gas so far not used by Hungary and settle financial obligations when the gas is required. “This is a great relief for us”, he said.
The Prime Minister pointed out that Hungarian families’ energy supply has been secured and the operation of Hungarian industry has also received a guarantee. In response to a question, Mr. Orbán said that in the absence of this agreement and a secure and calculable gas supply from Russia, the cabinet’s policy of decreasing public utility costs could not be continued.
The Hungarian head of government also said that the relationship between the European Union and Russia has to be settled sensibly and as soon as possible. In his opinion, it would be unsensible to exclude Russia from Europe; the region’s security cannot be established against Russia, he stressed, adding that the Minsk ceasefire agreement is a good basis for the settlement, which could possibly be founded upon peace and Eurasian economic cooperation.
Russian President Vladimir Putin said at the press conference that his country is a reliable partner of both Europe and Hungary in supplying natural gas and oil, highlighting that all issues raised by the Hungarian party were settled. Gazprom is ready to rephase the unused quantity of gas for the next period and Hungary will not have to pay for unused gas, he stated, adding that Gazprom is not against increasing storage capacities.
The Russian President also spoke of the promising opportunities in broadening economic cooperation between Hungary and Russia. Moscow has been among Hungary’s most important trade partners in the previous years and efforts must be made to further stimulate trade activity, he stressed, explaining that the agreement concluded last year on the enlargement of the Paks Nuclear Power Plant and the preferential loan provided for its implementation are very favourable deals for Hungary.
Both leaders agreed that whatever will be built instead the South Stream gas pipeline, the two countries will seek cooperation in its construction and maintenance. “It remains in our interest to receive energy, gas from the South”, Mr. Orbán explained, adding that Hungary would be most content with a pipeline bringing gas from Turkey through Greece, Macedonia and Serbia and further on to Western Europe from Hungary. He said that the implementation of the concept was encouraged by Mr. Putin at their meeting.
via mandiner.hu
photo: index.hu/Zoltán Tuba