Commenting on the United Kingdom’s exit from the EU on Friday, PM Orbán said after a meeting of the “Friends of Cohesion” group that “Britain’s exit and the fact that everyone is still alive in the country shows that there is life outside of the EU.”

Orbán criticized the EU’s economic policy, saying that, unlike Hungary, most member states didn’t cut taxes and didn’t support competition, but introduced protectionist measures that did economic damage. Europe’s competitiveness has “declined on a global scale, and that comes with a price,” he added.

In 2016, prior to the “Brexit” referendum, the Hungarian government published a page-long advertisement in conservative Daily Mail in an attempt to convince the British electorate to vote for the United Kingdom to remain in the European Union.

The ad featured the Hungarian flag and coat of arms and the signature of Prime Minister Viktor Orbán with the message:

The decision is yours, but I would like you to know that Hungary is proud to stand with you as a member of the European Union” 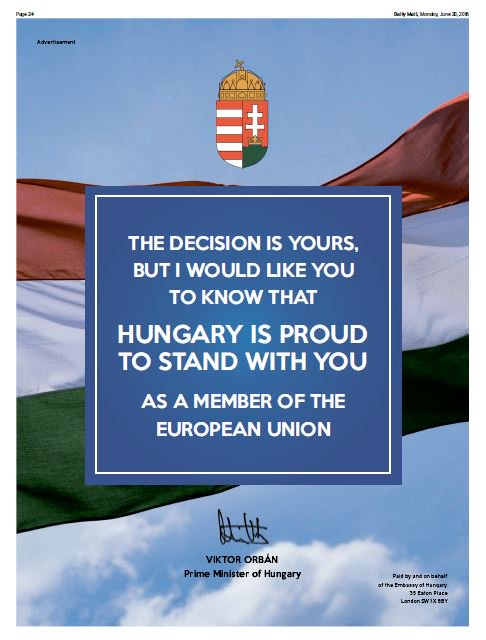 Lately, the Hungarian government repeatedly showed support for Boris Johnson for “being able to succeed in enforcing the will of his people, who want to secure their sovereignty outside the European Union.”