Prime Minister Viktor Orbán said on Monday that “Hungary’s government and its head” cannot be in the position to support a European Commission presidential candidate (Manfred Weber) who has announced that he does not want the vote of Hungarians.

At a joint press conference held with Vice-Chancellor of Austria Heinz-Christian Strache, Orbán was asked to comment on ruling Fidesz’s decision to withdraw support for Manfred Weber’s candidacy.

Weber has said he does not want to become commission president with the help of votes from Hungary, Orbán added.

This is a serious position and a violation of the principle to always respect voters,”

The government does not consider any of the candidates in the EC presidential campaign to be suitable and “we are looking for a suitable candidate”, he said, adding that a complicated series of talks could be expected ahead of the president’s election.

Orbán said that though the “pro-migration forces” — which he said included the left and the majority of the EPP — were in a strong position, the rise of the “anti-migration” forces — the right wing of the EPP and parties to its right — would create “a more balanced situation”.

The prime minister expressed hope that the European Council would eventually have more members who belong to the right wing of the EPP or the parties to its right.

As regards Fidesz’s EPP membership, he said the party did not see a place for itself in an EPP whose majority comprised “pro-migration forces”.

“This was why we had to suspend our membership rights, to wait and see in which direction the party turns after the election,” Orbán said. He added, however, that the view that the EPP should open to the right, backed by Fidesz, was a minority one within the grouping.

Orbán said that if Fidesz had a right to hold the minority view within the EPP regarding strategic matters, it would stay in the grouping. But, he said, if the EPP “becomes intolerant, then we will of course have to find our place elsewhere“. 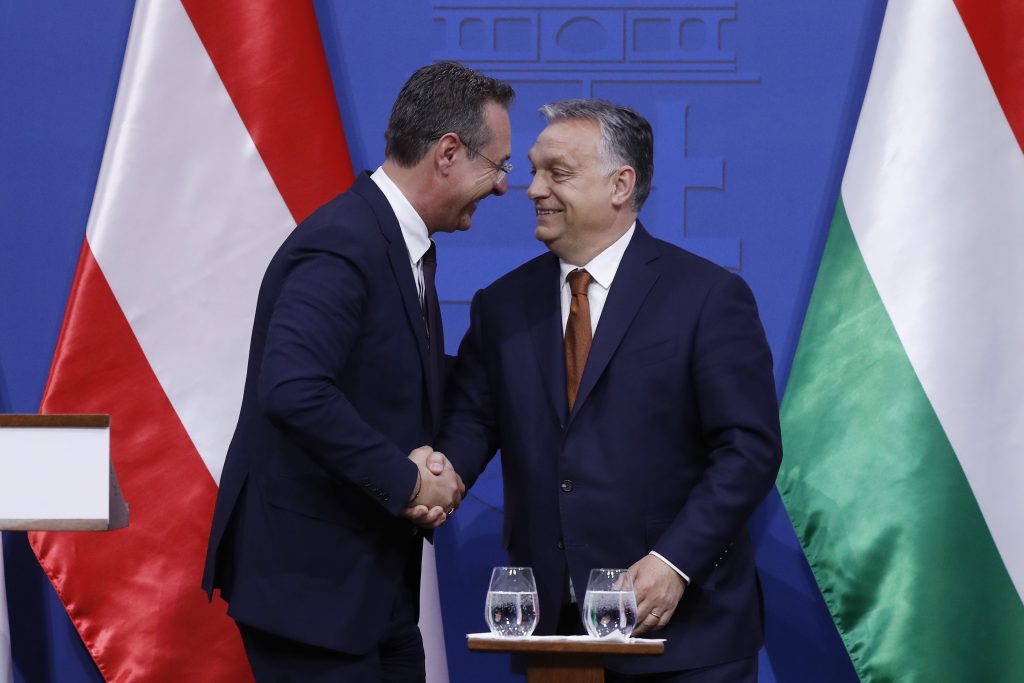 The prime minister stressed, however, that Fidesz would hold off on making a decision about its EPP membership until after the EP election. This was why, he said, the party had not attended a political meeting recently convened by Italian deputy PM Matteo Salvini, insisting that Fidesz did not want to quit the EPP without knowing the outcome of the elections.

It took Strache and his Freedom Party for Austria to adopt an anti-migration stance and demonstrate sympathy for Hungary’s border protection efforts, Orbán told a joint press conference after the meeting. The previous, left-wing government in Austria did everything in its power to prevent Hungary from building its border fence but everything changed with the right-wing government, he said.

Changes are needed in Europe similar to those in Austria,

Orbán added. If Austria’s centre-right ruling party can work together with a patriotic rightist party then this should be possible elsewhere in Europe, he said, adding that what works in Vienna could also work in Brussels.

Orbán described the European left-wing as “hopelessly pro-migration” and said if the centre-right parties were to work together with the left wing then sooner or later they would be forced to make a compromise. He said that

There was general agreement at the meeting that Christian culture must be given priority, because respect for women, the freedom of speech and religion, and the equality of voting rights can only be maintained in a Christian cultural environment, Orbán said. 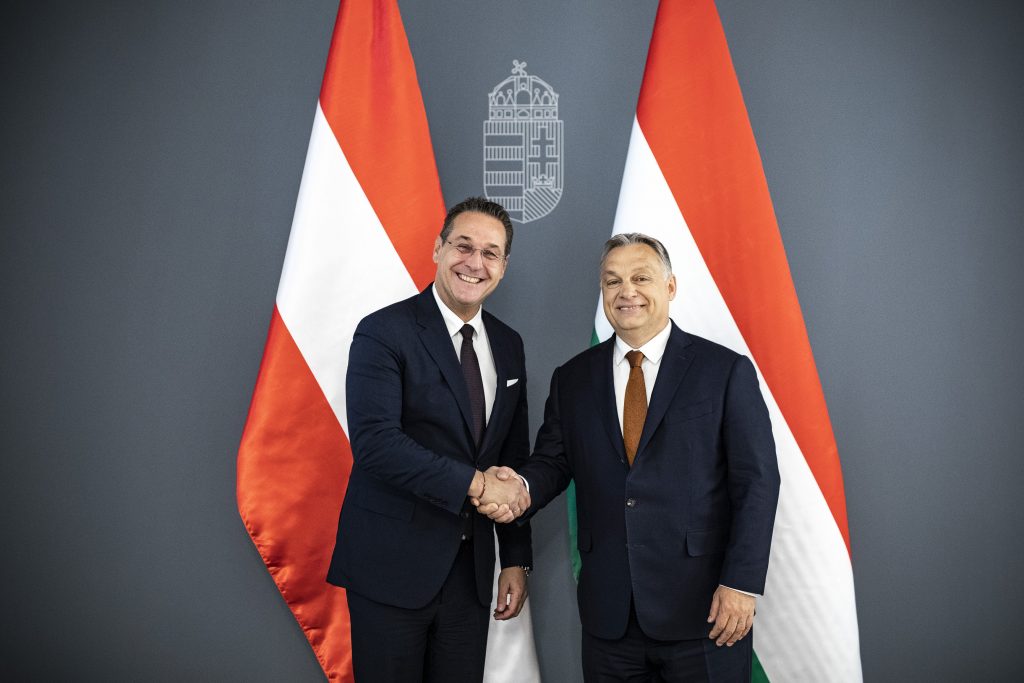 He also said they were in agreement that Hungarian-Austrian bilateral relations were orderly and successful. He added that he expected further cooperation between Hungary and Austria, describing them as two countries with successful economies.

The European left has an economic programme involving tax increases, bureaucracy and growing debt, which is essentially “a socialist system” that Hungary has already experienced and “would not like to see Brussels experiment with”, Orbán said.

On the subject of the renegotiation of the EU’s Lisbon Treaty, Orbán said he would welcome “opening up the question of the treaty if we were able”, adding that “we’re forced into the treaty currently in effect”.

Asked about Hungarian-Austrian cooperation, he said that although the two countries had some opposing interests, they could be managed “with good will and strength of spirit”.

Orbán said he was certain that Hungary and Austria could find solutions to all their disagreements. 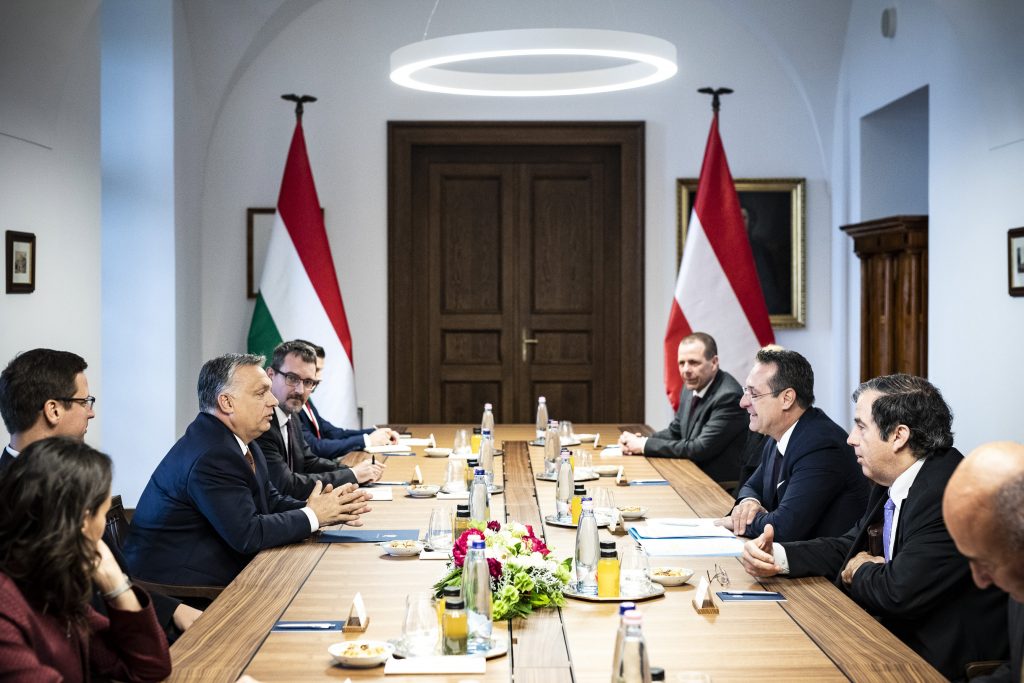 He said that on the issue of Austria’s decision to cut family benefits for foreigners working in the country, they had decided not to address the matter until the European Court of Justice has reached its verdict.

Orbán also said Fidesz was keeping track of which parties and politicians stood up for Hungary “whenever the European left launches an attack against Hungary”. The prime minister said the FPO had clearly stood up for his country, adding that “we won’t forget this.”