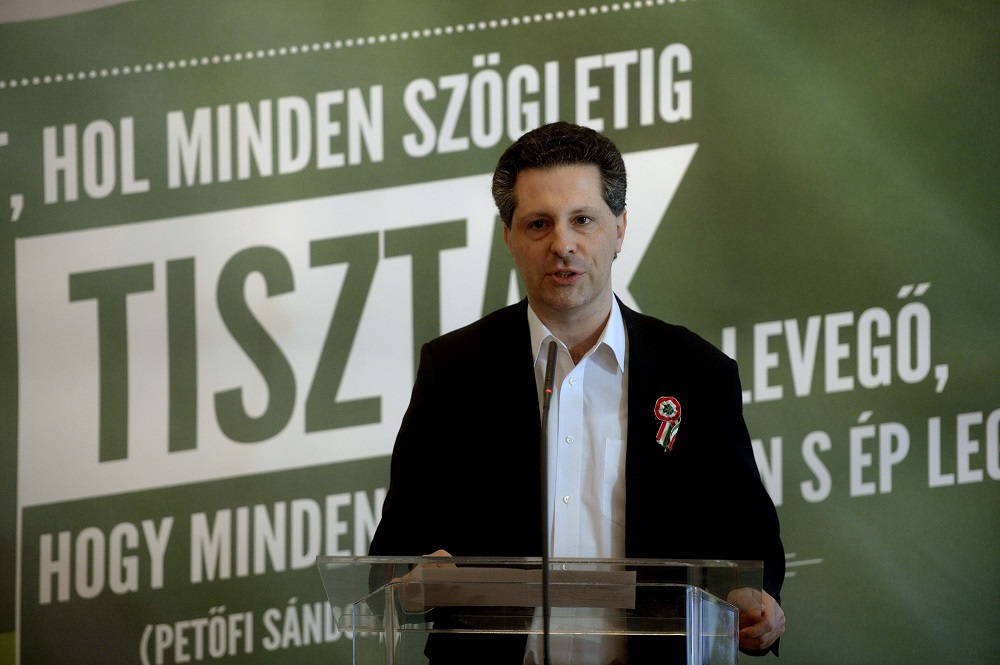 Marking the national holiday, Hungarian opposition parties have continued to criticize the government harshly over its controversial domestic and foreign policies. András Schiffer, co-leader of the green LMP party, warned that “a new dependence will not eliminate another, but will steer the country into a fatally vulnerable situation”, referring to the contract on a Paks nuclear upgrade Hungary had signed with Russia. Schiffer said that “a nation whose leaders negotiate deals in other countries at the expense of their own citizens cannot protect their country’s independence.” He said some politicians attempt to contrast freedom with national sovereignty whereas “the two are not in conflict with each other”. Centuries of experience has shown that internal and external dependence go hand in hand, he said, adding that there is no democracy where “the country’s energy supply is consigned (to a foreign power)” based on a pact classified for thirty years.

József Tóbiás, head of the opposition Socialist Party (MSZP), challenged PM Viktor Orbán to a public debate on democracy on Sunday. Addressing a celebration of the national holiday, he said that directions for the country must be discussed with voters. At the proposed debate “local voters should ask their questions and the two of us would answer”, and residents could judge the answers for themselves, Tóbiás said. Tóbiás insisted that a small elite “put millions into poverty, and restricted the freedom of the media” because “Orbán’s rule is selfish and feudal”. It is a “new feudalism” which “paralyses the country and destroys Hungary’s families”. The politicians of ruling Fidesz “throw taxpayers’ money to the wind, look east and negotiate with dictators, and make the country serve the propaganda of those dictators”. Many people are just losing their savings in the “banking scandal of the century associated with Fidesz” while the country’s leaders, instead of a responsible National Bank, support an “irresponsible central bank governor”, Tóbiás said.

Ferenc Gyurcsány, former Socialist PM and leader of the left-wing opposition Democratic Coalition (DK), said in 2015 Hungary was unable to celebrate press freedom, rather it was marking the “oppression of the press”. Speaking at his party’s commemoration of the 1848 revolution, Gyurcsány said, referring to the new programme structure of the public television launched on Sunday, that a new public television or “party television with lies” has been launched today. The problem is not that this is funded from taxpayers’ money and contradicts “all decent human norms”, but that it will obviously become a channel of lies and inhumanity, “in the service of a self-serving power degrading the nation,” he said. Gyurcsány asked the crowd to continue the struggle against the “present regime” and to take possession of the country because “one ten-millionth of Hungary belongs to you.”

The opposition Együtt (Together) party wants an end to the current “regime of national cooperation” and urges parliament to dismantle it completely, party leader Viktor Szigetvári said. Marking the March 15 national holiday in Debrecen, eastern Hungary, he said that “it is impossible to declare a peaceful and forgiving transition from the regime of national cooperation to something else”. Addressing a gathering in Pécs, south Hungary, Együtt deputy leader Péter Juhász said that opponents of the government need to initiate grassroots movements and refuse to accept that those in power are impossible to overcome.

The radical nationalist Jobbik party called for “a free, independent and respected Hungary” to be created, at March 15 celebrations. Deputy leader István Szávay criticised the politics of the past 25 years and said this was not what youth in 1848 were fighting for. He said the transition of 1989/1990 falsely portrayed as a democratic transition had derailed and the country is still unable to cope with its “red (communist) past”.