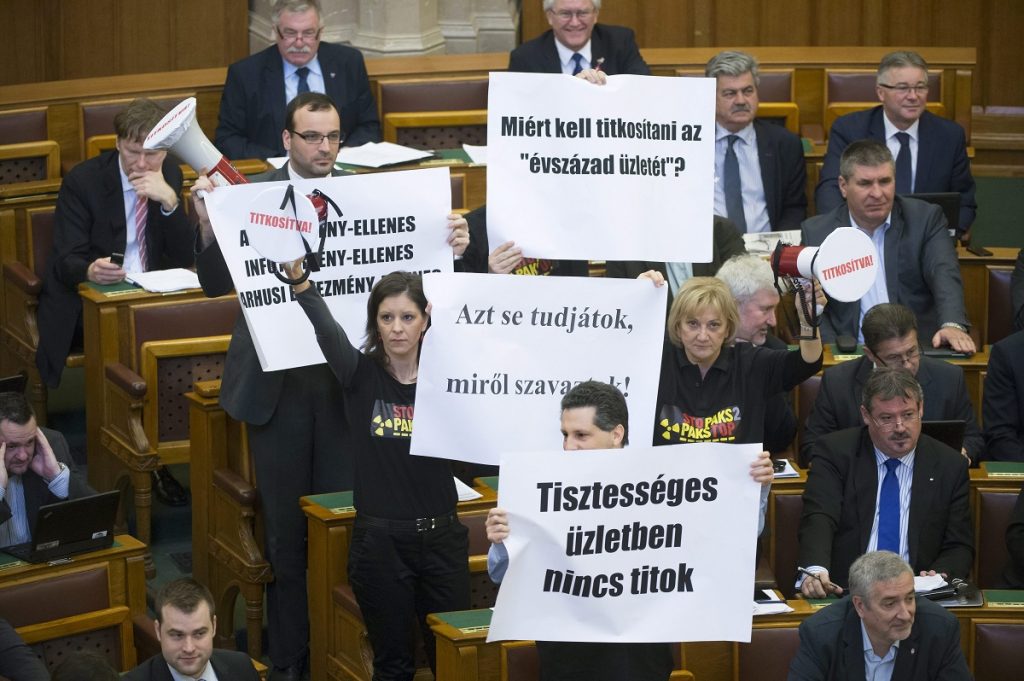 Hungarian lawmakers have voted to classify some data in contracts on the upgrade of the Paks nuclear power plant for 30 years. Deputies voted with 130 in favour and 62 against the motion to double the period during which the data is classified. Hungary has accepted a 10 billion euro loan from Russia for expanding its sole nuclear power plant that is being undertaken by Rosatom. The loan is expected to cover 80% of the costs of the construction of two new reactor blocks.

The classification harshly criticised by the opposition affects business and technical data in contracts signed between selected Russian and Hungarian organisations and subcontractors, the implementation agreements, and data that formed the basis of decisions during the preparation of the agreement. The ruling Fidesz party said the Paks expansion would serve energy security and enable a further drop in electricity prices and the project would also enhance Hungary’s competitiveness. Increased protection of certain information related to the project serves all Hungarians’ interests and is in line with the law on freedom of information, Fidesz insisted.

The left-wing opposition Democratic Coalition (DK) said the next government would have to lift the classification of data concerning the Paks nuclear plant. It is unclear whether the 30 years applies from the completion of the project or on the date when the contract is fulfilled, so in practice it could mean “sixty to a hundred years” from now, deputy leader László Varju said. The Russian loan to be taken out for the Paks expansion project puts Hungary at serious risk, he said.

The opposition Együtt (Together) party said classification was against the constitution. Zsuzsanna Szelényi noted that Együtt had asked President János Áder withhold his signature from the law and request a preliminary review from the top court. She argued that Hungarians have the right to know how their money is spent. Legislation already ensures that the most sensitive details for security policy are kept hidden. The law on classification poses a “huge corruption risk” and experts estimate that such a project would enable up to 500 billion forints to be stolen, she added.

The PM party said the government “wants to make a gigantic heist legal and delay the possibility of getting caught” by Tuesday’s vote. Co-chair Tímea Szabó said that Prime Minister Viktor Orbán and the Fidesz group “will not avoid going to prison.” She added that the classification is unconstitutional and it contravenes the law on access to information on environmental issues and the Aarhus convention on public consultation.

The green opposition LMP said it would turn to the president, the Constitutional Court and the ombudsman to complain against the vote on classification. Co-chair Bernadett Szél said the majority of lawmakers who approved the law would not be active in 30 years when the secrecy is lifted. Government claims that secrecy in such cases is a European standard is untrue, she said, citing French, Finnish and British examples showing that data is publicly available in such basic matters. If everything is classified, it will be impossible to prevent corruption, she said.