“On Tuesdays, the whole XX. century comes alive at the tables”: Interview with Ildikó Nagy, Director of the Hungarian House of New York 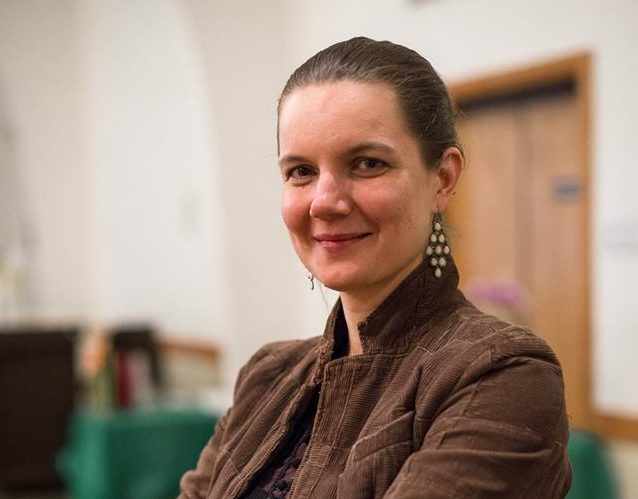 Operating within the framework of the Széchenyi István Society, the Hungarian Scouts Association in Exteris and the American Hungarian Library and Historical Society, the Hungarian House of New York opened its doors in 1966 to Hungarians who were looking for a little bit of Hungary in New York. From the very beginning, thanks to the work of hundreds of generous supporters and volunteers, thousands of visitors were able to learn about Hungarian culture in the House.

During the Third Hungarian Heritage Festival earlier this month, Hungary Today had the opportunity to sit down for an interview with Ildikó Nagy, director of the House. For four and a half years, she has been responsible for the numerous special events and programs organized for the Hungarian community. She spoke in detail about the operation of the organization and the beauties and struggles that come with keeping the Hungarian House and the Hungarian community alive in a city she calls a ‘parking lot’.

Tell me a little bit about the Hungarian House and the community.

The Hungarian diaspora is not homogeneous; every community is special in its own way. The fate of Hungarians is a bit different in every community. There are several Hungarian houses in America, and the Hungarian immigration wave can be observed in the compositions of the towns. What it was like in that period and how the communities were formed is still visible today. When the Hungarian House of New York opened in 1966, Hungarians paid a membership fee to cover the expenses of the house and to be able to visit the programs. Back then, it was a ‘home, away from home’ for Hungarians. Since then, the community has changed a lot. Today, with modern technology, anyone can call their relatives. Therefore, they do not necessarily seek out the Hungarian House, but instead, expect services from us. It’s understandable, though. In the 50s, people could reach a much higher standard of living a lot faster. Now the US middle class suffers from a job shortage while cheap labor flows in from the third world and lowers salaries. I think this country no longer can offer much more for European immigrants than Europe.

Have you traveled to other cities to see how other Hungarian houses work?

Although they look close on a map, for example Washington and Boston are four to five hours away. Someone who is committed to a community and takes responsibility for its programs usually does not have the time to travel such distances. Unfortunately, we are not traveling diplomats but community leaders. As the head of the House, I even have my minutes organized; I have to be at every event, and sometimes all the time in the world is not enough to deal with the problems of my own community. Sometimes I deal with house-related tasks at dawn or at night. I often ask my friends to assist me at events as volunteers. However, the annually organized Diaspora Council in Budapest is a great platform for meeting with other community leaders. Aside from sharing knowledge of Hungarian communities in the diaspora and the government’s diaspora policies, it is also wonderful for exchanging stories. 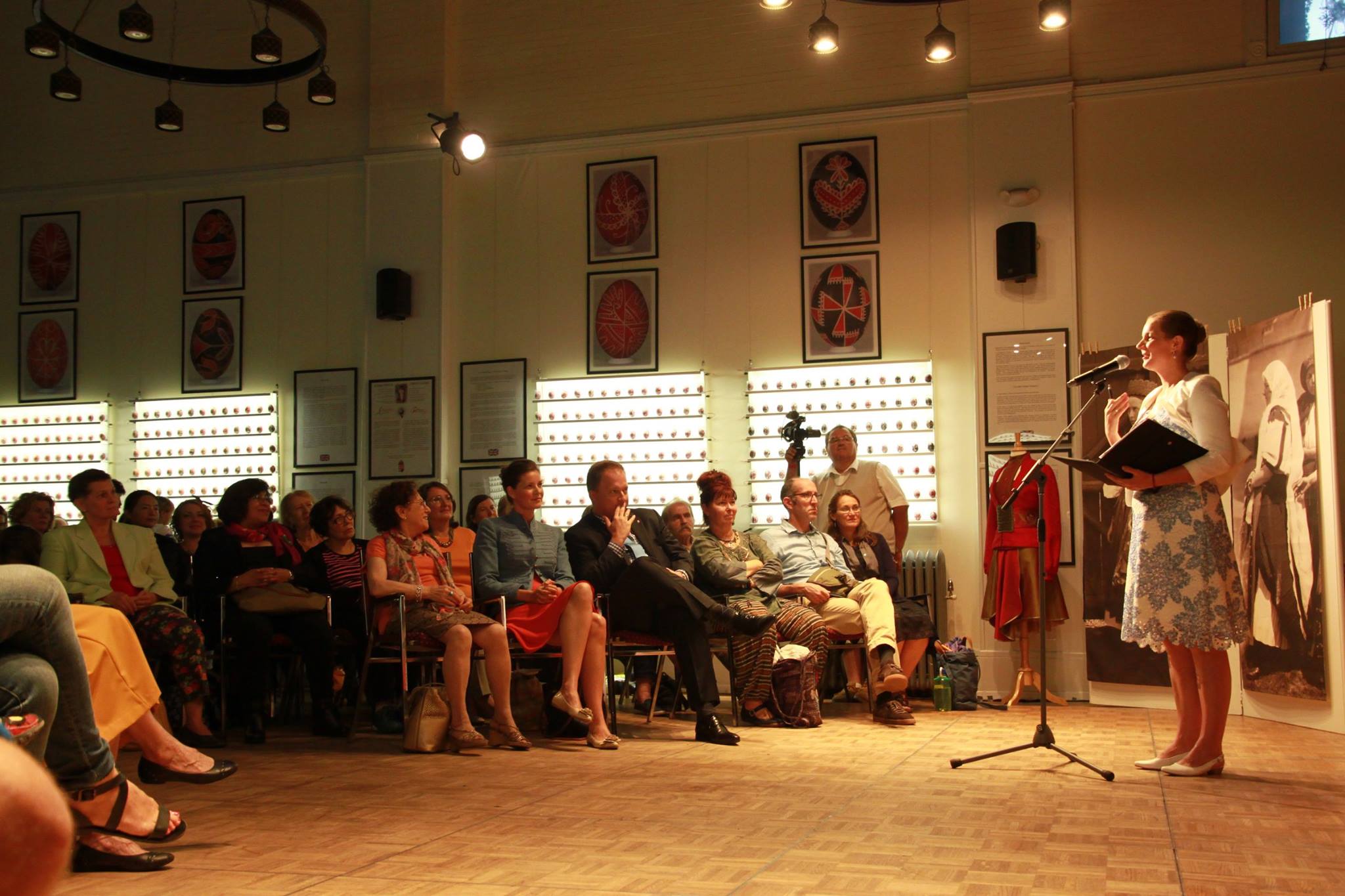 How do other Hungarian communities differ from the one in New York? For example, those in Boston or New Jersey?

Boston is a really young community; it has been very inspirational to watch. Over the last twenty years, many young intellectuals have arrived in Boston, often with their families. This is why a very young, strong and determined community has emerged there. A strong bond with Hungary, its culture and political life is visible within the community. They are familiar with contemporary poets, musicians and plays, so they visit many programs. New Brunswick, a hundred-year-old community that was an important destination for Hungarians emigrating after the turn of the century, is the exact opposite. After ‘56, Camp Kilmer, the Hungarian refugee camp, was also there. It is a very strong and cohesive, but old community. However, it has been quite touching to see the event opened by the same person for almost 50 years or the amount of grandparents and grandchildren to be at the same community center at the same time, like in a village in Hungary.

What about New York?

New York is different; I would say it is a ‘parking house.’ Those who come here are adventurous, hard workers. However, some of them are going home or moving away. When people start a family, they would rather move to New Jersey or Boston, because it is very difficult to live here for the middle class. Unfortunately, the community is rapidly changing and we have to adapt to that. I have been leading my folk dance group for six years now and since then, its members have changed two or three times over. They come, stay for a couple of years and then go. However, it is a good thing that the house attracts Hungarians from a larger area. There are people who are willing to travel about one and a half hours for our programs.

Does the house attract non-Hungarians as well?

Of course. The rule is that we need to explain everything in Hungarian, but we have begun including those who only speak English as well. It is important not only to preserve our culture but to show it to non-Hungarians. 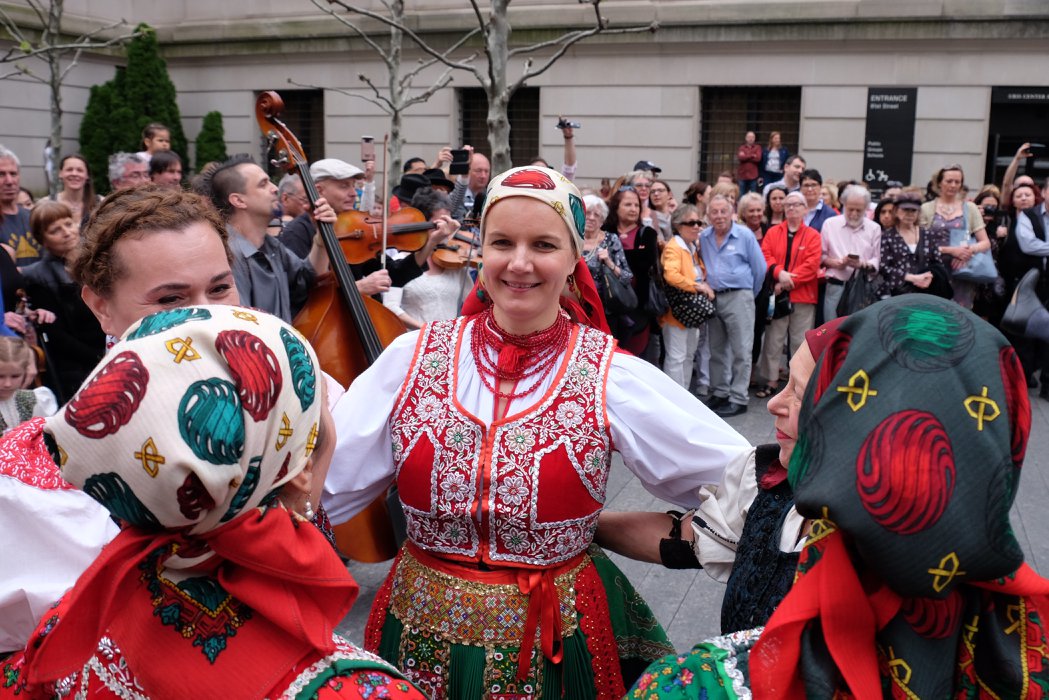 What kind of programs do you have?

We organize approximately 20 special programs, mainly around the holidays when members of the community are more likely to come. In addition, there are seven or eight permanent programs weekly which we organize with the other owners of the house, such as Hungarian language lessons, folk dance, the Hungarian school and scouting, Hungarian Mommy-and-Me class. Plus, every Tuesday for fifty years the Társaskör gather together and play cards. I always say that the whole history of the 20th century comes alive at that card table: there is a baroness from Transylvania, ‘56 refugees and Holocaust survivors. They are amazing.

You mentioned that most people expect a service from you and the House. Do they expect too much sometimes?

The other Hungarian community centers always say that in New York, it’s certainly not that hard to attract participants for our programs. It is true that there are many Hungarians and the city never sleeps, but that’s why we have to compete with New York and all its programs. For example, the Metropolitan Museum is in the neighborhood and if I’m organizing an exhibition, I’m practically competing with the MET. I once invited film historian Gábor Gelencsér for a debate and screening of Sindbad. The community informed me that there are far better cinematic experiences for $10–some even with sound coming from the chairs. Our program is always measured against the thousands of other programs New York has to offer. 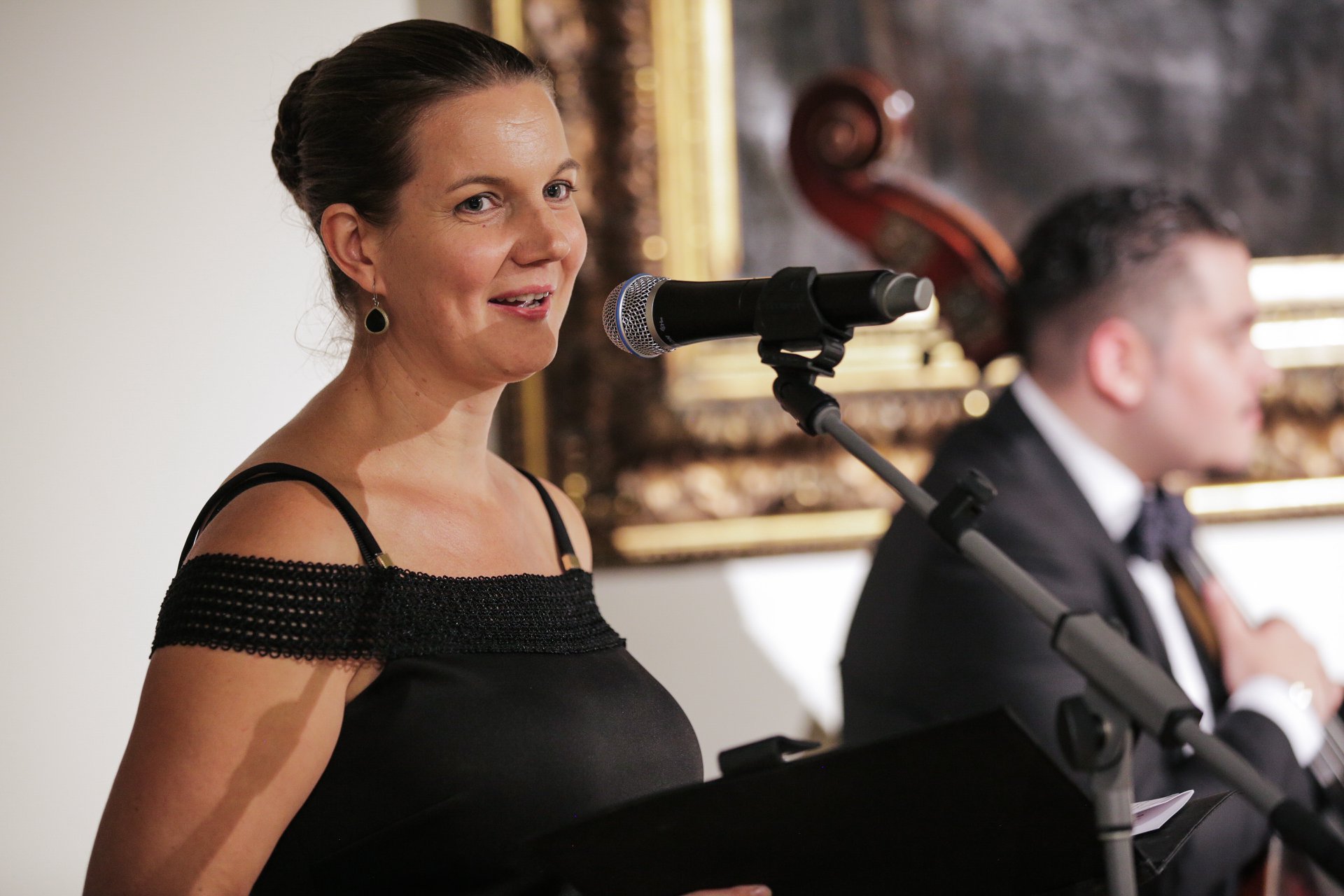 You also mentioned that sometimes you ask your friends for help. Is it that difficult to find volunteers?

Yes, for example, Nikolett Pankovits, an excellent jazz singer who recently performed at the Lincoln Center, will be the ticket collector at the opening day of the the 3rd Hungarian Heritage Festival. Usually, everyone is a volunteer; there are no employees at the Hungarian House, not even me. I am simply glad if people even come to the programs and are interested. I do not expect them to collect money or clean. But I always say–as a Hungarian lady in California once said–that knowing you are not the only one who spends Friday night cutting papers, glueing pictures and preparing lesson plans for the next day’s Hungarian school is a big source of encouragement.

At least you have an event room and your own house in Manhattan. Is it hard to maintain the House?

Everyone says how good it is for us New Yorkers that we have our own house. Yes, it’s great, but if we do not organize any events, it still costs 50,000 dollars a year just to maintain the house. We do not have the Hungarian state or local government as a maintainer or financer. We must collect this amount, even if we do not have any community programs. Unfortunately, if the timing or the weather is bad or it clashes with another program, people will not come. A couple of time I even used my own money to pay for the room rental after a less successful event because even we pay room rental after our own event.

How do you manage to get money for all the expenses of the House? I imagine entry tickets are not covering it.

Yes, and these are mostly self-supporting programs. For example, the proceeds of the concerts are paid to the performers. The Hungarian House has three pillars of income: tickets of our own event, room rentals for Hungarian and American cultural, community of private events and donations. Recently, tender applications from Hungary opened to us as well, which is a great help. Much of our programs–especially the highlighted programs, such as the third Hungarian Heritage Festival on the occasion of Advent–will be realized from the money from those. 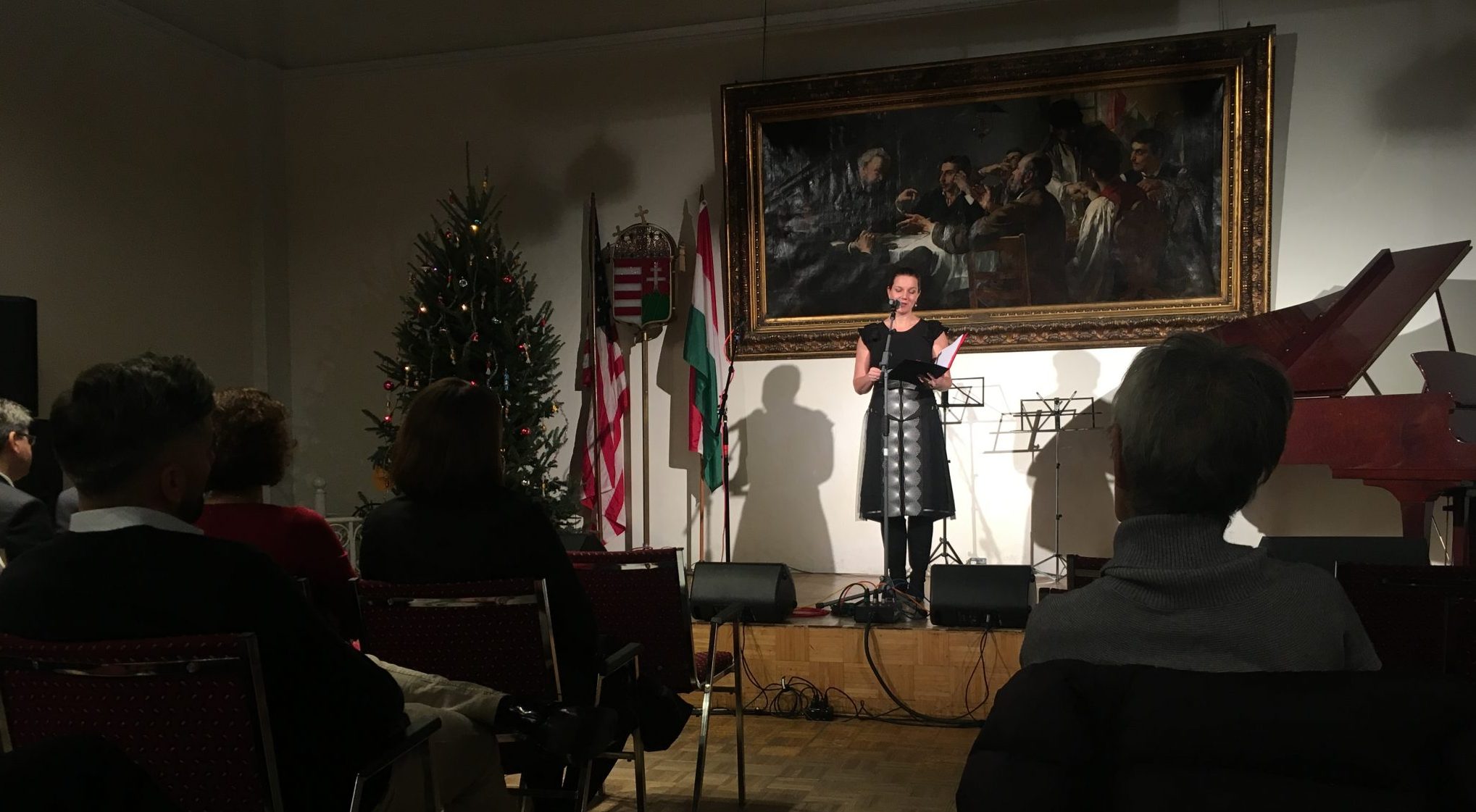 Aren’t you afraid that with the money won on tenders, Hungarian politics will filter into the life and programs of the Hungarian House?

I think that no matter who holds the power in the government of Hungary, it is legitimate, and as a leader of the house, I have to communicate with the legitimate powers and find the best way to cooperate with them for my community. Many politicians and state secretaries are visiting New York and want to see the Hungarian House. I always show the house to them and tell them how it works. This way the decision-makers will know what is happening in the diaspora. Because otherwise, how would they know from Hungary? However, it is very important that we do not politicize. So I do not allow any political events to take place in the house, not even for those who would pay for the room rental. It has happened before, during a Hungarian or an American election, where one of the party’s sympathizers wanted to organize an event here. But it would only divide people, and the aim of the house is to unite the community.

Reporting and translation by Fanni Kaszás