The international Human Rights Watch (HRW) “neglects the fact that Christianity is the most persecuted religion in the world”, State Secretary Tristan Azbej told public television M1 on Monday.

Azbej, who is in charge of Hungary’s assistance to persecuted Christian communities, reacted to critical remarks by HRW executive director Kenneth Roth concerning the Hungarian government.

Azbej referred to HRW as an organisation “associated with George Soros” and accused it of being “selective as to whom to assist”. He insisted that such organisations have “never stood by victims of attacks with a migrant background” and they “never speak about the 200 million Christians being persecuted worldwide”.

Azbej said that 3,000 people were killed last year because of their Christian faith, but “not only do these organisations decline to act up for persecuted Christians, they will… deny the suffering of millions of innocent people”. 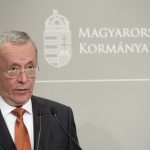