In central Europe, 61 million of the 83 million voters reject migration, a survey published by the pro-govt Nézőpont Institute on Tuesday showed.

Nézőpont asked by phone a sample of 1,000 in each of the nine countries involved in the survey of their opinion on migration.

In Hungary, seven million of a total of eight million voters reject non-European migration. In the Czech Republic, 8 million, in Poland, 22 million are against it, Nézőpont found.

The number of pro-migration voters is around or below 1 million in Bulgaria, Croatia, the Czech Republic, Hungary, Slovakia and Slovenia, it said.

In total, 61 million voters in the region reject and 16 million approve of migration, Nézőpont said.

The survey was conducted in Bulgaria, Croatia, the Czech Republic, Hungary, Poland, Romania, Serbia, Slovakia and Slovenia in February. 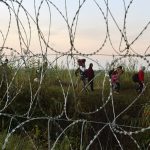