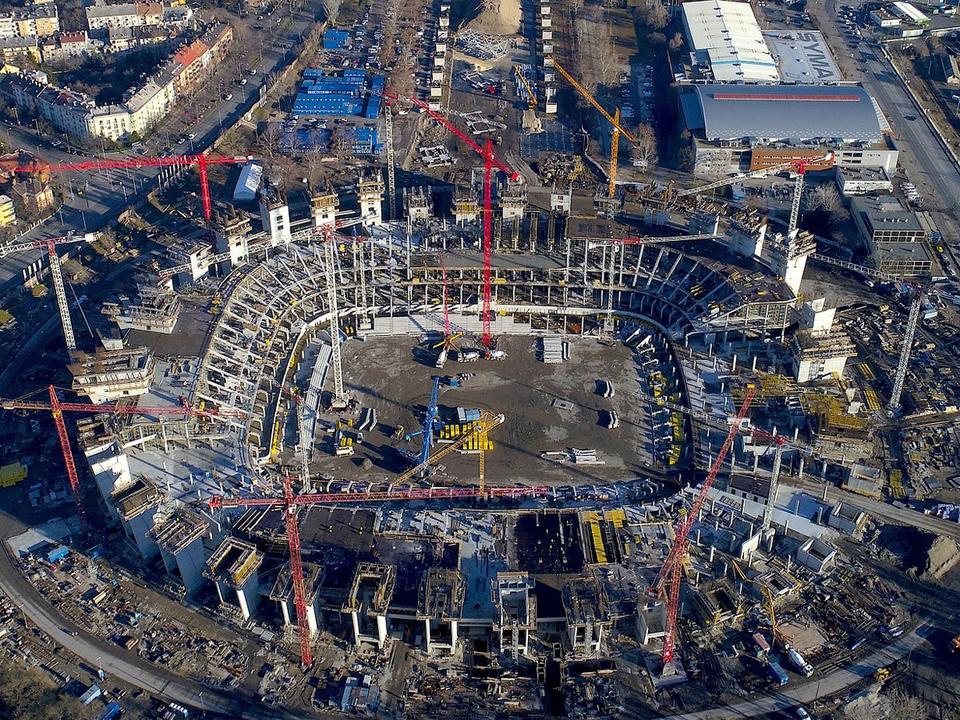 Balázs Fürjes, Government Comissioner for Major Budapest Developments, was the guest of the ‘Morning Start’ program of Hungarian sport channel DIGI Sport on Friday, where he spoke about the construction of the Puskás Ferenc Stadium and plans for the construction of an athletic center in the capital.

The expansion of the Puskás Ferenc Stadium started off more than two years ago, in March 2016 and since then, the old stadium has been completely demolished. Work is set to be finished by the end of 2019, as the stadium has to be ready for the 2020 European Football Championship in Budapest. Fürjes said:

They are keeping the pace of construction works. Although the beginning of the year was difficult, as February and March were surprisingly cold and wet, they had to be ready for autumn. If they miss the deadline, they have to face serious contractual penalties.

According to Fürjes, the UEFA delegations, who regularly travel to Hungary to have a look at the construction, are happy to see the progress of the construction and Sándor Csányi, chairman of the Hungarian Football Federation (MLSZ), who previously complained about the delays, is also satisfied. Csányi, chairman-CEO of OTP Bank, an important ally of PM Viktor Orbán and the governing Fidesz party, who is the richest man in Hungary, was recently named Vice-President of FIFA.

Balázs Fürjes has also spoke about a new athletic center planned in Budapest, saying that the building is primarily needed because there is “a burning lack of athletic training and competition opportunities in the capital” and Budapest lacks a proper athletic stadium for organizing international competitions and the athletes don’t have a permanent training center. He added that the Hungarian Athletics Association will apply for the organization of the 2023 Athletics World Cup, and that the government will support their tender. The stadium has to be completed by 2023 in case they will win the bid.

Fürjes also claimed that it is a coincidence that the same company won the tender to plan the new athletic center as the one that planned the Duna Arena, as it was an open, anonymous competition and the name of the winner was only revealed after the announcement of the result. He said the athletic stadium will be able to accommodate up to eight thousand people, which is enough for domestic and international tournaments, and it will be expandable in the event of major international competitions.

The Hungarian government’s stadium-building scheme, and what the Guardian has described as PM Orbán’s “reckless football obsession”, is subject to constant criticism from opposition parties. When construction works started, right-wing opposition party Jobbik  called on the Hungarian government to reveal the reasons behind the soaring reconstruction costs. They implied that the cost of the new stadium will be among the most expensive in western Europe based on costs in relation to capacity. In 2011 the construction was budgeted for 35 billion forints (around EUR 112 million); that number rocketed to 190 billion (EUR 610 million) in 2018. While the Puskas Stadium costs 638 million euros (HUF 200 billion), Arsenal’s stadium cost 461 million (HUF 146 billion); Allianz Arena, the largest stadium in Munich 340 million (HUF 150 billion), and Benfica’s similarly-sized Lisbon stadium was only 118 million euros (HUF 36 billion). The recently closed Hungarian daily Magyar Nemzet implied earlier this year that not just the costs of construction but the maintenance of the stadium will also be high.