Gergely Karácsony, Budapest’s new mayor, has set out the principles which he said would guide the city’s leadership in the next five-year municipal cycle.

Speaking at the new municipal assembly’s first meeting after his oath-taking, Karácsony said there should not be any “second-class” citizens in the city.

He said municipal leaders must serve the interests of residents.

Further, people have a fundamental right to a roof over their heads, he said.

Also, the city will contribute towards efforts to combat climate change. City leaders, he said, will work to protect Budapest’s architectural heritage and natural environment, and preference will be given to sustainable forms of transport.

Karácsony called for a balance between the development of inner districts and the outskirts.

He also signalled the promotion of the city’s cultural diversity.

The mayor pledged that city leaders will consult residents on all major issues. The city’s operations must be transparent and free of corruption, he added.

The new assembly will build “a new kind of cooperation” both with the districts and the central government, Karácsony said. The capital “must not be subordinate to any government” but an equal partner, he insisted.

Nobody must decide about Budapest residents without their contribution, nobody must strip them of what is theirs and nobody must deprive Budapest of its future. Budapest will not allow its autonomy to be restricted”

The general assembly elected as deputy mayors DK’s Erzsébet Németh Gy, Kata Tüttő of the Socialist party, Dávid Dorosz of Párbeszéd, political scientist Ambrus Kiss who sits in the assembly as an independent, and Gábor Kerpel-Fronius of the Momentum movement.

It also accepted amendments to the authority’s organisational and operational regulations enabling the mayor to propose to the assembly to fast-track submitted bills. It also decided to set up a committee for climate and environmental protection.

Meanwhile, Csaba Horváth, the mayor of the 14th district, told a press conference that the Socialists have the most representatives in the new Budapest assembly. “Budapest will no longer be in opposition; a new majority has been formed,” he said before the assembly meeting.

The Budapest general assembly consists of 33 members: the directly elected mayor, the mayors of the capital city’s 23 districts and 9 representatives who have won their mandates via compensation party lists. 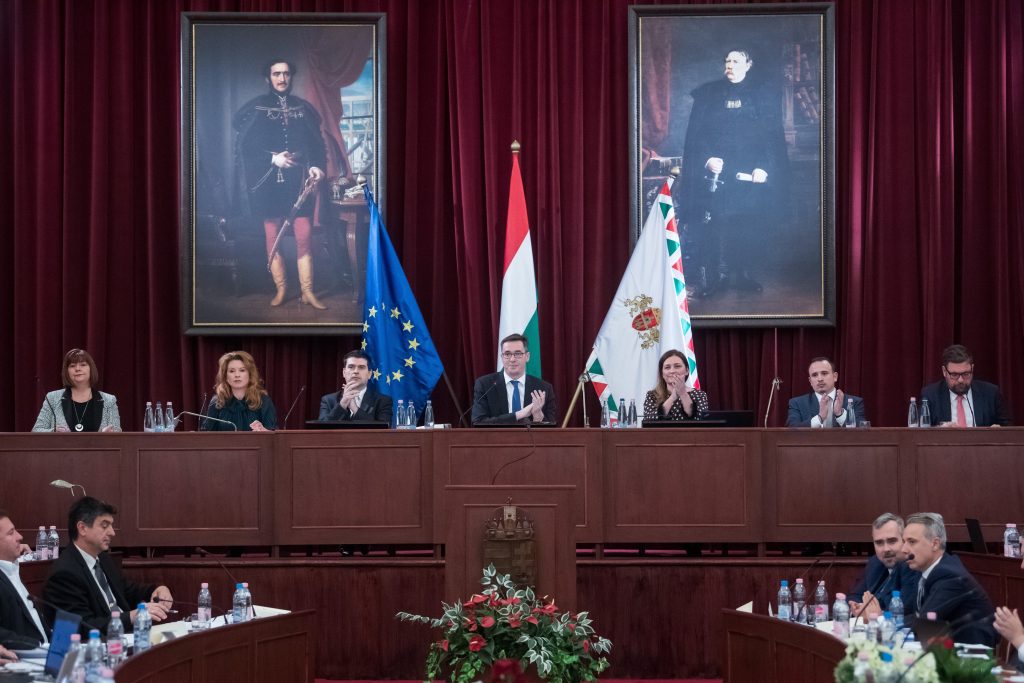 The opposition parties have 17 representatives: 7 Socialist, 4 Democratic Coalition (DK), 4 Momentum and 2 Párbeszéd. The Fidesz-KDNP (Christian Democrats) have 13 representatives while 3 sit as independents.

Karácsony was backed in the local election by Momentum, DK, the Socialist Party (MSZP) alliance with Párbeszéd and LMP.

In the featured photo: Gergely Karácsony. Photo by Zoltán Balogh/MTI