Talking about persecuted Christians must gain legitimacy across the world, Zsolt Németh, the head of parliament’s foreign affairs committee, said on Wednesday, the second day of an international conference on the subject in Budapest.

Németh called for a “paradigm shift” in diplomacy “the essence of which is that we talk openly about the persecution of Christians. That open speech must be applied in multi-lateral diplomacy and in the area of human rights, too.”

Talking about the persecution of Christians will help avoid “double standards under which more harm could be done to Christians than to others”, he said and added that “this would harm democracy and human rights in the United Nations world order”.

Zoltán Balog, the prime minister’s commissioner for social affairs, said that Hungary helps persecuted Christian communities “for itself because if Christians living at the source of Christianity are killed, our own culture and faith will be killed, too”.

Apostolic nuncio Antoine Camilleri said in his address that a globalising world will not automatically create equality between people. Opportunities for manipulating information easily and fast pose a real threat for democracy and the freedom of religion, he said. He warned of the power of companies with huge databases and said that businesses such as Google, Apple or Facebook have become superpowers like the US, China or Russia. 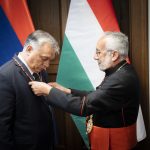