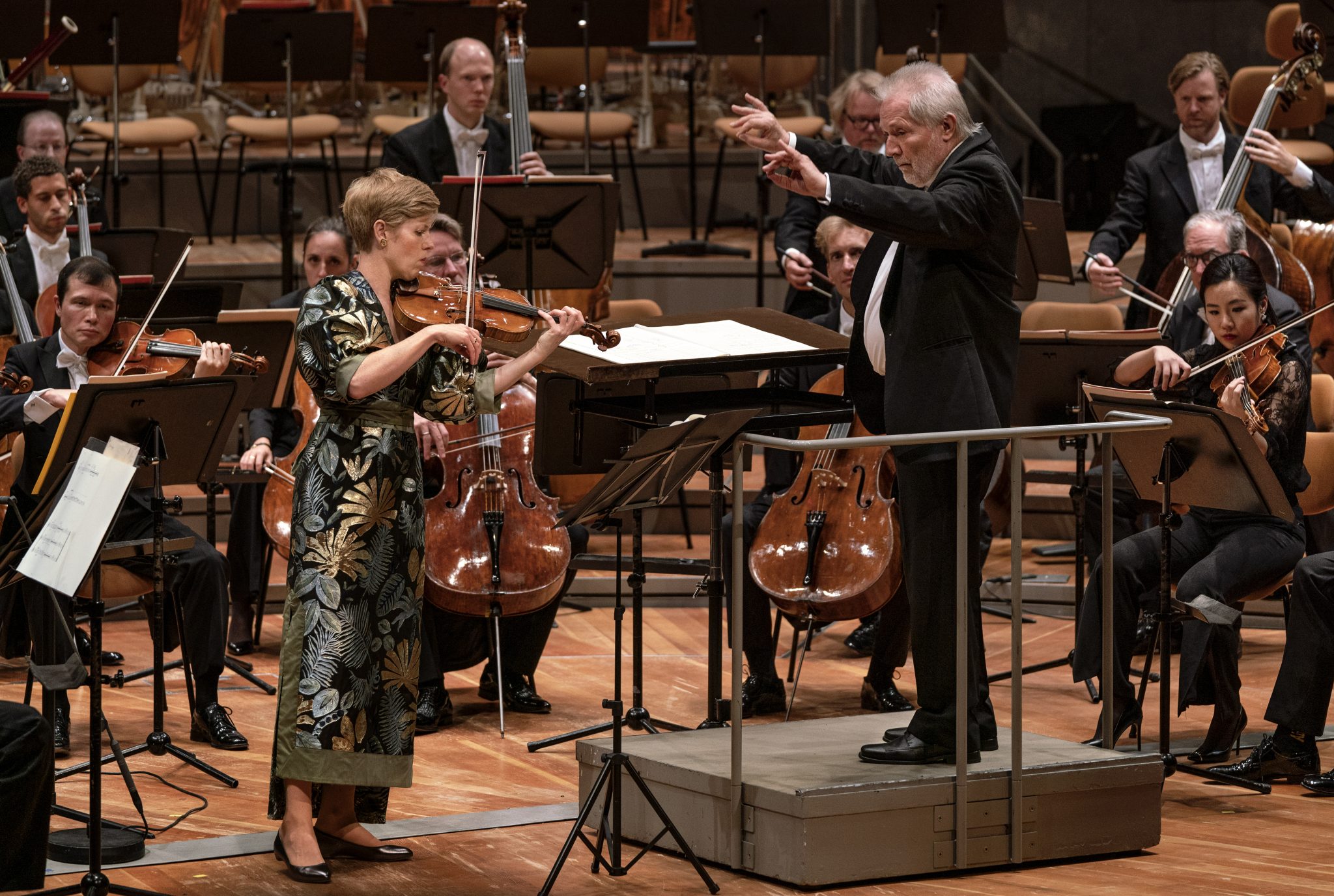 Hungarian composer/conductor Péter Eötvös belongs to the world. Hungary can claim him as a native son and local hero, but this artist’s global renown and accomplishment is seemingly without any borders or even categorization. The creator of ten operas and multitudinous orchestral works, and recipient of numerous prizes and thousands of accolades, Eötvös, now 75, shows no signs of curtailing his musical kaleidoscope; in fact, it is expanding exponentially.

Maestro Eötvös spent the weekend of 7-8 September in the hallowed halls of the Berlin Philharmonie, as guest conductor of his own music as well as works by other contemporary composers, all under the aegis of the yearly Musikfest Berlin. He led an afternoon chamber concert with members of Ensemble Musikfabrik, and two evening orchestral concerts with the Berlin Philharmonic — with nearly 100 of their musicians. 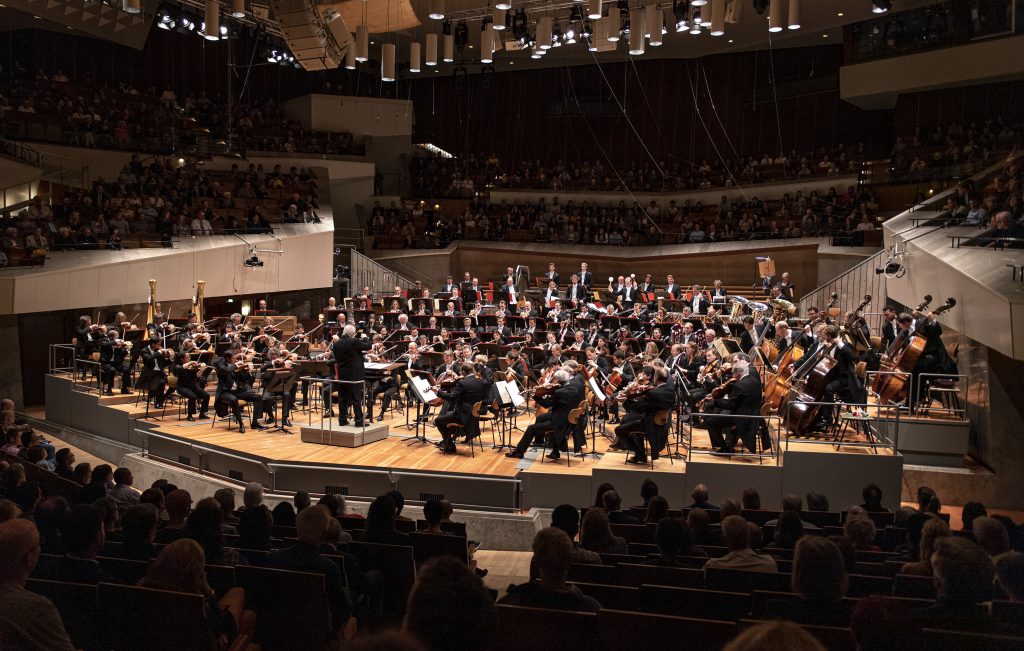 The weekend’s featured composition (performed on both evenings) was the German premiere of his third violin concerto: “Alhambra,” (2018) which was co-commissioned by the Berlin Philharmonic and written for and performed by violinist Isabelle Faust. Other shorter pieces of his were performed in the chamber concert.

Péter Eötvös not only embraces the new in music, he contributes to it, with distinction,”

writes Colin Anderson in classicalsource.com review of “Alhambra.” This vibrant opus references southern Spain’s Moorish past with a surreal soundscape of dreamy exoticism wherein the violin’s solo voice appears like a ghost at both the beginning and the end. Describing that solo, the German music blog, Hundert11.net wrote:

Faust transforms [the environment] with enchanting tone through a thousand colors and atmospheres.”

Obliquely referencing the East-West textures previously invoked in the last century by Debussy, Ravel, and Falla, Eötvös’ 21st century take on the same scenario used a blissfully inspired orchestration that includes a mandolin, which punctuates the breathless evanescence with a tinge of folkloric color. 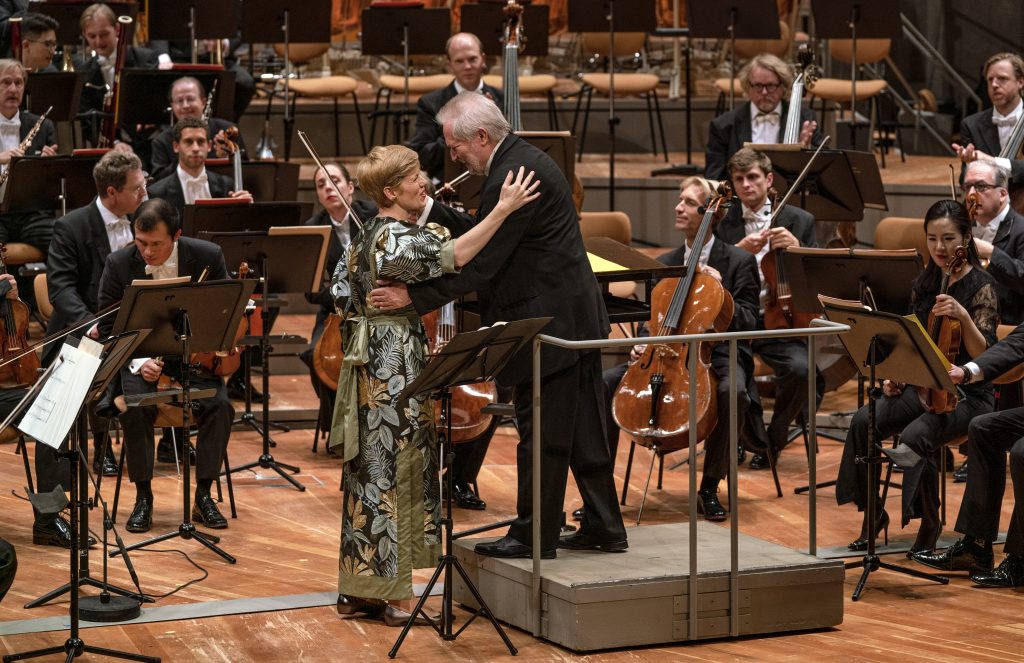 Shifting the setting from medieval Spain to 19th century Japan in the chamber concert on 8 Sept., another recent Eötvös score, “Secret Kiss,” employed the extraordinary voice of speaker/singer Ryoko Aki. She intoned the Japanese translation of Mari Mezei’s Hungarian text that was based on an Italian novella, “Seta” (silk). Accompanied by flute, clarinet, violin, cello, and percussion, her eerie monotone and motionless body language was a stark contrast to the almost unbridled emotionality delivered within the extended sounds of certain vowels. The minimal accompaniment of disembodied flutterings and filigreed phrases served to emphasize the ephemeral delicacy of an imagined romance that only manifested itself through drinking from a lover’s teacup. Eötvös’ “Sonata per sei” (Sonata for six) for two pianos and three percussionists completed the musical odyssey in the spirit of Bartók’s angular and precise works for the same instruments. 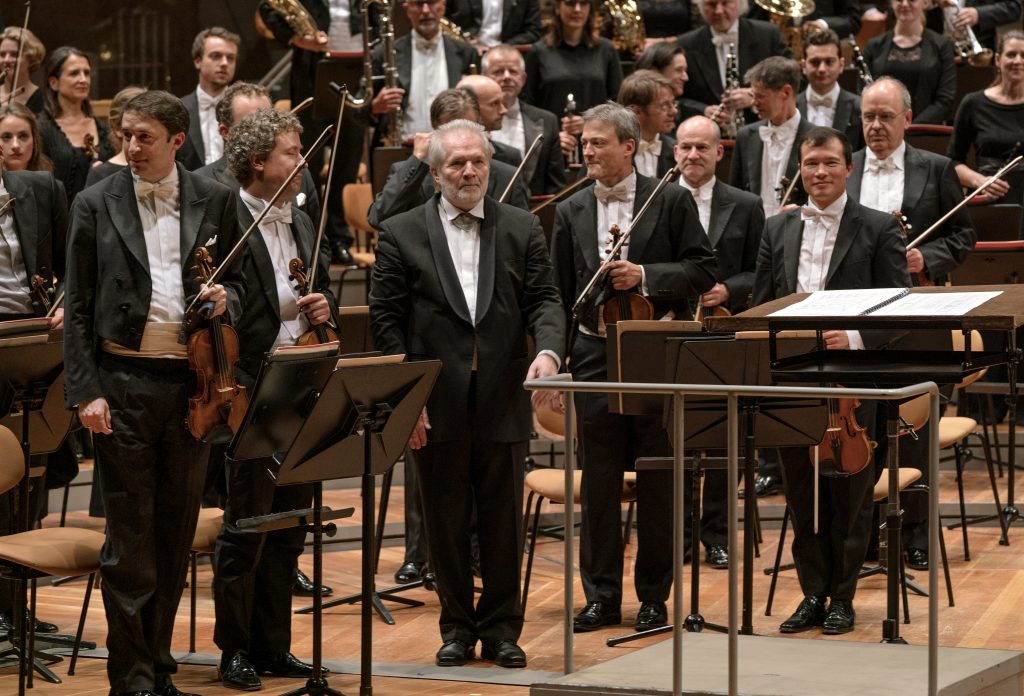 Péter Eötvös and the Berliner Philharmoniker. Photo by Martin Walz/www.martinwalz.de

Eötvös’ busy yearly schedule would leave much younger colleagues in a state of exhaustion. In 2019 alone, he is booked for 35 major engagements around the world, which include such orchestras as the Berlin Philharmonic, the BBC Symphony, the Concertgebouw, the Bayerischer Rundfunk, and the Czech Philharmonic. His compositional output is a steady stream of commissions for major musical ensembles and organizations.

But Eötvös is more than just a celebrated creature of the musical stage: he is an educator with a deep history. Since 1991, he has maintained a foundation in Hungary that serves many musical and mentoring purposes. Its first incarnation, called the International Eötvös Institute Foundation (originally residing at Gödöllő castle), received endorsements from Otto von Habsburg, Madame Georges Pompidou, Pierre Boulez and György Ligeti. There, he developed collaborative programs with European orchestras, universities, and other partners to educate musicians in 20th century music. 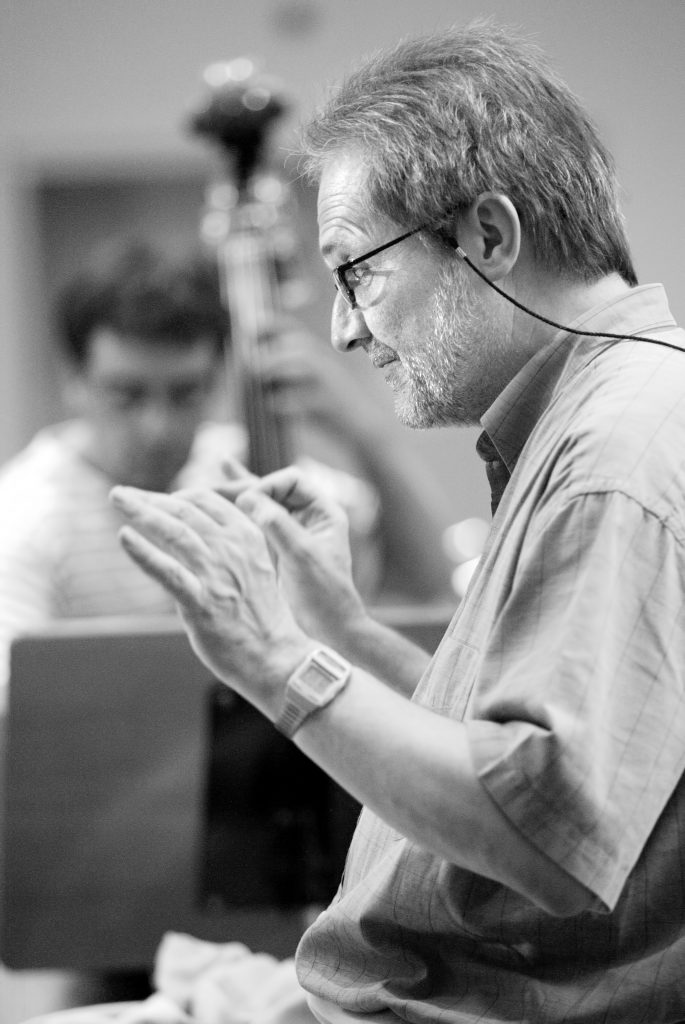 As contemporary music morphed to accommodate new modes of expression, he changed the name of the organization in 2004 to Eötvös Péter Contemporary Music Foundation and the location to the Budapest Music Center, a facility that hosts prominent international artists and composers. In addition to Budapest, other European locations have been the points for training a multitude of young aspiring conductors, among them the Swiss-Australian rising star Elena Schwarz. She said in a recently published interview in Musicalamerica.com:

Péter believes no two gestures should be the same. His approach is less spontaneous [and more of] one of careful analysis and personal rigor. That’s something you also see in his work as a composer.”

So what explains this man’s incredible musical preeminence? Eötvös was born into a musical family in multicultural Transylvania (like Ligeti and György Kurtág), then grew up in Miskolc (where he met Ligeti) and Budapest. He entered the Liszt Academy’s School of Exceptional Young Talents at the age of 14 — an opportunity engineered by Zoltán Kodály. After graduating with a degree in composition, he took his first job working for the Cologne Opera while also working alongside the eminent composer Karlheinz Stockhausen. In 1978, he was invited by Boulez to become the first musical director at the newly-founded IRCAM (Institute for Research and Coordination in Acoustics/Music) in Paris, working primarily with the Ensemble InterContemporain. 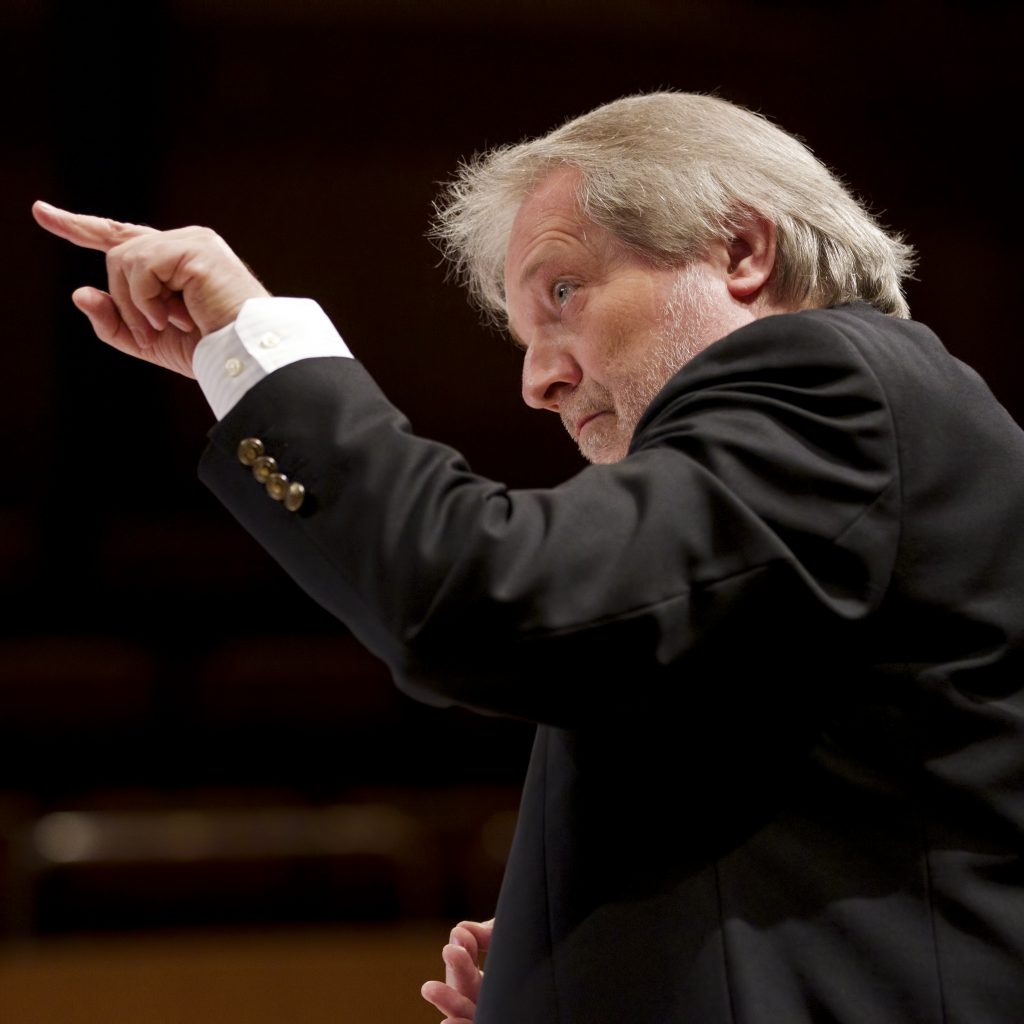 Tod Machover, a composer colleague at IRCAM, sums up his early experiences with Eötvös with great reverence. In recalling a pivotal lunch conversation in 1979 wherein Eötvös gave Machover a good-news/bad-news assessment about his latest composition: “Peter complimented me for what he liked … but also gave me precise, tough criticism. I didn’t agree with everything he said, but I learned more from those honest … comments than from just about any other mentor at any other time.”

Peter was – and still is – a mentor to many of us, a model of integrity and professionalism. As his own musical oeuvre has flourished, he has remained a deeply valued colleague, pushing others to perfection and burnishing the whole field of new music.”

The Berlin weekend’s programs at the Philharmonie also included performances of hand-picked gems from the repertoires of Iannis Xenakis and Edgard Varése, as well as several by living composers Helmut Lachenmann and Toshio Hosokawa. But it was clear by the phenomenal public response on both days that Eötvös is a revered and respected artist that has long earned his position in the pantheon of living composers. Violinist Faust told Hungary Today that what he wrote for her was “very natural for me — I don’t need to be someone else to play it. He’s the sweetest person: he’s very encouraging, as both a man and an artist.”

Upcoming concerts celebrating Eötvös as ‘Artist of the Year” at MÜPA: 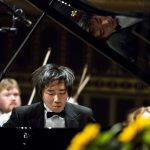 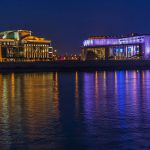