The biggest public park of the Hungarian capital, the Budapest City Park (Városliget), has been in the spotlight recently due to large-scale plans for the area’s modernization. Although the designers envision a new central “musemsquartier” of Budapest, many raise concerns over the controversial plans. Numerous trees would be cut out, including some very valuable and old ones. Moreover, the plans would make a lot of changes in the park’s original milieu, destroying its calmness, and totally changing the function of the “Liget”, critics say.

However, the city could have a real museum district, since the new National Gallery, the House of the Hungarian Music (concert hall), the new Ethnographic Museum would all move to near of the already existing Transport Museum, Museum and Library of Hungarian Agriculture and Museum of Fine Arts. According to the estimations, about 2.2 million more people would visit the park annualy after the reconstructions. Below you can see some gif images about the visualization plans, showing what would change in the City Park as a result of the modernization.

Visualization Plans of the National Gallery

Visualization Plans of the House of the Hungarian Music

Visualization Plans of the Ethnographic Museum 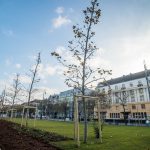