On Sunday afternoon, the Socialist Party (MSZP) posted a video on its official Facebook page of Lajos Korózs, MP of the party, talking to Athina Németh, a paramedic, about the victims of the government-ordered evacuation of hospitals. Since then, the National Ambulance Service has said in a statement that the woman in the video does not work for them. The Ministry of Human resources has filed charges against unknown culprits for spreading fake news and scaremongering, while the Socialist Party started an internal investigation into the case.

In the video, the woman talks about her announcement on Facebook stating that she could help provide care for ten patients who were sent home from the hospital. According to Németh, nine out of ten patients died in ten days because of the “irresponsible government action.” However, she said that nine of the ten patients died in a matter of ten days. The conversation also recalled three specific cases.

The National Ambulance Service (OMSZ) has responded to the video in a post on Monday, writing, among other things, that the woman had nothing to do with the organization, and was not on the register of health professionals either. Since the statement from OMSZ was published, the video is no longer available on the Socialists’ social media page, but they claim that the woman in question is a paramedic, but not with the OMSZ, but a private provider.

The woman was a guest on ATV’s Egyenes beszéd on Monday night, where she confirmed her statement that she had been working as a paramedic for 43 years, but had never been a member of the National Ambulance Service. She claimed that there is a private ambulance service that has been operating in Hungary since 1979, where she also works, but she did not want to name the ambulance service in question.

The woman was also repeatedly asked by Hungarian news portal Index about her employer, but she said if she revealed where she worked, the company would “not get a forint subsidy from the government.” She added that she would certainly have a job as a private nurse, but the company would be ruined. According to the woman, she is not on the basic and operational records of the State Health Care Center because she is unwilling to pay a membership fee.

On Tuesday afternoon, the Ministry of Human Resources announced that it would file charges against an unknown perpetrator for spreading fake news over the video posted by MSZP. The statement sent to Hungarian news agency MTI states that it turned out that the woman claiming to be a paramedic is not on the register of the national ambulance service, the Hungarian Chamber of Health Professionals, or the state healthcare center, and even the Samaritan ambulance service firmly denied that the woman had ever worked for them.

The Ministry said in their statement:

In EMMI’s view, the false allegations made in the video were particularly apt in the present emergency to provoke unwarranted unrest in society, undermine public confidence in health care, and thereby undermine the effectiveness of epidemic control.

They also added that the allegations, as well as the fact that the person saying them described herself as an ambulance officer, seriously violated the entire organizational system of healthcare, putting the professional honor of healthcare workers in the mud, which the ministry again rejects.

The opposition Socialist Party has started an internal investigation into the video posted on Facebook, commercial broadcaster ATV said on its website on Wednesday. The party’s deputy leader, László Szakács, told ATV that Socialist Party communications staff decided to make the video, and he insisted that those who made it bore the responsibility. He added that the MP in question, Lajos Korózs, was not at fault. He said Korózs had received many letters from the relatives of the patients affected by the government’s decision to empty hospital beds to make way for any potential COVID-19 patients, adding that, in his view, the lawmaker was not aware of any wrongdoing and should not have to resign.

Video was made by Socialist MEP’s assistant

This morning, several press outlets wrote that 168 Óra learned from several sources that Tamás Lajos Szalay, a former Népszabadság journalist and current assistant to the Socialist MEP István Ujhelyi, had made the party’s infamous Facebook video. They also reached Szalay on the phone, who himself acknowledged the making of the video, saying: “I was on the other side of the camera.” However, he declined to answer any further questions about the case.

Since then, István Ujhelyi announced that his direct colleague, Tamás Lajos Szalay, only provided technical assistance for the recording of the MSZP video in his spare time, and had no role in its preparation and content. He asked everyone to contact the press department of the party concerning questions related to the video. 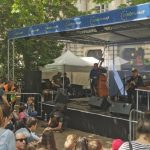