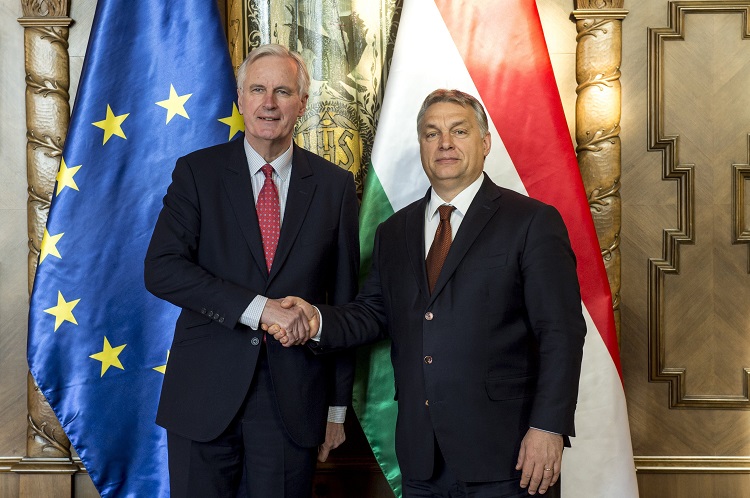 After Viktor Orbán suddenly announced that he would no longer support Manfred Weber as the lead candidate for president of the European Commission on Monday, pro-government news portal Magyar Hírlap tried to shed some light on the Hungarian PM’s political maneuvering. The news portal went so far as to claim that French politician Michel Barnier might be Orbán’s new “secret favorite” for president of the commission.

There are a few reasons why this is not entirely outlandish. A recent article published in Politico describes how Michel Barnier has been “stepping out of the shadows.” Apparently, Barnier has been busy conducting a shadow campaign across the EU, meeting with various prominent political figures.

Interestingly enough, this wouldn’t be the first time Viktor Orbán has supported Michel Barnier. In 2014, the Hungarian PM voted against Jean-Claude Juncker for EPP Spitzenkandidat and despite supporting the Luxembourgian politician throughout the entire campaign, pulled support the night before the election. Consequently, he wanted Barnier (or someone else) to acquire the position. According to leftist daily Népszava, Fidesz Top Candidate and potential member of the next commission, László Trócsányi, has already conducted secret talks with Barnier to discuss possibilities for cooperation.

First of all, Weber is regarded – even by many EPP supporters – as a lackluster candidate. And as Politico points out, he has never held an important governing or executive position. Barnier, on the other hand, is a true political veteran. He is a two-time European commissioner, former Minister of multiple areas back home in France and one of the lead negotiators from the EU on Brexit.

But what gives the rumor credence most of all is the possibility that French President Emmanuel Macron – who already appears skeptical of the whole “Spitzenkandidat” process – might throw his support behind the French politician.

As Spiegel emphasizes in an article, there have been several rumors in the past about Macron asking Barnier whether he would be interested in running for office for La République En Marche (Macron’s party).

With Macron in the picture, there could be a change of plan, and the next president of the commission might not be from the list of current lead candidates. Macron – who is clearly trying to create a new centrist-liberal political force in Brussels – has already given clear signs that he will strongly oppose the EPP’s current lead candidate. It would only take a few other leaders siding with him at the special summit in late May to effectively kill Weber’s chances. (Interestingly enough, one of the main ‘charges’ against Weber is that he’s too lenient towards ‘populists’ and ‘nationalists,’ like Orbán.)

The real question is what could Orbán gain by supporting Barnier, given that European leftists, and Macron, in particular, view him as a more acceptable, and perhaps preferable, candidate.