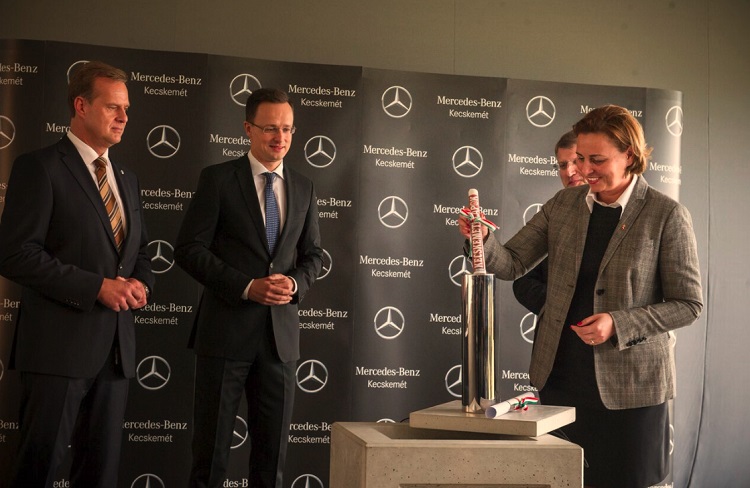 German luxury car manufacturer Mercedes-Benz has announced a HUF 185 billion (EUR 594.6 million) investment project at its Hungarian plant in Kecskemét, central Hungary, on Friday. This already includes the EUR 250 million to be spent on a new, state-of-the-art automobile bodywork unit, with a floor area of 99 000 square metres.

The remaining EUR 330 million will be spent on technological developments and preparations for the production of new compact cars. It is not yet public which model or models these will be. “The Best or Nothing – Mercedes’s slogan goes; the company opted for the best when it chose Hungary and Kecskemét”, Péter Szijjártó, Hungary’s Minister of Foreign Affairs and External Economic Relations, said at the investment’s ground-breaking ceremony. He expressed his conviction that the government was right to pursue an economic policy with the aim of making Hungary the centre of high value-added activities in Europe. Together with the investment being started now, the German company’s investments in Hungary total over HUF 500 billion in value, the foreign minister revealed. Mr. Szijjártó also emphasised that in terms of volume, the present project is the largest investment announced in Hungary over the past one and and a half years. The last announcement of similar magnitude was Indian tyre manufacturer Apollo Tyres‘s project in September 2014, he said. Over the past approximately four years, Mercedes, one of the world’s largest and most innovative car manufacturers, has produced more than half a million cars in Hungary, an achievement all Hungarians can be proud of, Mr. Szijjártó pointed out.

The Germans are highly content with how the Hungarian unit has been performing, which is no wonder as the Kecskemét-based plant has been showing outstanding figures. Daimler manufactures in Hungary the models for the most sought-out segment (compact cars), namely the B-Class, CLA and CLA Shooting Brake models.

via mandiner.hu and portfolio.hu
photo: Zsolt Burger and Sándor Ujvári/MTI