President János Áder has re-appointed György Matolcsy as governor of the National Bank of Hungary for another term, on the proposal of Prime Minister Viktor Orbán, the president’s office announced on Thursday.

Matolcsy’s six-year mandate as NBH governor will end on March 3, 2019, and his next term start on March 4.

The new-old governor will take his oath of office on Friday.

On the featured photo: György Matolcsy. Photo by Szilárd Koszticsák/MTI 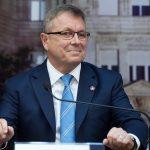 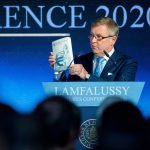