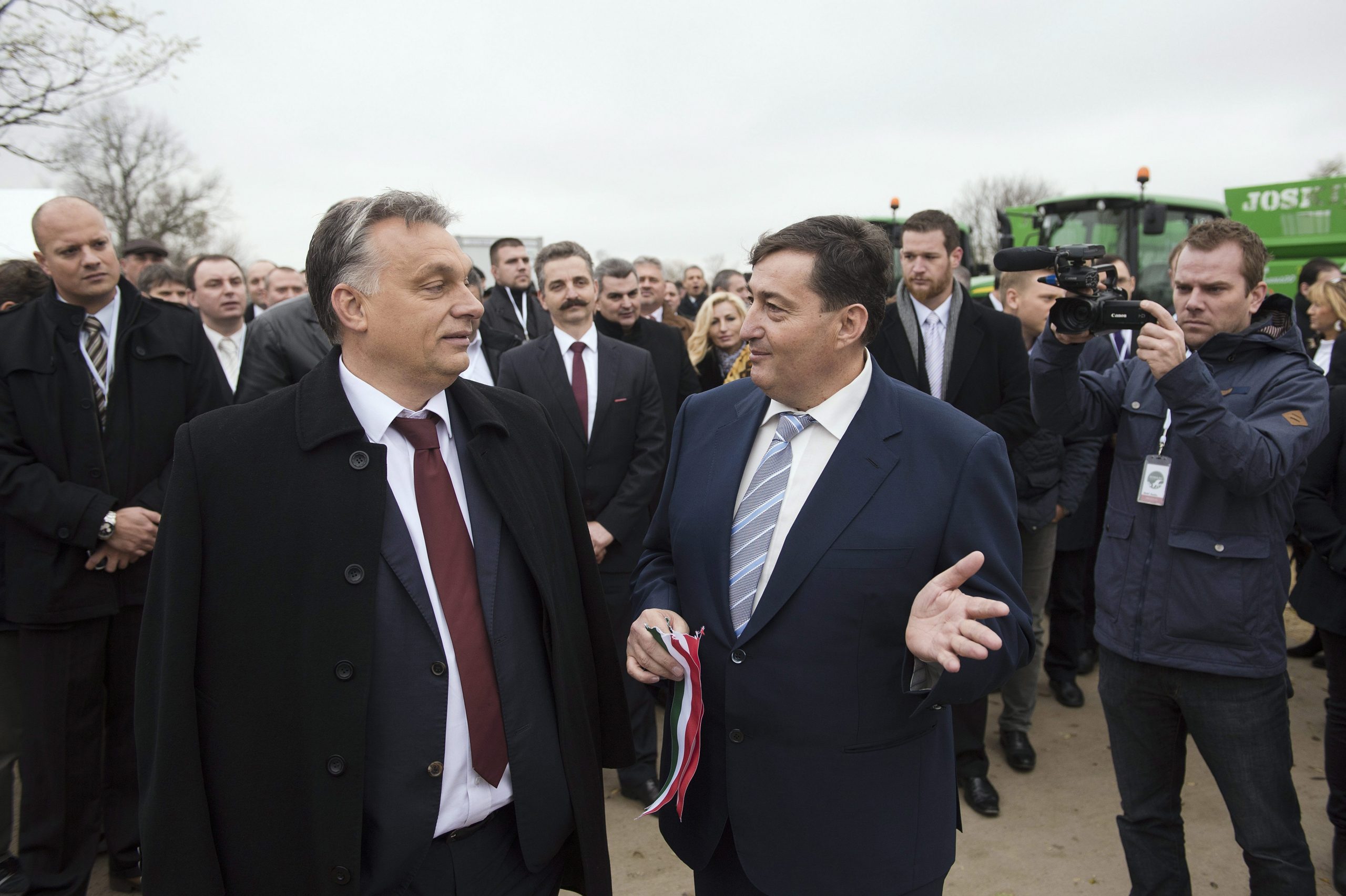 Lőrinc Mészáros has become the richest Hungarian, according to the latest, top 100 list put together regularly by a team led by Péter Szakonyi. The Prime Minister’s fast-emerging, childhood friend’s wealth has increased by some HUF 185 billion (EUR 535 million) in the last year, overtaking OTP Bank Chief Sándor Csányi, who has been in a top financial position since 2011. Both the Prime Minister and the opposition commented on the results.

According to the creators’ estimations, Lőrinc Mészáros’ wealth at the moment amounts to HUF 455 billion (EUR 1.3 billion), while Sándor Csányi “lags behind” with HUF 420 billion (EUR 1.2 billion). Docler Group owner György Gattyán, who amassed his wealth thanks to his adult-content streaming site, LiveJasmin, is the third with HUF 305 billion (EUR 883 million).

The listing has also revealed that the ten richest Hungarians own roughly HUF 2,506 billion (EUR 7.3 billion) worth of assets, HUF 669 billion more than one year prior.

Mészáros, a gas engineer by profession, has become the richest man in Hungary over the course of the past eleven years. His rapid rise, in large part thanks to the huge number of state and EU contracts won by his companies, has naturally led to controversy and criticism with many supposing favoritism and corruption in the background. In addition, speculations go as far as to suggest that his companies act as an informal slush fund for the Prime Minister. The list (and Mészáros’s emergence) has come up once again at the recent governmental press briefing, surprisingly held by the Prime Minister himself.

Orbán regularly refuses to comment both on his family’s (his son-in-law István Tiborcz is 37th on the list) and Mészáros’s companies’ economic success, saying that politics and business should be kept separate and that he and the government have no competency in business matters. This time he answered in the same kind, saying that rich people in Hungary must respect two principles: “All rules must be followed and all taxes must be paid,” adding that more revenue leads to more taxes, which is good for the budget. In a general reflection of the list, Orbán also stated that out of the 100 richest Hungarians, 80 are still coming from the left, meaning that “…we are still far from the desirable balance.”

He also explained that unlike the left (naming former left-liberal PMs Gordon Bajnai, Ferenc Gyurcsány, and Péter Medgyessy who all came from the business world), the politicians on the right seek to keep themselves away from business.

Mészáros’s first place status and further enrichment, together with Orbán’s comments have angered the opposition. “Viktor Orbán’s…, or rather, Lőrinc Mészáros’s wealth, increased by HUF 185 billion during the crisis (…) There isn’t any more obvious example of the government’s economic crisis management, this is when 1 percent of the privileged get rich at the expense of the rest of the 99..,” the Budapest mayor commented. Besides highlighting several cases in which the government’s crisis management failed in his view, Gergely Karácsony insists that Orbán is competent in answering the question, as it was his government that provided three-quarters of the funds for economic protection for its own clients, out of which the largest part went to Mészáros’s interests.

Jobbik leader and PM candidate, Péter Jakab, in reference to the recently-announced national consultations said that “People should rather be asked if they think Orbán has anything to do with the immeasurable enrichment of his own family and Mészáros, and whether the stolen money will return to those who worked for him. Well, the mafia leader no longer consults nationally about this, because he knows the answer. And we know it. That’s why he will pay for everything!”

In reaction to the report, DK deputy parliamentary group leader, Gergely Arató said, “We all know what this means: [Prime Minister] Viktor Orbán has become the richest Hungarian through his middleman,” he said.

While the honest majority tried to cope with the coronavirus and the ensuing crisis, “…the Fidesz few, the prime minister among them, shoveled hundreds of billions worth of public assets out of the country,” Arató said, adding that these monies would be taken back if a new government entered office in 2022.

If the opposition alliance were to win the 2022 elections, a “state of corruption emergency” would be declared and the assets of “Fidesz oligarchs” frozen, Klára Dobrev, DK‘s prime minister-candidate, said. Dobrev has vowed to set up an independent anti-corruption prosecutor’s office and a special police force to investigate corruption cases. Furthermore, a government formed by the current opposition would want Hungary to join the European Public Prosecutor’s Office.

No surprise: Orbán keeps lead as Hungary’s most influential leader

The same team also put together 50 of the most influential Hungarian personalities along with the rich list (made subjectively by 11 political analysts). Somewhat less surprisingly, this year’s top ten virtually only consists of government and ruling Fidesz politicians or businessmen close to government circles:

In addition, Budapest mayor Karácsony (of opposition Párbeszéd) is the 22nd, while former PM and DK leader Ferenc Gyurcsány is the 27th. Gyurcsány’s wife, DK’s MEP and PM candidate, Klára Dobrev is 37th.