László Rajk, an architect and member of Hungary’s democratic opposition before the regime change, has died, the family told MTI on Thursday.

Rajk, a founding member and lawmaker of Hungary’s liberal Alliance of Free Democrats (SZDSZ) between 1990 and 1996, died on Wednesday, aged 70. According to epiteszforum.hu Rajk died after a short serious illness.

Rajk was the son of László Rajk, a communist politician executed in a Stalinist show trial in October 1949.

He was designer of a memorial of the victims of Hungary’s 1956 anti-Soviet uprising and revolution in the Pere Lachaise cemetery in Paris.

Rajk was set designer of theatre plays, exhibitions and films including Hungary’s Oscar-winning Son of Saul.

He was a member of the Budapest Municipal Assembly between 2002 and 2006.

In the featured photo: SZDSZ top candidates before the first free election in 1990. From left to right: Iván Pető, László Rajk, and Bálint Magyar. Photo via Fortepan/Bálint Magyar

Szijjártó: Hungary Responds to Attacks on Sovereignty and Traditions by Strengthening Christian Traditions 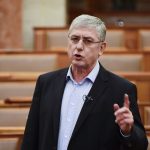 DK President Gyurcsány: ‘We Must Fight Until We Have Chance to Turn Wheel of History’