A pro-government and a conservative pundit agree that the Bavarian election result provides evidence of a systemic shift in German politics. They offer diametrically opposing interpretations, however, of the future prospects of centre-right parties in the new German political landscape.

Magyar Idők’s László Szőcs thinks that the main lesson of the Bavarian election is that the Christian Social Union needs to revise its moderate politics. The pro-government columnist explains the decline of the CSU with the rise of both the more anti-immigration AfD and the left-wing Greens. In order to regain its popularity, the CSU needs to take an even firmer stance to stop migration on the European level, otherwise even more voters will turn away from it, Szőcs contends. In conclusion, Szőcs writes that a strong CSU is important for Hungary because of the Bavarian car factories in Hungary. The CSU is an important ally of the Hungarian government, he reminds his readers, in its dispute with the EU over the Sargentini report.

On Mandiner, Gellért Rajcsányi believes that the Bavarian election results indicate a systemic shift in the wider German political landscape. The conservative pundit thinks that Bavaria is following the path of the rest of Germany. Throughout the country, the hegemony of the centrist parties has been challenged both from the left and right fringes, Rajcsányi writes. He believes that the challenge they represent is rather an opportunity to the CDU/CSU. In the new political landscape, an increasingly centrist CDU/CSU can entrench its power, Rajcsányi suggests, in opposition to the extremes of the periphery. As fringe right-wing and left-wing parties emerge, the CDU/CSU will successfully frame itself as the main moderate party that stands above radicals of all shades, he suggests. 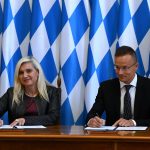