Parties of the opposition are “providing a cover-up” for those “profiteering from the prison business“, the group leader of co-ruling KDNP (Christian Democrats) said on Tuesday.

Lőrinc Nacsa argued that “none of the leftist parties” supported the government’s proposal to suspend payments of compensation to inmates complaining about poor prison conditions.

Nacsa insisted that the “prison business” — suing the Hungarian state for hefty compensations over crowdedness and bad conditions at prison — was benefitting lawyers linked to the leftist opposition and the “Soros network”.

He said it was “unfair and revolting” that “violent criminals, murderers and robbers are released from jail as millionaires”. “This will undermine people’s faith in Hungary’s jurisdiction. This is an unscrupulous and businesslike abuse of the law, which must be stopped.” 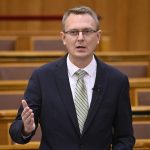