Waiting lists for scheduled operations have shrunk from 70,000 to 28,000 over the past five years, which is already near the European average, the human resources minister said on Monday.

The government launched a scheme in 2012 to reduce waiting lists to 180 days for patients in need of a major operation, and 90 days for ones facing a minor one, he said.

Of the 15 EU states keeping such records, Hungary is placed second in terms of cataract operations, he said.

Ildikó Horváth, the state secretary for health, said the ministry would devote special attention to the operations where the waiting time exceeds 60 days. Those waiting lists have also shortened by 46 percent since 2012, she said.

Patients have to wait longest, 128 days, for knee prostheses, she said. 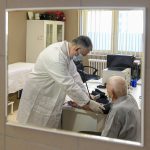