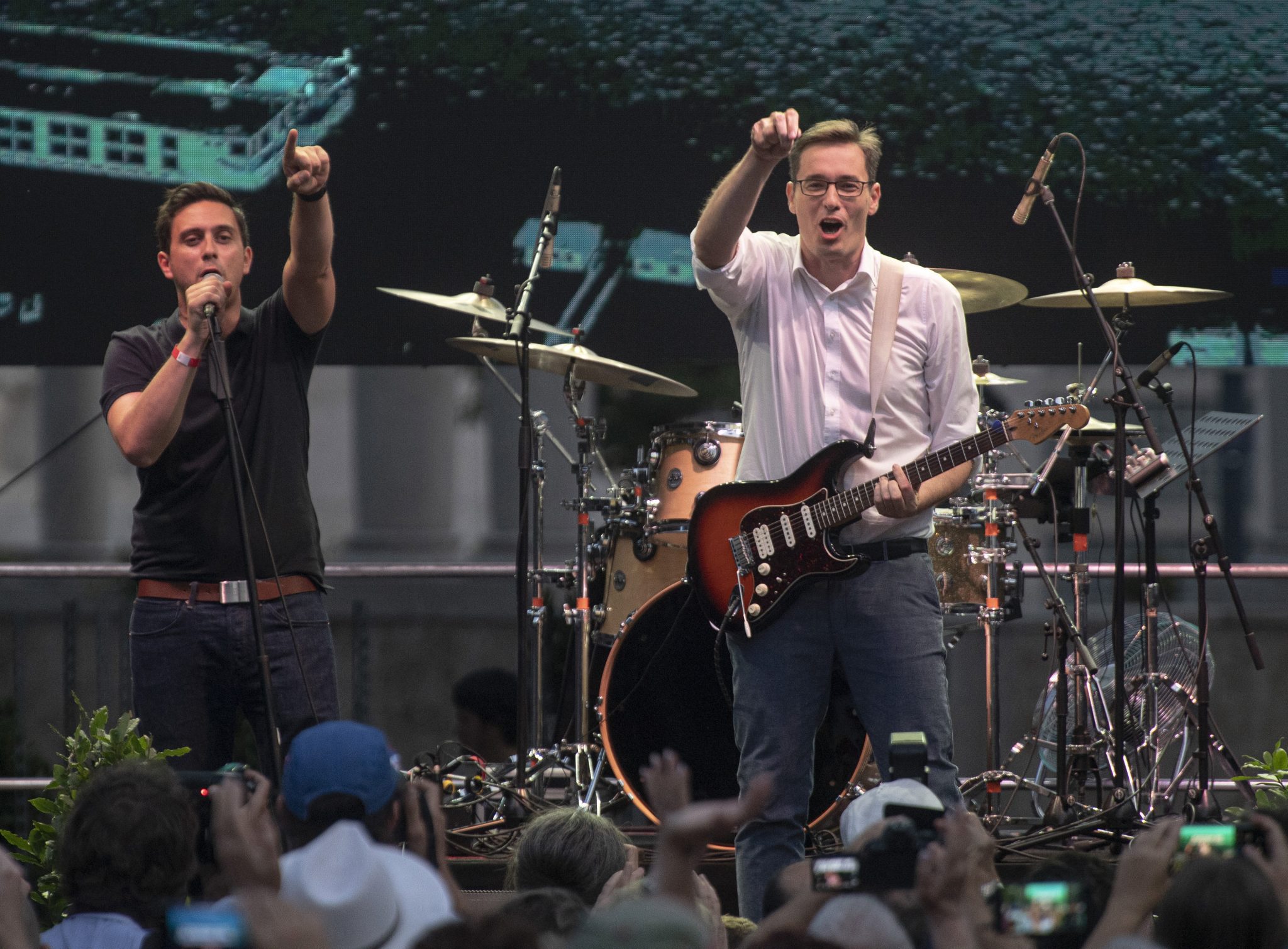 As a symbolic gesture, Gergely Karácsony and the opposition parties opened their municipal election campaign at Szabadság tér (Liberty Square) on Saturday. The official campaign song of the joint opposition Budapest mayoral candidate, called the Változás dala (Song of Change), was also introduced there. With lines like “Budapest will not be lower Felcsút” the song, performed by famous Hungarian actor Tamás Szabó Kimmel, was already posted on Facebook and Youtube on Monday.

Mayoral candidate Gergely Karácsony, appeared on the stage of the opposition’s local government election campaign on Saturday night in Liberty Square, with a guitar in his hands. The most popular opposition candidate and incumbent Mayor of  Zugló (Budapest’s 14th district), revealed he hadn’t played the instrument for twenty years after he played some chords from the “Song of Change.”

The song bashes ruling Fidesz government and incumbent mayor István Tarlós, with the lyrics evoking a system-critical citizen who is dissatisfied with the course of things.

Referring to the many football stadiums that have been built in the past years, the song goes: “Instead of trees, stadiums grow out of the ground.” Talking about the conditions in Budapest: “the subway is a sauna, the city is all dirty, taking a breath at Astoria is even harmful.” Referring to Tarlós and his alleged dependence on PM Orbán, the song continues “Because they are pulling the strings of the puppet from above the Castle and exchange freedom for hatred.”.

Criticizing Orbán, the refrain states “the people may be the last in the eyes of the king, but Budapest will not be lower Felcsút.” (Felcsút is the village where Viktor Orbán grew up, it has a huge football stadium and a hobby train which were built after he became prime minister in 2010).

During his campaign opener, Karácsony also said that the government would spend about $1,000 billion in Budapest over the next few years on spectacular investments and stadiums. But the mayor has a veto on this, yet Budapest mayor István Tarlós did nothing.  Karácsony said, “there is money here, we should just make sure that it is not spent on the prime minister’s hobbies.”

He also made a personal commitment: “In my city, no new stadium will be built until there is a CT scan in every district.” Gergely Karácsony said in the next 42 days, the goal is to convince everyone that the change is not merely a hope but a realistic chance.

According to Karácsony, change is a matter of life and death: many people die in Budapest due to air pollution while István Tarlós’ capital has diminishing green spaces, with more and more stadiums. He talked among other things, about real estate and rent prices that have broken loose, corruption, and the fact that the opposition could place a common opposition candidate in each district, and brought them to the stage at the end of his speech.

Karácsony is not the first to grab a guitar in the hope of later pulling the strings. Former Prime Minister and Democratic Coalition leader Ferenc Gyurcsány has also hit the strings with the aim to convey the image of a young, dynamic DK.