Budapest cannot go back to the “bad decisions” that led to the current health and economic crises, Gergely Karácsony, the city’s mayor, said on Wednesday, warning that the capital was in need of a “redesign” or risked becoming unlivable.

Addressing the Budapest municipal assembly ahead of the agenda, Karácsony said the capital would be forced to make the necessary changes “under the worst ever financial circumstances”.

“Other governments have also treated Budapest as a cash cow, but the current cabinet wants to send it to the slaughterhouse, too,” the mayor said. He said that for the first time in 30 years, Budapest was a net contributor to the state budget, arguing that the metropolitan council would be the one financing the government instead of the other way around.

Karácsony thanked the city’s residents for their “exemplary” compliance with the epidemiological rules. Budapest did its part and proved that it is a strong city and a strong community, the mayor said. Because the government “did not provide the capital with enough information or support”, it was forced to procure the necessary protective equipment on its own, Karácsony added.

He vowed not to abandon his vision of a livable Budapest despite the fact that he had been forced to freeze 65 billion forints (EUR 184.9m) of funds in the city budget due to cuts made by the government. Karácsony said that without the government’s “brutal austerity measures”, the municipal council “could afford to renovate the Chain Bridge every year”.

Unlike the government, the Budapest administration aims to support individual residents and small businesses, rather than large companies and “monied people”, he said, adding that it also aimed to act on climate change, the housing crisis and the state of the job market.

Karácsony underscored the importance of restoring confidence in the city’s public transport system so that Budapest “doesn’t crumble under its road traffic”. The municipal council will map out a project to connect the tram routes of the Pest side and add new bus lanes, he added.

Zsolt Láng of ruling Fidesz called on Karácsony to end his “political battles” with the government over the renovation of the city’s iconic Chain Bridge and “just get on with the renovation”.

Deputy mayor Kata Tüttő of the Socialist Party said in response that the city leadership will immediately launch a conditional public procurement tender for the project, adding that the city’s public road manager will continue to carry out maintenance work on the bridge until the renovation can go ahead. 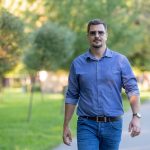