Justice Minister Judit Varga has called for the implementation of a “Christian conservative climate policy”, in an article published by Brussels-based news outlet Politico on Monday.

In the article, Varga said the reason why green parties had been making gains in western Europe was not because they were necessarily more effective in tackling the issue of climate change than conservatives, but rather because they had so far “largely been playing uncontested on an empty field”.

The minister argued, however, that instead of formulating “easily communicable commitments without estimating their societal, economic and civilizational impact and executability, Europe should be focusing on achieving long-lasting results”.

She said multilateral climate treaties like the 2015 Paris accords had only a limited effect on the biggest polluters who “typically fall short of meeting their commitments under such agreements”. Varga said individual states should instead develop their own environmental regulations that take into consideration the needs of the local environment and are adjusted the sustainable development of the country.

To accomplish this Europe must develop a solution to climate change based on policies that do not “force people to bear the burden of change in the long run but takes into account their specific needs and allows them to play a supportive role in the transition,” Varga wrote.

She insisted that “movements in the name of protecting creation” were inspired by Christian ideas and remained strong in rural communities. 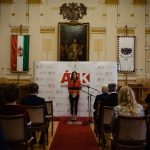