Hungary’s interior minister has until Sept. 30 to take steps to reduce prison overcrowding in the country, Justice Minister Judit Varga said on Tuesday.

Compensation payments made to inmates over prison overcrowding “have led to abuses in the application of the law, which must be stopped”, Varga said during an annual hearing before parliament’s justice committee.

She noted that “as a way of putting victims first”, the government has submitted a bill to parliament that will allow the victims of crimes to seek compensation even after the courts have ruled on their cases.

This is “a quick and temporary fix”, the minister said, but added that she will submit a more complex bill on victim compensation in October. 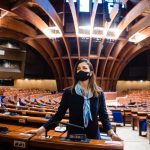