Vaccination against Covid-19 is not a political issue, therefore the Hungarian government has “rejected all politically motivated attacks on effective and safe vaccines”, Justice Minister Judit Varga said on Facebook on Tuesday.

Following a meeting of the EU General Affairs Council in Brussels, Varga said that “when human lives are in danger, we cannot afford the luxury of choosing among vaccines simply on a political basis”.

“We were confident that the key to saving most lives is to do everything we can to make as many vaccines available as possible,” she said.

In another entry, Varga said she had met Didier Reynders, commissioner for justice, and shared with him “concerns about the last Rule of Law Report, which unfoundedly criticised Hungary”. She noted that in April last year the European Commission had pledged to “measure all Member States on an equal standard, including positive developments” in this year’s report.

“We still expect the 2021 Rule of Law Report to be impartial, based on real facts, hence including the Hungarian government’s standpoint too,” she said. 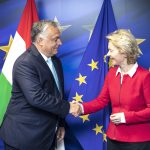