He said it was “a totally ridiculous response” that the committee threw out the initiatives claiming that they were ambiguous.

Such questions could have been clearly answered in a referendum if the “National Election Committee had not been an organisation run by [ruling] Fidesz and if Fidesz had not been afraid of the will of the people,” he said.

“Hungarian employees should be given a chance to decide on their lives, their overtime and how they get paid for it. It is not Fidesz that should decide about these issues on the order of multinational companies,” he said.

The election committee rejected the referendum initiatives concerning mandatory overtime rules and the deadline for payment for overtime work on Friday. It argued that since the initiatives were submitted, the related bill has been amended with a stipulation that all overtime work must be based on a voluntary agreement. 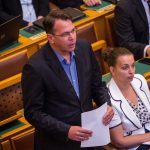