Jobbik: Fidesz is “only Corps Organising Immigration” in Hungary

An MP of opposition party Jobbik believes governing Fidesz is the only “corps organising immigration” in Hungary.

Anita Kőrösi Potocska said at a press conference on Sunday that data from the Central Statistical Office show that 86,000 immigrants arrived in Hungary in 2015-2017. She alleged that most of these entered the country using residency bonds, adding that immigration is “just business” for the government.

Kőrösi Potocska said the government bases its policy on hate and fearmongering, which is why Hungarian citizens – mainly those living outside of the capital – are afraid of immigrants.

Jobbik’s stand is that neither rich nor poor migrants should be allowed into Hungary, she said. The struggle against immigration must be undertaken with the upgrade of border defenses and the establishment of an independent border guard, she added.

She said Jobbik members had approved a declaration at the party congress that the party would continue to fight even in the face of further attacks, similar to the sanctions levied by the State Audit Office. Jobbik is the only viable way out of the situation created under the current government, she added. 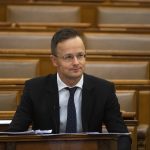