Ethnic Hungarians and Poles held a commemoration in Mirov, in the Czech Republic, to pay tribute to János Esterházy, a leader of Slovakia Hungarians between the two world wars, on Saturday.

The commemoration marking the martyred count’s 120th birth anniversary, was organized by ethnic Hungarian association CSMMSZ and the local authority.

Count Esterházy (1901-1957), the sole Hungarian deputy in the Slovak Parliament before 1945, was a firm advocate of the ethnic Hungarian community, raising his voice against any violation of minority rights and against discrimination.

Czechoslovak authorities arrested him in 1945 under the charge of war crimes, and turned him over to Soviet military authorities. In 1947 he was sentenced to 10 years of forced labor in Moscow and handed a death sentence in absentia in Bratislava on trumped-up charges.

Esterházy (1901-1957) was a firm advocate of the ethnic Hungarian community, raising his voice against any violation of minority rights and against discrimination.Continue reading

Two years later, the Soviet Union extradited the ailing Esterházy to Czechoslovakia, where the president commuted the death sentence to life imprisonment. The count died in a prison in Mirov in March 1957. His ashes were identified in 2007 in Prague’s Motol cemetery. 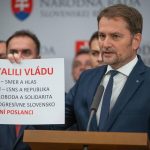