Is Compromise Possible? The Fidesz-EPP Power Play in 3 Chapters 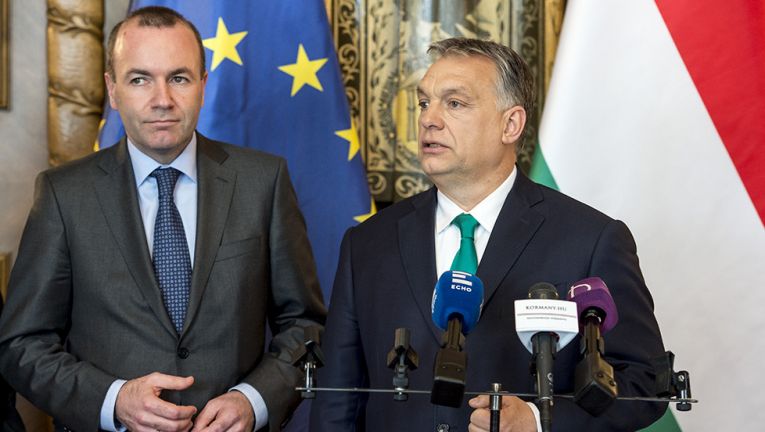 Manfred Weber, the leader of the European People’s Party, discussed in detail the conditions of Fidesz’s continued membership on Tuesday. In response, a spokesperson for Fidesz announced on Wednesday that the party prioritizes protecting European Christian values and putting an end to migration over party discipline.

Manfred Weber explained that the termination of Fidesz’s EPP membership could be avoided if three conditions were met:

He also said he will make one final attempt to keep Orbán and Fidesz in the EPP, “but the values of Christian democracy are non-negotiable.” If the Hungarian government does not comply within one month, Fidesz will be excluded.

We have collected the responses given by various Fidesz politicians in an effort to determine just how likely it is that Fidesz will meet the conditions set by Weber. The European People’s Party is set to discuss the topic on March 20th.

Fidesz members on the ultimatum and leaving EPP

According to government website abouthungary.hu, Fidesz leaders say they have no desire to leave the party and want anti-migration forces to flourish within the EPP.

Concerning the conditions set by Weber, Gergely Gulyás, head of the Prime Minister’s Office, announced at the weekly press conference that consultations had been held with EPP leaders in which the Hungarian government said it would not “compromise on its position of rejecting migration.”

Fidesz spokesperson János Halász said on Tuesday that “this is a big family of parties; each party has its position and Fidesz has its own. We think it is important to preserve European Christian values and maintain security and provide protection for our communities.” He argued that “this is the position Hungarian voters gave us permission to take.”

MEP Tamás Deutsch told Hungarian television channel ATV on Tuesday that Fidesz does not desire to leave the EPP: “One crosses the bridge when one gets there. We have our political family. It is the EPP.”

Hungarian government spokesperson Zoltán Kovács said on Twitter that “the information campaign” would end on 15 March, as had been planned. On Thursday, PMO Head Gergely Gulyás verified that the controversial Juncker-Soros billboards would indeed be replaced. But, contrary to rumors, the Timmermans-Soros billboards will not be the next to hit the streets. Instead, billboards promoting the government’s family policy are set to replace the inflammatory campaign. (However, he dodged questions of whether the government would be nixing the campaign altogether.)

According to Reuters, Weber quickly welcomed the Hungarian government’s announcement: “It is a good signal, taking down the posters there, that was one of the requests I made this week.”

On Monday, the EPP said it had received motions from 13 member parties and would discuss suspending or excluding Fidesz on 20 March.

Hungary defied demands to apologize for its criticism of EU leaders, on Wednesday. Gergely Gulyás revealed the government has begun seeking a compromise to avoid the ejection of its ruling party from the main conservative group in the European Parliament. Manfred Weber told Reuters that “we have made several attempts at bridge building, but Hungary has not taken any steps or effort toward us.” He also stated that Fidesz has not shown any willingness to compromise. Fidesz only has a matter of days to prove its willingness to remain in the group.

Although the Hungarian party has claimed on several occasions that it wishes to stay in the EPP, it declared that “The debate in the EPP is about immigration, and Fidesz is willing to listen to all opinions, including that of Manfred Weber. However, the protection of Europe’s Christian values is more important to Fidesz than the party line. We are not willing to compromise on that.” As of now, an apology from Viktor Orbán is very unlikely, especially since Fidesz sees it as a betrayal of its anti-migration policy.

Several Fidesz politicians, including Hungarian State Secretary for International Communications and Relations Zoltán Kovács, denied that the Central European University (CEU) — which has recently announced the relocation of its US-accredited courses from Budapest to Vienna — had left Budapest. He claimed that the only portion of CEU forced to leave the country was that which breached Hungarian law. Kovács countered by saying that CEU “continue(s) to operate and award degrees in Hungary through its locally registered affiliate, the Közép-európai Egyetem.” He added that “our rules and laws apply to every institution of education in Hungary equally, no exceptions not even for the Soros university.”

According to CEU’s website, the university does have a Hungarian accredited institution that offers degrees in Hungary. Students graduating from one of the “CEU, Budapest” programs do in fact obtain Hungarian degrees. However, most of the courses — particularly those which grant students a US degree — are being relocated to Vienna. According to Gergely Gulyás, the CEU matter is similar to the campaign against Brussels: “what the EPP group leader is asking is an issue resolved and closed.”

The opinion of pro-government organizations and media

According to Politico, Orbán has already begun negotiations with Marine Le Pen’s National Rally in France. If Fidesz were to join Europe of Nations and Freedom, it would be the third biggest party in the group.

Another option is forming an alliance with Poland’s “illiberal” Law and Justice party (PiS), with whom Fidesz is already well acquainted. PMO Head Gergely Gulyás said that “despite disappointment on some issues, Fidesz still views the EPP as the best platform for endorsing a Christian Democratic policy.”

However, PM Orbán announced hours later that Fidesz would “not compromise when it comes to migration and protecting Christian culture.” According to him, the debate with the EPP is nothing more than an “attack of pro-migration forces” against Fidesz. He said that “this dispute might reveal that our place is not within the EPP but outside it.”

Orbán hinted that Fidesz would first negotiate with Poland’s Law and Justice party should it leave the EPP.