International Luminaries Gather in D.C. to Honor the 60th Anniversary of the 1956 Revolution 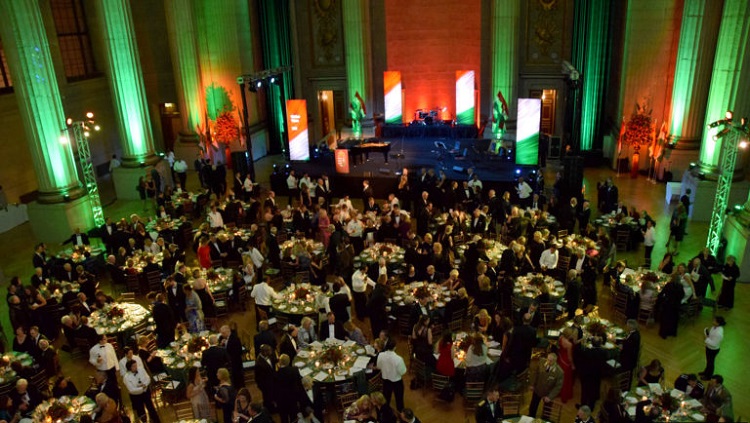 In Washington, D.C. on October 16th, 300 guests gathered in the elegant Andrew W. Mellon Auditorium to celebrate the legacy of the 1956 Hungarian Revolution on the occasion of its 60th anniversary. 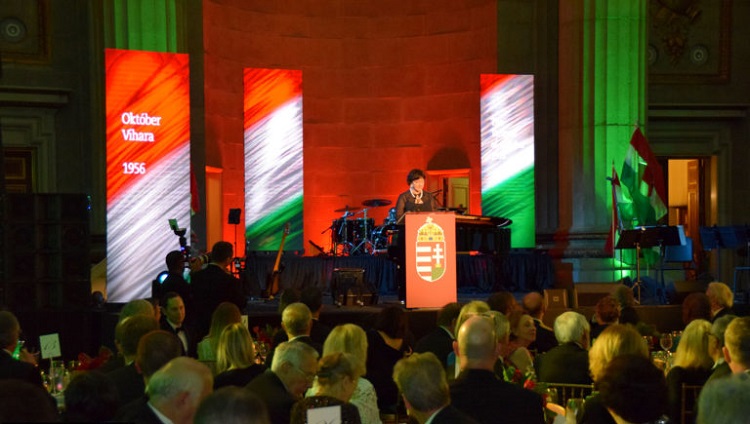 Among the guests were well-known business leaders, celebrities, diplomats, and world leaders, all of whom gathered for a night of fine food and music dedicated to the memory of the Revolution. The Sunday night gala hosted by the Hungarian Ambassador to the United States, Dr. Réka Szemerkényi, was attended by luminaries from throughout America and Hungary, including Mr. Thomas Peterffy, who invented online trading; Peter and Charles Gogolak, former place-kickers for the Washington Redskins and New York Giants; fashion mogul Adrienne Vittadini; and Desmond Child, the Hungarian-American songwriter who penned the official “anthem” written in honor of the 60th anniversary of the Revolution. Also in attendance were Congressman Dennis Ross and Congresswoman Debbie Dingell; U.S. Ambassador to Hungary Colleen Bell; Anette Lantos, Chairman of the Lantos Foundation for Human Rights and Justice; philanthropists Mary V. Mochary and Calvin Cafritz; the ambassadors of more than a dozen countries, and numerous other political, business, and cultural luminaries.

The master of ceremonies for the evening was Ari Fleischer, former White House Press Secretary for President George W. Bush. Fleischer, who is of Hungarian descent himself, reminisced about times as a child when he would sit and listen to his mother and grandmother speak to each other in Hungarian, and recalled with a laugh that these discussions sometimes were about his behavior.

After speeches by Ambassador Szemerkényi and Hungary’s Minister for National Development, Dr. Miklós Szeszták, former New York Governor George Pataki took the stage. In his speech, Mr. Pataki recalled sitting with his father in front of a black-and-white television set, watching the events of the Revolution unfold. Mr. Pataki recalled that watching the “heroes of 1956” struggle for freedom brought great pride to his entire family, and emphasized the importance of these young freedom fighters, saying “Today we honor you.”

And in fact, many of the Gala’s guests had themselves witnessed the Revolution firsthand. Both Dr. Emery Imre Tóth, a member of the 1956 Hungarian Revolutionary Government, and Mr. Steven F. Udvar-Házy, who left Hungary as a refugee following the events of the Revolution, remembered the heroic and bloody sacrifices of the young revolutionaries who dared to face the Red Army head-on. Mr. Udvar-Házy, who created a fortune leasing aircraft, and after whom the Air and Space Museum’s annex at Dulles Airport is named, recalled throwing stones at tanks as a 10-year old child. 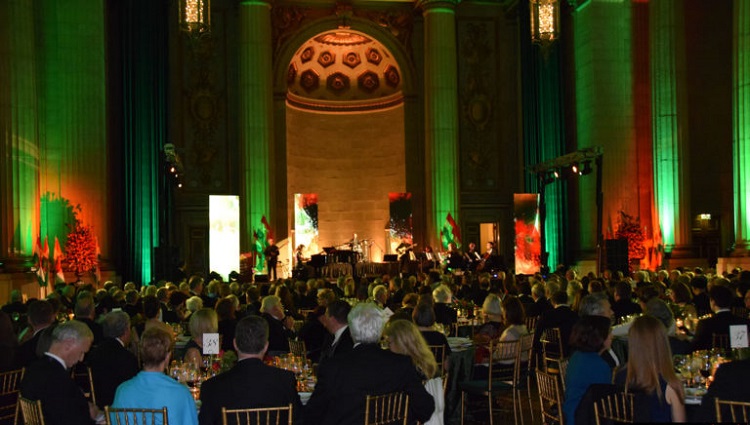 The night ended with a performance of Hungarian composer and concert pianist Csilla Szentpéteri’s concert commissioned to commemorate the Revolution’s 60th anniversary, titled “The October Storms of 1956.” the 10-member orchestra was accompanied by large screens showing historical footage of Revolutionaries marching on the streets of Budapest and fighting Russian Soldiers.

As gala attendees left though the atrium and received their gift baskets, they could view two exhibitions. The first consisted of drawings made by young Hungarian-American children commemorating the 1956 Revolution, while the second included personal items and mementos that had belonged to refugees fleeing Hungary following the Revolution, as well as a projector-screen showing portions of Réka Pigniczky and Andrea Lauer Rice’s series of interviews with Hungarian-Americans, called the Memory Project. 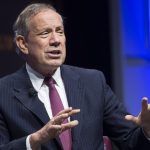