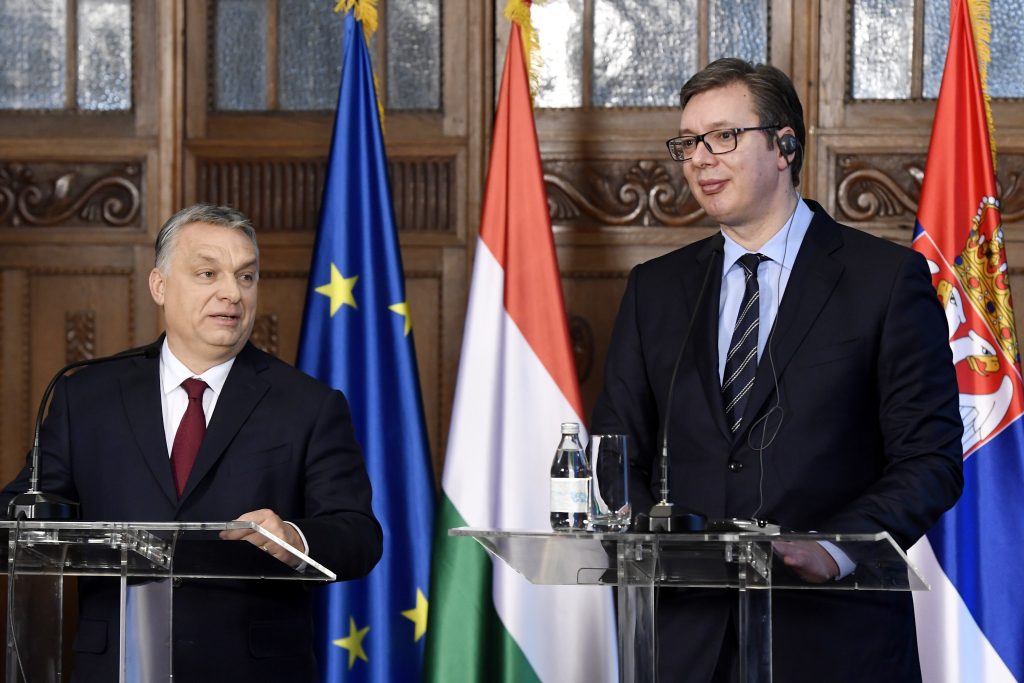 Serbian President Aleksandar Vučić has thanked Prime Minister Viktor Orbán for the Hungarian government’s donation to the costs of renovating Subotica’s (Szabadka) synagogue. During the talks held after the ceremony, the two presidents claimed that the relations between their countries have never been as good as they are today.

In a ceremony reopening the synagogue of Subotica (a town in Serbia’s Vojvodina region, which has a sizeable ethnic Hungarian minority), Vučić thanked Orbán, saying that without his personal support and Hungary’s financial contribution, “Serbia’s most magnificent building” would not have been refurbished. “I am proud that after more than four decades, a new chapter can begin in the life of the synagogue,” he said. Orbán said at the inauguration ceremony:

“It is our moral duty to stand up for a Hungary and Europe in which Jews and Christians can live and practise their faiths without fear.”

He said the inauguration sent the message that “this is the kind of world and the kind of Europe that we want to live in, that we represent, and that we can protect.”

In a thinly-veiled reference to the ongoing refugee-migrant crisis, the Hungarian Premier claimed that, while Europeans today enjoy religious freedom, “if we allow Europe’s cultural subsoil to be changed, then others will write the future instead of us.” He noted that the government had declared 2014 a Holocaust Memorial Year, and launched a programme to renovate synagogues. The government spent 10 billion forints (31,900 euros) on the programme, he said. The prime minister argued that there are “many places” where Jews and Christians face persecution, and where such an inauguration could not take place, adding that there were also places in western Europe where churches and synagogues were being demolished instead of renovated. You can find Orbán’s speech in Hungarian here.

Aleksandar Vučić with Orbán and István Pásztor, leader of the Alliance of Vojvodina Hungarians (VMSZ) at the inauguration in Subotica (Szabadka), Serbia. Photo: Koszticsák Szilárd/MTI.

Serbia Can Count on Hungary

Serbia’s model of minority protection is an example to the whole of Europe, Orbán said in Subotica (Szabadka). At a joint press conference after meeting Aleksandar Vučić, Serbia’s president, Orbán claimed that Serbia had managed to align national pride and a commitment to territorial integrity with autonomy granted to its minorities, while at the same time ensuring and encouraging the functioning of their institutions. Hungary, he said, urges the European Union to consider Serbia as a source of untapped potential capable of boosting the EU’s strengths.

Orbán said Serbia could always count on Hungary to support its EU aspirations. As an EU member, Hungary knows that the bloc needs Serbia, Orbán said, adding that Serbia represented “a great opportunity” rather than a problem for the EU. He said the EU should add more ambitious nations to its ranks. The bloc should expand, grow and become stronger, Orbán said. It should be more active and successful in the Western Balkans, and Serbia is important and a “great asset” to the EU in this respect, he said, adding that Serbia had shown the whole world that its leadership can provide stability.

Serbia’s indicators show that its path to economic progress is laid out before it, PM Orbán claimed. He welcomed Serbia’s progress, saying that its success was also in Hungary’s interest. Aleksandar Vučić said Hungarian-Serbian political and economic relations had reached a pinnacle. No unresolved issues hamper ties, which, he added, could serve as an example to other countries. He argued Orbán’s personal efforts had been vital in elevating bilateral ties to such a high level. He added that Serbia’s policymakers had the same goal in mind, and cooperation between the two countries ensured the well-being of ethnic Hungarians in Serbia.

Vučić said he was “certain” Orbán would remain as Hungary’s prime minister after the country’s general election on April 8. Orbán has demonstrated that he gives priority to the policy of peace and stability, Vučić claimed. The Serbian president noted that Hungary had always supported Serbia during its EU accession talks and had given every possible help to Serbia’s European integration.

“Serbia will always be a sincere and reliable partner of Hungary,”

In modern history, relations between the two countries seem to be at a high point. Serbia’s history and thus relations between Belgrade and Budapest, including the situation of ethnic Hungarians in Serbia, have often been hostile and full of tensions in the past. With Orbán and Vučić in power, however, ties have definitely improved significantly. Orbán views Serbia in general, and Vučić in particular, as a close ally, even though the Serbian PM is reportedly a friend of the often-attacked George Soros‘ son, Alexander Soros, who is himself a vice-president of Soros’s Open Society Foundation. Despite this, before Serbia’s presidential elections, the Hungarian Foreign Minister went on to campaign for Vučić. The Alliance of Vojvodina Hungarians (VMSZ), headed by István Pásztor, is a strong ally of Orbán’s Hungarian government and also a coalition partner of Aleksandar Vučić’s Serbian government, playing an important buffer role between the two sides. Attacks against ethnic Hungarian have gone down drastically since 2013 and Serbia is seemingly not willing to set up any legal obstacles against either Hungarian financial support to ethnic Hungarian, or against dual citizenship. In addition, Hungary is one of the loudest supporters of the European integration of both Serbia and the Balkan region as a whole.