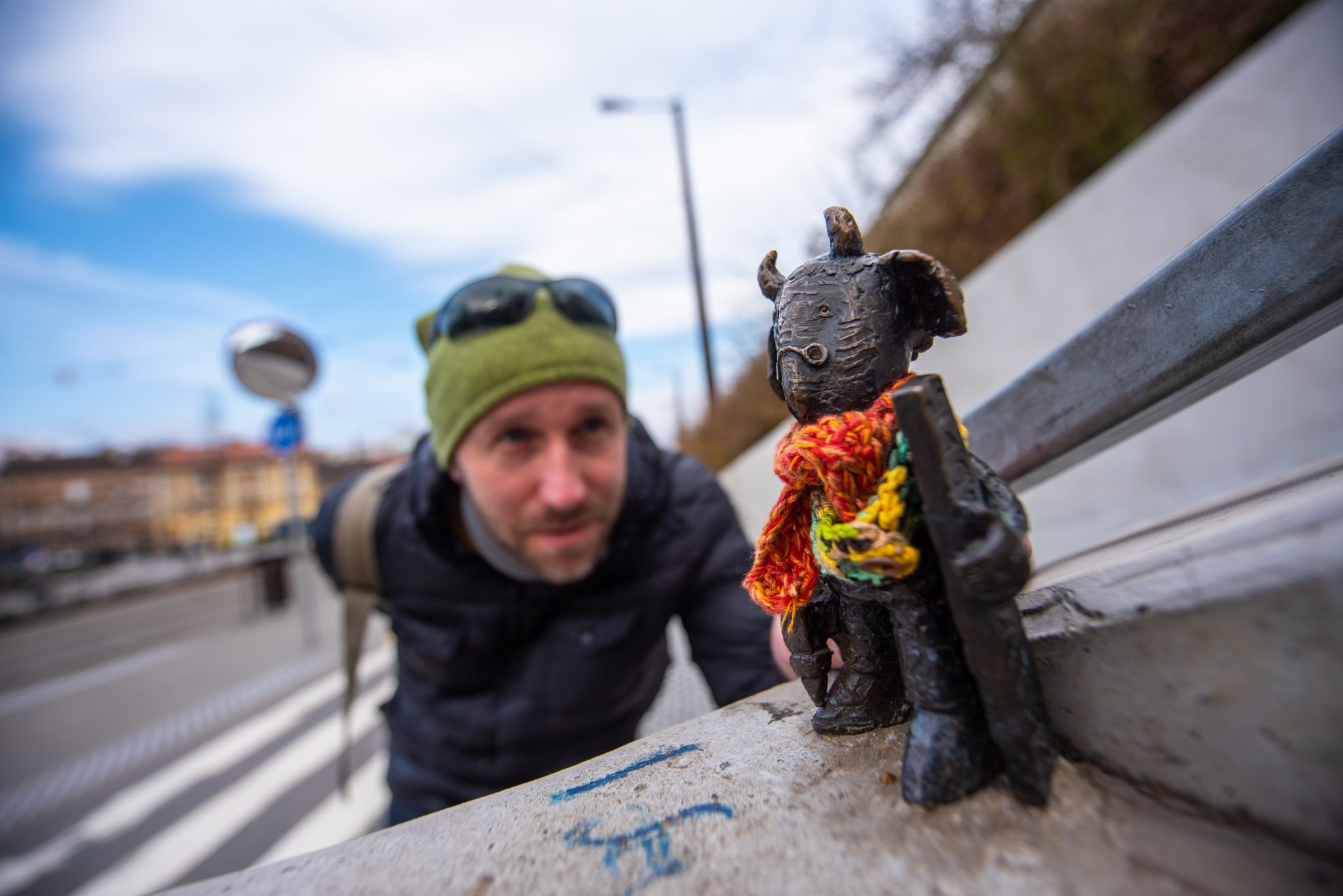 Guerilla-sculptor Mihály Kolodko placed his first miniature bronze statue depicting Főkukac (Boss Worm) from the iconic 1980s Hungarian cartoon, A nagy ho-ho-ho-horgász (The Great Angler), in the Hungarian capital in 2016. Since then, both adults and children have searched high and low for the miniature figures scattered all across Budapest. Hungary Today spoke to the sculptor about his guerilla art, the statuette hunt and the inspiration behind the miniature figures.

We are at your Mekk mester (Master Mekk) statue at Széll Kálmán Square. Were you worried you wouldn’t find it here? I’ve heard that some of your sculptures have been taken home by overly-enthusiastic fans.

That’s true, and this particular statue has been stolen before. It wasn’t even here for a month before it disappeared. It’s always a possibility and actually part of the concept. When I put a statue on the street, I know it may disappear. I usually replace the stolen ones if they’re in a popular location that fans visit and find enjoyable. But, if nobody noticed one’s disappearance, I typically wouldn’t replace it.

This statue, along with the Főkukac, is very popular. Does a statue’s popularity depend on its location? I see that people have dressed him for the cold weather.

Just like with a large statue, I always choose the place first. You can’t plan a statue until you know where it will stand. It always goes together. I thought a lot about where I would put Mekk mester, and chose to place him in the square before realizing that the character’s creator, Iván Koós, lived there. It’s a complete coincidence because having him hold the Moszkva Square board was already part of the concept during the design phase. I worked on it for half a year and everything I chose to put on the statue was deliberate. I wanted a tool to show he’s living in our time, so I put a cordless drill in his hand. The board was another important detail because the Moszkva Square was where the Ukrainian workers — including my fellow Transcarpathians — looked for work in the mornings when first coming to Hungary. It was an open secret; I wanted a memento of it. 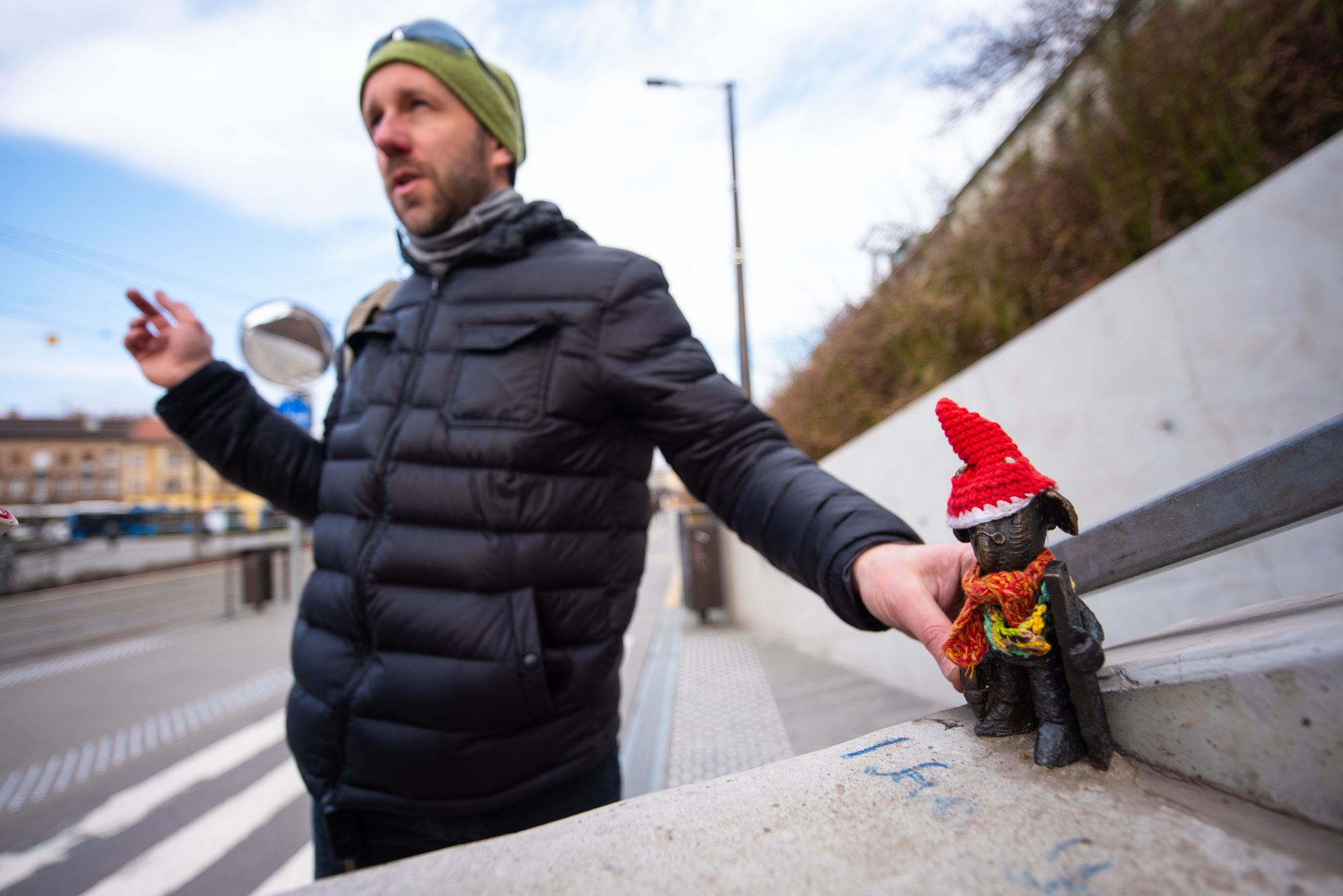 If I’m correct, Főkukac was your first statue in Budapest. Why did you choose for this figure to be first?

Of the so-called guerrilla statues, Főkukac was indeed the first. But my first job in the capital was Harry Houdini’s mini statue, which I gave to the seventh district, as he was born there. We discussed its placement through interpreters and somehow the essence of my concept got lost. They didn’t understand that I wanted the statue to be in a public space, so, like most statuettes, it was placed inside a gallery. But I intended for it to be outdoors, as it has a completely different impact that way. These aren’t just tiny, funny figures; I put a lot of thought into them, just as I do with bigger statues. When I finally moved to Budapest, Főkukac was my first choice because it reminds me of my childhood and means something to me and the people living in Budapest. But, for example, the Főkukac in Ungvár was stolen and I didn’t replace it because they didn’t miss it.

How so? Not even the Hungarians?

Not many people watched Hungarian television and now there are just a few Hungarians who know Főkukac. Nowadays, not even children are familiar with the cartoon. My children are not interested in it either; it has a different rhythm than what interests kids today. That’s why I’ve shaped so many characters from these iconic Hungarian cartoons: to show them to my children so their memory can survive somehow. My kids come with me when I choose the figurines’ spots and now when they see them on TV, they know they have a whole story and, better yet, they feel like they’re a part of it.

Do you regularly visit the sculptures to see if they’re alright?

I put almost every sculpture in a place I can see when I drive by in my car. I don’t even have to stop; I can see them from the window. Even today, I saw that someone put a little cap on the Mekk mester.

How do you choose the model of your statues?

I always choose a figure I like, through which I can say something to the people. Many times, I’ve been asked to do a statue for order: figures from fairy tales, cartoons or of famous people. But if there’s no story behind it, it’s not really my thing. For example, the squirrel I placed behind the statue of Lieutenant Colombo was meant to show a little bit more of the detective’s character. That’s how the idea came: a squirrel, who – we don’t know how and why – has committed suicide. But luckily, Colombo is right next to him to find out.

Do you usually make more than one copy of a statue?

Yes. Sometimes if something is going wrong when I’m casting, or I don’t like a part of it, I will fix it when making the next copy. So if a statue is stolen, there is usually another I can put in its place. For example, I gave a copy of Mekk mester to Iván Koós’ family and a Főkukac replica to its creator, Ferenc Sajdik. I would also like to gift a Kockásfülű nyúl (The rabbit with checkered ears) to Veronika Marék, who dreamt the character. Interestingly, she also lives close to where the statue stands.

Are there any people who don’t like your work?

Of course. Once, during an interview next to the squirrel, the interviewer asked an antiquarian if he likes the statue. The man said, “No, it’s horrible! What is this even supposed to be?” He was holding a Zsolnay plate in his hand at the time, something he thought was special. Meanwhile, he didn’t understand my art. But this isn’t a problem. I find it funny; everyone sees value in different things.

Are you planning to place sculptures in other cities as well? Or will Budapest remain your only workspace?

I make sculptures for the city I live in; it’s where I think, where I roam… Since moving to Hungary, I’ve wanted to communicate with the people living here. Not with words — I don’t have an impressive vocabulary — but with my sculptures. I not only put my time but also my thoughts and feelings into my sculptures. Just like with poets. Every poet uses words, but every poem is different. I wouldn’t be able to make small sculptures for order or in a place I didn’t know well.

Wasn’t the tiny Ferenc Liszt at the airport made for order? I remember there being an official unveiling there.

No, I thought of it myself. However, the placement itself was complicated. It took a long time to find a solution and lacked the most interesting factor, people being able to find my statues randomly. My aim was to give people a task and send them on a quest for the tiny Liszt Ferenc in the big airport. He was meant to sit in a secluded part of the building, but in the end, they placed him on a column, essentially undermining my idea. 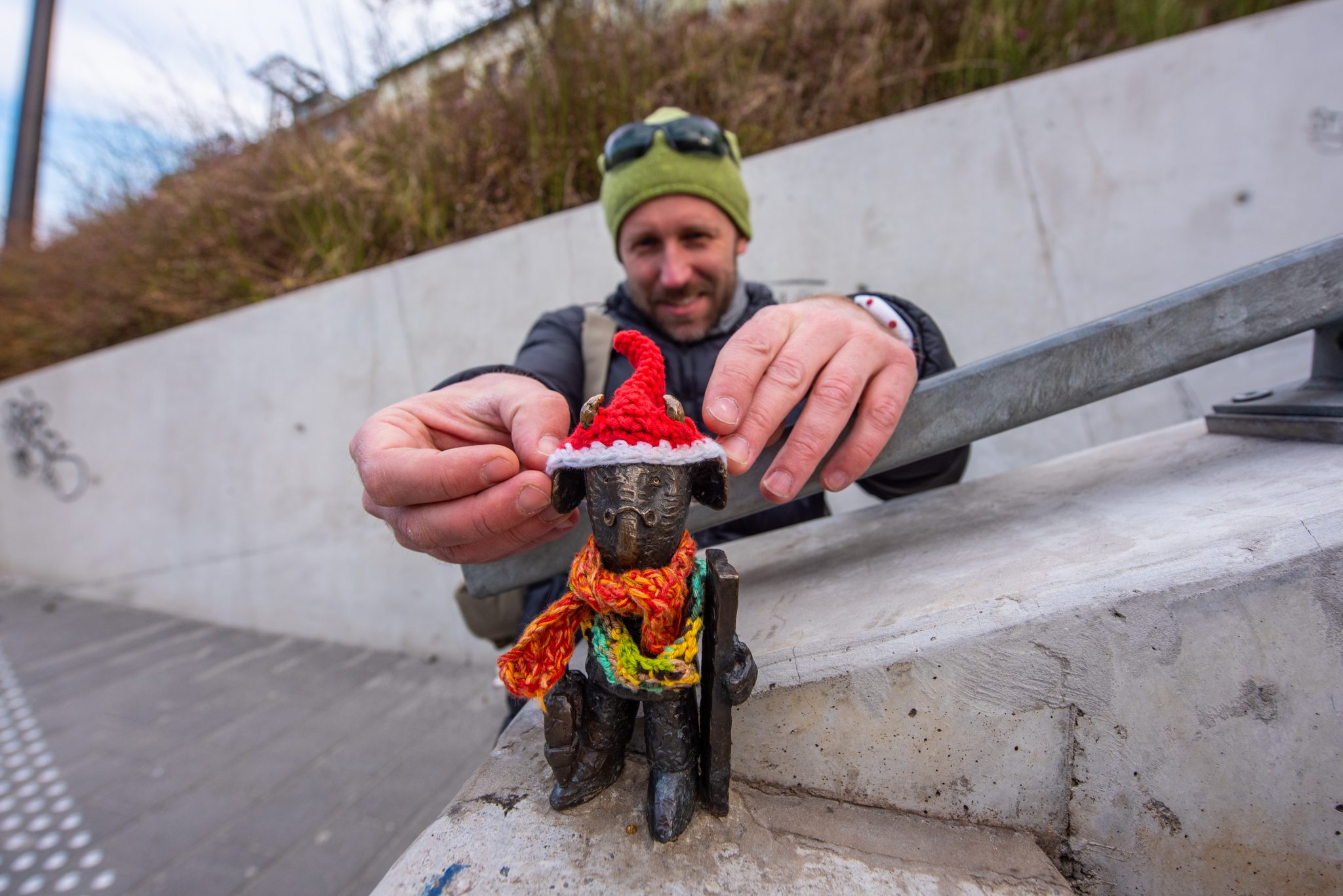 People really do like to search for your sculptures. I’m always seeing people talk about your work on social media. Are there any that haven’t been found yet?

Currently, all have been discovered. I think the tiny urinal is the hardest to find, even when you know where to look. Once, someone couldn’t find it and told me it was stolen. When I got there, I saw that the statue hadn’t been moved. They had looked for it a few meters away. Sometimes I wonder if I’ve hidden some of the statues too well. But, in the end, it’s part of the game. If you’re clever, you’ll find them.

When you put out your first sculpture, you tried to hide the fact that you created them.

For some reason, I didn’t want to let people know who made the sculptures. In fact, interviews, for example, take away from time that could be spent creatively. The readers may find it easier to understand the sculptures or get to know me, but I would’ve preferred that it remained a secret. But I learned to let go of that. When I first started to place the sculptures, I had to work hard to keep my identity a secret. For example, I used a pseudonym when I made Főkukac, but someone connected it to the one in Ungvár so they discovered it was me.

Recently, there was an exhibition of the statuettes in Vác. Are they as interesting indoors as outdoors?

My first exhibition was in Budapest a few years ago and many people were curious about it, perhaps because it was the first one. I don’t know how many people have looked at them in Vác. I didn’t really want to showcase my work inside a museum. It feels a bit strange; I feel like they are back in the workroom. Also, I didn’t intend for Bartók to sit a meter or so away from Liszt or Mozart. I wanted them to be hidden in the city, with at least one kilometer between them. This way people can play, explore and enjoy the task. The site also helps the observer understand why the figure sits how it does. These sculptures need a much larger space than a gallery to work how I dreamed them to. 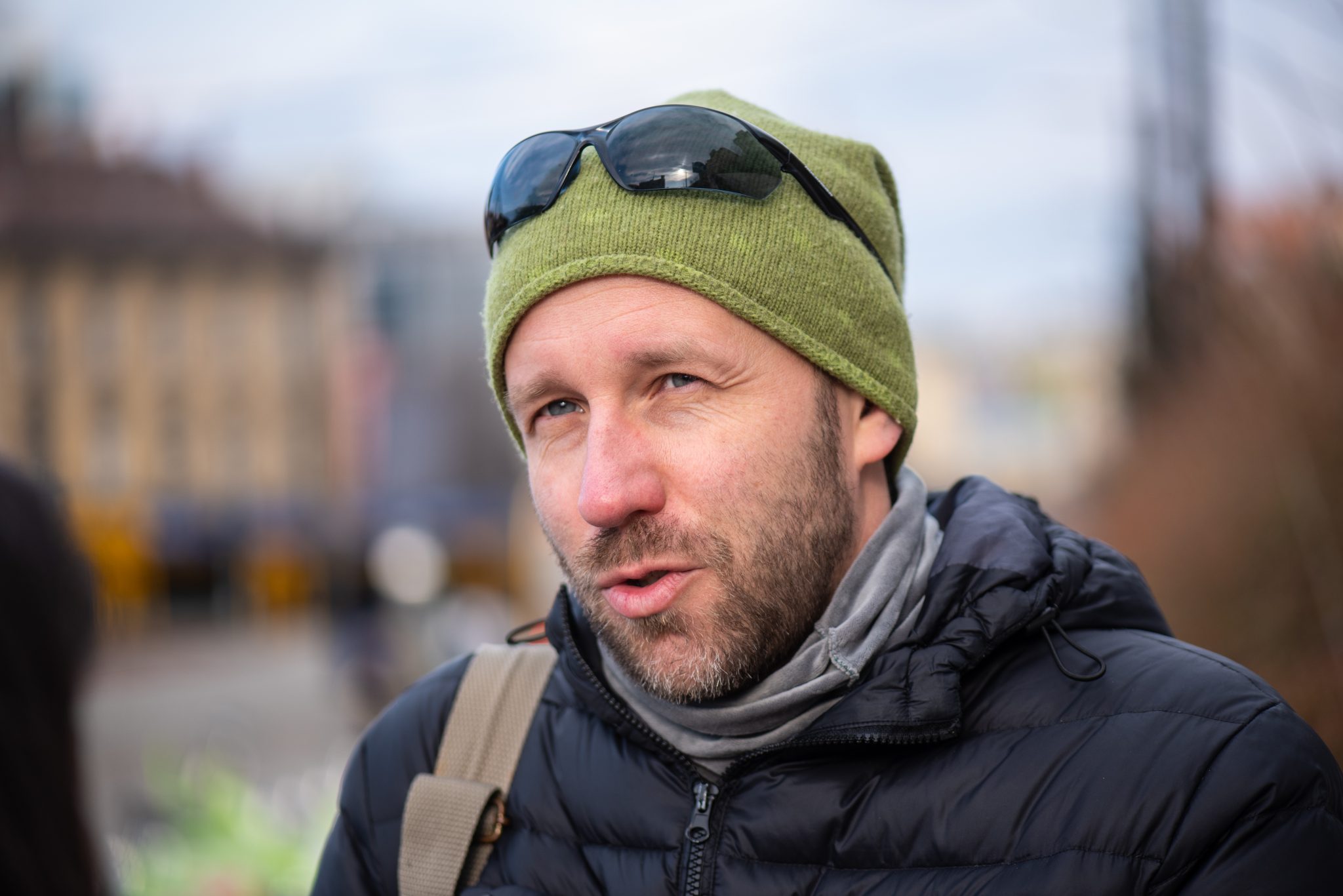 There are some plans and sculptures that I have asked permission for. However, there are places I look at and feel it would be foolish to ask a license for. For example, where the Kockásfülű nyúl stands today, the wall was lacking a stone and there was at least a meter-wide gap there. I put the statue in the place of the missing stone. I figured if they didn’t like the statue, they could just take it out and replace it with a stone. It was a suggestion, or provocation, to do something about the hole.

You make large sculptures as well, not just statuettes. Which is closer to your heart? What would you like to be remembered by?

I always imagine my small sculptures big at first…but how would a three-meter tall Mekk mester look in the middle of the city? The smaller ones are closer to my heart because they’re my life. The mini statues give me more freedom because I can make them alone, without order. They’re also cheaper, so I can make a lot of them. Ten pieces fit perfectly into a suitcase and I’m not tied to the workshop. I can even work on them while sitting in the car. A big sculpture could never provide the same kind of freedom.