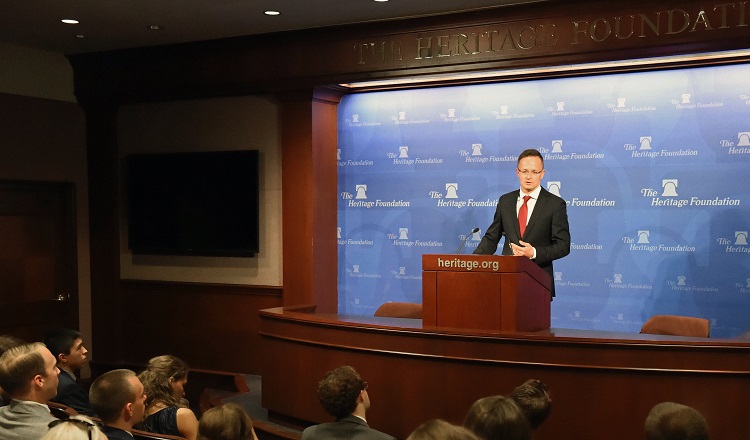 Hungary welcomed US President Donald Trump’s non-interventionist policy which is based on mutual respect, Hungary’s Minister of Foreign Affairs and Trade stressed in his speech delivered at the Washington conservative Heritage Foundation on Friday.

In his lecture regarding the new challenges Europe is facing and the new era of Hungarian-US relations, Péter Szijjártó spoke in detail about the state of the European Union and Hungarian politics, and in answer to questions, he also spoke about the attempted interventions of the former US Administration and the migrant policy of the Hungarian Government. In the context of Europe, the Minister stressed that the EU is facing five major historical challenges: the threat of terrorism, the problem of migration, the war in Ukraine, issues related to energy security and Brexit, the departure of the United Kingdom from the EU.

In the context of the flow of migration as one of Europe’s great problems, he said: Europe was wrong in the way it treated the migrant problem. He argued: Hungary never claimed that illegal migrants are terrorists, but it takes the view that with a large influx of migrants, there is a chance that, along with the migrants, members of terrorist groups, too, may gain access to Europe. The European Union needs a rational debate on the issue of migration, the Hungarian minister said.

“The question is which way we should be heading now”, he said. He added: all EU Member States agree that we need a strong Europe; the debate is about how this could be achieved. He pointed out: according to the position of the Hungarian Government, a Europe of strong nation states makes the European Union strong. Szijjártó took the view that the relations of the EU, Hungary and the United States with Russia should be characterised by a reasonable debate. Hungary has a primary interest in ensuring that US-Russian relations should be more balanced than they are at present, he stated. He stressed: “History teaches us that whenever any conflict evolved between East and West, Central-Europe found itself on the receiving end”. The Minister highlighted: “When we root for the US President’s efforts to improve relations with Russia, we don’t do so because we’re pro-Russian or pro-American, but simply because we’re pro-Hungarian …, we must protect the security of the Hungarian people”.

Concerning energy security, he said: Hungary, too, would be happy to diversify its energy sources and would buy American liquefied natural gas (LNG), but Poland alone has the infrastructure that is necessary for receiving it. He remarked: Europe purchased more gas from the Russian Gazprom last year than at any time before, and for instance, Germany, too, concluded gas supply agreements with Moscow in magnitudes greater than ever before. Szijjártó referred to the fact that when he attended an international business forum in Saint Petersburg this spring, more of the attendees spoke German than Russian. The Minister said: it is unacceptable that when a country is big and rich, it is seen as a “super hero” if it negotiates with Russia, while small countries with weaker economies are branded due to their talks with Moscow. “We’re never going to accept this”, Szijjártó insisted.

Regarding Hungarian-US relations, he highlighted: Hungary welcomed the US President’s opinion to the effect that “bilateral relations must be based on mutual respect, not on teaching one another lessons”. In answer to a question, he mentioned as a former attempt at intervention that when at the time of the former US Administration led by Barack Obama he paid a visit to the Deputy Secretary of the Department of State, he was presented with a list, saying that there is a chance of improving political relations only if the Hungarian Government meets the expectations listed. The list featured, among others, the transformation of the Constitution and the alteration of the laws regulating churches. 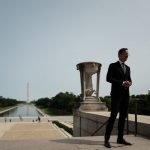 FM Szijjártó: Biden’s Comments on Hungary ‘Have Nothing to Do with Reality’