According to Variety, “this intense, intimate debut film shows 36 hours in a disintegrating marriage from the point of view of the stressed-out wife.” The 99-minute film follows Anna, played by Zsófia Szamosi, who also starred in Kristóf Deák’s Oscar-winning short Sing, to get a sense of her tiring daily routine with her family: her three kids and her lawyer husband, Szabolcs (Leó Füredi), who may be having an affair with Anna’s friend, Gabi.

The drama is a backstory: somebody cheats on somebody. It’s quite banal, I guess everyone has their stories about that. But I don’t think it’s banal when your trust and faith, built on ten years of marriage, break down. It wasn’t easy, as we had to find a balance between keeping the backstory in the background and avoiding that it disappears altogether. There is always a phone call or a reed on a balcony that reminds us of it. I wanted to keep track of that, and this is the frame of the film.

The film competed for the Golden Camera for the best first film against six other feature films and nine short films last week. The Critics’ Week event was presided over by Norwegian director and writer Joachim Trier.

According to the Hollywood Reporter,

Shot in a handheld style and with a soundscape that doesn’t stop assaulting the senses — from crying kids to car alarms to spinning washing machines and dozens of other noises — the film does a great job of creating a fully immersive experience that really offers a window into the protagonist’s exhausting daily life.

The film is planned to premier in Hungary in the autumn. You can watch the trailer of One Day here: 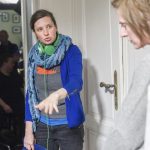