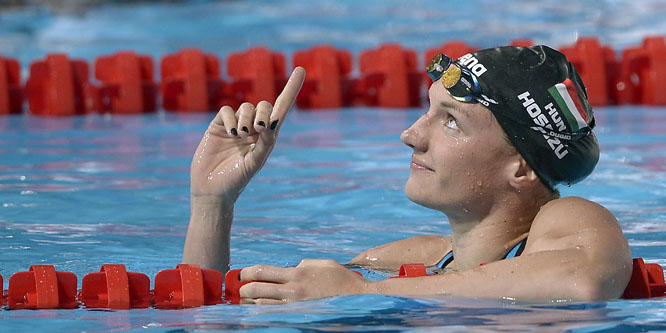 In a spectacular ceremony held at the Ceasar’s Hotel in Windsor in Canada, International Swimming Federation (FINA) paid its annual tribute to the best athletes of 2016 during its FINA/Alisports World Aquatics Gala – “Soirée des Etoiles”. In female swimming, Hungary’s Katinka Hosszú was named the best of the year, after her outstanding results in the 2016 Olympic Games.

Köszönöm a FINA 2016 Év Legjobb Női Úszója díjat! És még nincs is vége az évnek 😉 köszönöm a rengeteg támogatást itt, az oldalamon, Tőletek, visztek előre! #HWAPO #IronNation #IronLady What an honor to receive the FINA 2016 Best Female Swimmer of the Year award! And the year isn’t over yet 😉 thank you for all your support here, on my page, from You, you make me want to get better!

Commenting on the prize she has received now for the third consecutive time, the Hungarian swimming icon said: “First of all I want to say thank you to my grandfather, who told me when I was four that once I would be Olympic champion. He needed to wait a bit, 23 years, to see if he was right. And of course I would like to say thank you to my husband and coach, Shane, who has shown me the way and made it possible for my grandfather’s prophecy to come true.

Starting on Tuesday, the Canadian city of Windsor will host the 13th edition of the FINA World Swimming Championships (25m). From Hungary fifteen swimmers will compete for for World Championship glory, including Rio2016 stars Katinka Hosszú, Boglárka Kapás and Zsuzsanna Jakabos.

via swimswam.com and MTI