Hungary chose precisely one week ago to relax the national restrictions imposed to curb the Covid-19 epidemic. According to the latest data, active coronavirus cases have been slowly declining in the country ever since so there seems to be no reason to reintroduce the restrictions. However, as too little time may have elapsed, it is hard to tell if Hungary is over the peak of the virus for good.

As countries have begun loosening restrictions across Europe, some fear this will lead to a surge in the number of Covid-19 cases. Some news reports seem to confirm these concerns.

Germany’s coronavirus spread appears to be picking up speed just a few days after federal states announced the relaxation of social restrictions, Reuters reported on Sunday.

Official data published by the Robert Koch Institute for Public Health, shows that Germany’s reproduction rate (R0) had climbed from a recent 0.65 to 1.1, meaning 10 people with COVID-19 infect on average 11 others.

The RKI cautioned it was too soon to draw conclusions, but said the number of new infections “would need to be watched very closely in the coming days.”

In Hungary, the increase in the number of registered cases has been slowly declining since the end of April, and according to the government, all thanks to the previously introduced measures and the discipline of Hungarian people, the country has managed to flatten the curve of the epidemic.

Hence, last Monday the gradual loosening of lockdown measures has started in the country. Due to the relatively high infection and death rate compared to other parts of Hungary, the previous curfew restrictions remained in force in Budapest and Pest County while outside of those areas, the terraces of restaurants, hotels, and cafes were allowed to re-open as of May 4th, as were beaches and open-air museums.

Services are no longer restricted and sports training sessions and indoor events can also be held. The government is also planning to discuss easing restrictions in Pest County on Wednesday.

It has been exactly one week since the restrictions were lifted, so the question pops up: has the number of people infected risen in Hungary in the last week?

According to the most recent official data, the number of registered coronavirus cases in Hungary is 3,284; one week ago this number was 3,035. But this data counts everyone ever registered with a Covid-19 infection in Hungary — even those who since have recovered or are deceased.

The disease has been detected in 21 people in the last 24 hours. This is the lowest number in more than a month – the last time a lower number of cases was identified (11) was on April 6th. 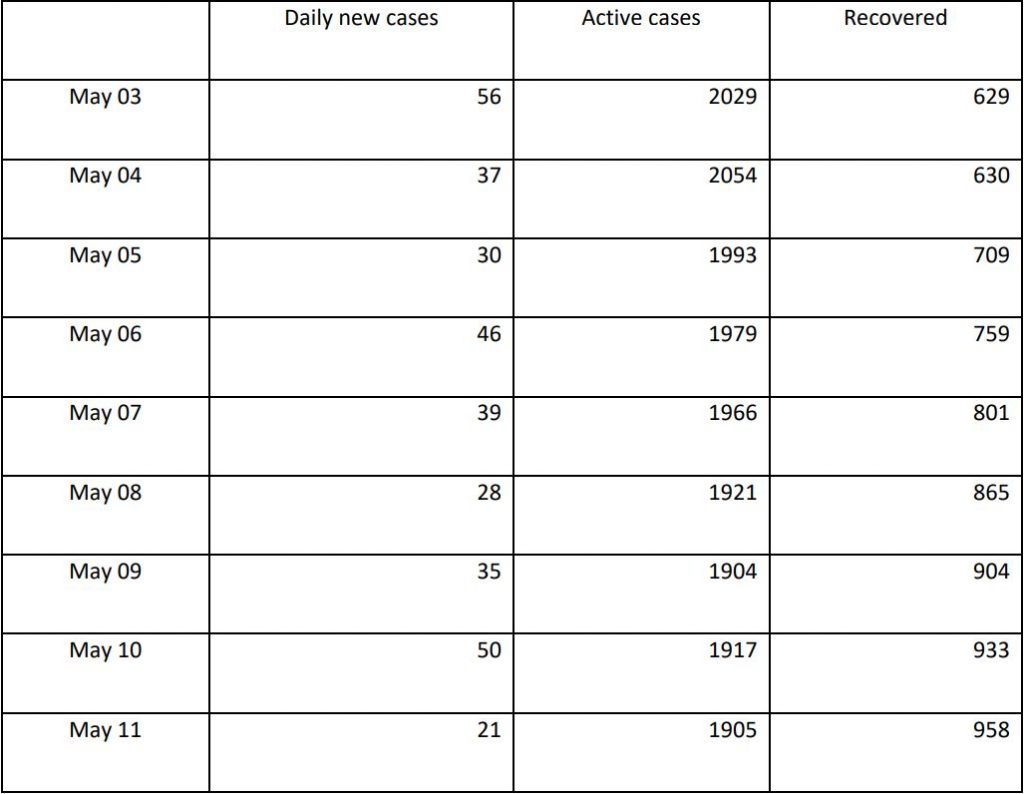 If we take a look at the number of active cases, which gives a more accurate picture of the situation, we can further see that the indicator has been steadily declining since Tuesday (except for a small spike on Sunday), which could again be a rather positive sign of the progression of the epidemic.

Thankfully, the number of recovered patients has also been gradually increasing.

Of course, it should also be noted that there may be a completely different reason for the decline, and only one week’s data is likely not enough to draw far-reaching conclusions. Moreover, experts say the incubation period for COVID-19 is on average 5-6 days, however, it can be up to 14 days, so the surge in the number of cases might just be yet to come.