The film tells the story of an albino teenager, Kató, living in a children’s home in the Romanian town of Déva, and her exceptional bond with one of the volunteers there. As she learns that her friend is about to leave, Kató decides to sacrifice another volunteer to keep her.

At the Cottbus festival, focusing on central and eastern European films, Déva won the Dialog award for the promotion of intercultural understanding. 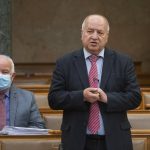