The Economy Ministry noted that the deficit rose from just 713.7 billion forints in the base period and attributed the difference to “disparate developments” related to European Union funding. The ministry said that as of now, the government had transferred 500 billion forints more in payments compared to the base year “in the interest of ensuring the implementation of domestic developments and avoiding a possible loss of resources”.

The full-year ESA deficit goal, calculated according to EU methodology, is an unchanged 2.4% of GDP, which could still realistically be met, and the actual deficit could be even below the target, the ministry said. Eleven-month central budget revenues, at 10,242 billion forints, stood at 92.9% of the full-year target, over the pro-rata 91.7%, while the ratio was 95.1% for budget expenditures which came to 11,281 billion forints. 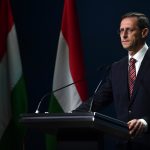