In Hungary, a Vestige of Analogue Age Comes to an End

Telegram service has been discontinued in a number of European countries, including Austria, the Czech Republic, Germany, the Netherlands, France and Slovenia, it added. 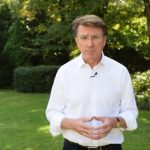