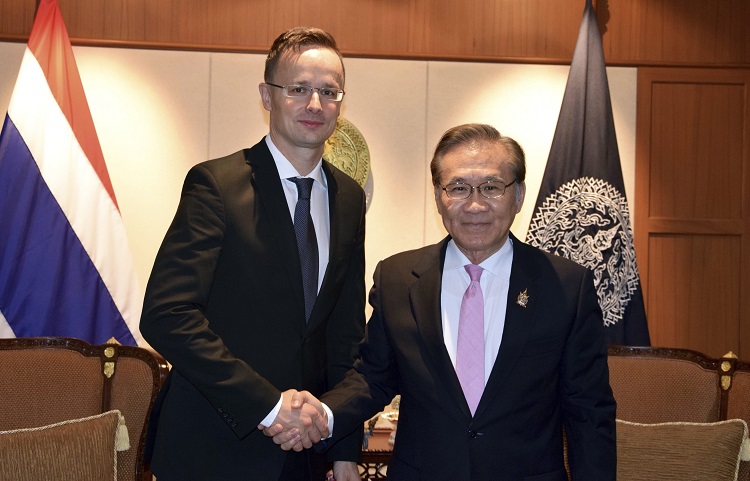 According to the agreement with Thai authorities, Mahachulalongkornrajavidyalaya University (MCU) can continue its operation in Hungary. The university is co-operating with the Gate of Dharma Buddhist College.

Szijjártó added that the Thai government and the institution is prepared to “fully comply with the new Hungarian higher education prescriptions”, known popularly as “Lex CEU”, adding that the agreement also provides 40 scholarships per year for Thai students to study in Hungary, from next September.

The Foreign Minister’s comments about ‘full compliance’ were a clear reference to the Central European University, CEU. The “Lex CEU amendments” require each foreign-based university operating in Hungary to have an ‘intergovernmental’ agreement between their country of origin and Hungary, as well as a campus in the country in which they are based.

Recently, the government extended the deadlines for complying with the new legislation by one year, a move criticized by CEU, which argued that this was an excuse to prolong the state of uncertainty over the university’s future. CEU also called on the government to sign an agreement already negotiated with the state of New York, in order to bring a “speedy conclusion to this affair.”

Speaking from the East Asian country, Hungary’s Foreign Minister also said that Thai authorities have lifted an import ban against Hungary which was originally put in place in connection with avian influenza (bird flu). This means that goose and duck liver, poultry and egg exports to South-East Asia can now be resumed.  Szijjártó claimed that, with the widening of the Thai middle class, there is a higher interest in the quality products of the Hungarian market.

Thailand also plays a major role in the construction of the petrochemical plant of Hungarian oil and gas company MOL in Tiszaújváros, as most of the necessary modules will be produced there. The two billion US dollar investment will be central Europe’s largest petrochemical plant and the fifth biggest in Europe, Szijjártó said.

The Fidesz politician urged the European Union and Thailand to restart free-trade talks and to forge a partnership and cooperation agreement. He also highlighted that an agreement between Thailand and the EU would create new possibilities for Hungarian exports as well.

The foreign minister will visit Myanmar from 19 to 21 November and attend the Asia-Europe Summit (ASEM) Foreign Affairs Summit.