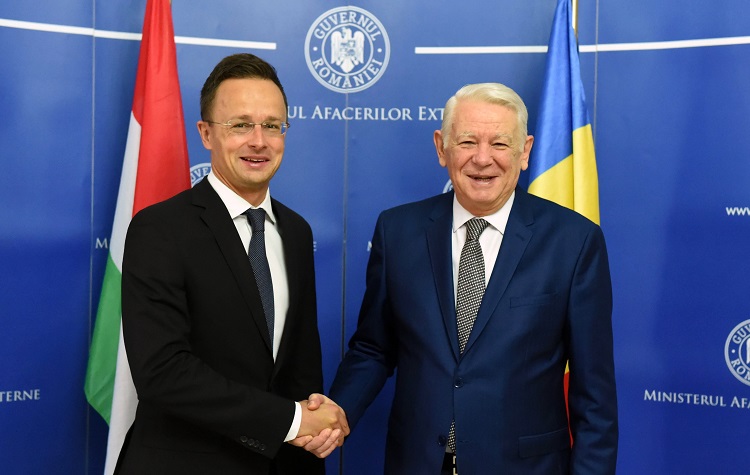 Hungarian Foreign Minister Péter Szijjartó on Wednesday visited Bucharest at the invitation of his Romanian counterpart Teodor Melescanu. It was agreed that a Hungarian cultural institute would be opened in Kolozsvár (Cluj, RO) and that opening times for two Hungary-Romania border-crossing stations would be round the clock rather than daytime only.

The Hungarian foreign minister had talks not only with Melescanu, but also with Deputy PM Marcel Ciolanu and Hunor Kelemen, head of the ethnic Hungarian RMDSZ party. At the meeting with Melescanu, the Romanian foreign minister suggested an evaluation of the First World War by experts of Romania, Hungary, Slovakia and Austria. At a joint press conference after the meeting, Melescanu argued that the WWI had a decisive impact on the region’s future, and suggested an “open” debate to determine “the role and place of those countries in central Europe, in the European Union and the world”.

Péter Szijjartó told news agency MTI afterwards that Hungary-Romania business ties were a “success story” which would help to boost ties in other areas. He said that in 2016 Hungary’s exports to Romania had totalled 4.6 billion euros, making Romania Hungary’s second largest export destination. He added that the turnover of exports has further increased by 16 percent in the first five months of 2017. Concerning energy cooperation, Szijjartó said that Romania had started development projects which will enable Hungary to buy an annual 1.75 billion cubic metres of natural gas from Romania by the end of 2019, with a view of increasing the amount to an annual 4.4 billion cubic metres by end-2022.

Support for Hungarian businesses in Transylvania

The Hungarian Minister called it the “best news” of his day in Romania that his negotiating partners had reacted positively to the Hungarian government’s plan to launch a programme in Romania, similarly to northern Serbia (Vojvodina) and western Ukraine (Transcarpathia), to promote local, ethnic Hungarian businesses. “The Romanian government’s attitude is absolutely positive”, he said, adding that only minor details had remained to be clarified before the scheme is “harmonised within the legal systems of Hungary, Romania and the EU.”

via hungarymatters.hu and MTI; photo: kormany.hu