Hungarian oil and gas company MOL has refilled the Hungarian oil reserves which were used when contaminated oil was delivered through the Druzhba (Friendship) pipeline last April, leftist daily Népszava cited the company as saying.

A number of refineries in Europe suspended oil imports via the Druzhba pipeline on April 19 after it was found to contain high levels of organic chloride, a material used to boost oil output which must be separated before shipment as it can destroy refining equipment.

MOL then used 246,000 tonnes of oil from the national reserves as well as resources delivered from the Adriatic region. 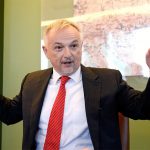