Yesterday, Hungary Today’s sister-site, the German-language Ungarn Heute, conducted an exclusive interview with Ambassador Tacan Ildem, the North Atlantic Treaty Organization (NATO)’s Assistant Secretary General for Public Diplomacy, at a conference celebrating the 25th anniversary of the Hungarian Atlantic Council; we have translated this interview for our readers, and you can find the original at Ungarn Heute’s website.

Tacan Ildem is a senior Turkish diplomat and public servant who has served as NATO Assistant Secretary General for Public Diplomacy since March of last year; in this role, he “advises the Secretary General on public diplomacy issues and directs the Public Diplomacy Division (PDD), which plays a key role in conveying the Alliance’s strategic and political messages to opinion formers and to the public in general.”  Prior to his appointment, Ambassador Ildem served as Turkey’s Permanent Representative to the OSCE (Organization for Security and Cooperation in Europe) from 2011 to 2016. Since the beginning of his diplomatic career in 1978, he has held a number of important diplomatic, advisory, and ambassadorial posts, both with Turkey and with NATO.

This interview has been edited for concision and clarity. 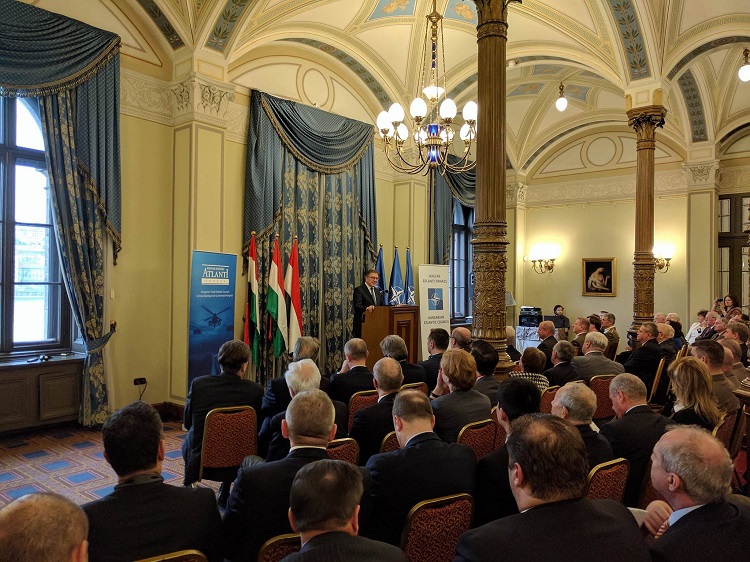 Tacan Ildem, NATO’s Assistant Secretary General for Public Diplomacy, giving a speech at a conference at the Hungarian Academy of Sciences celebrating the 25th anniversary of the Hungarian Atlantic Council

What did NATO’s fourth round of enlargement, when Hungary, Poland, and the Czech Republic joined the alliance, add to NATO?  What role has Hungary played in NATO’s defense programs?

First of all, I have to emphasize that NATO’s open door policy is a very important instrument to bring aspiration and willingness to new countries to contribute to NATO’s endeavors, sharing the same values and making contributions for the security and defense of the North Atlantic area. And I think with each wave of NATO enlargement, we have seen the tangible results of this process. Therefore, it is a very unique and very important instrument in the hand of NATO. The accession of these three countries – Hungary, Poland, and the Czech Republic – made NATO stronger. Today at the conference, we heard statements emphasizing the important contributions that Hungary has been making. From Afghanistan, to contributions to KFOR (Kosovo Force) in a wide range of operations and missions, to activities like air policing. And this is something very valuable and fundamental. But the most important thing is – as speakers were referring to this in their statements –  that NATO is a community of values; we share the same ideals – democratic values, individual liberties, and rule of law. And accession of new countries in Europe adds to our strength, because the strength of the democratic community of countries means a lot.

How do you feel about the EU’s recent moves to expand defense cooperation, a move that some have interpreted as moving toward an “EU army”? Do you think it might undermine NATO?

It is important to note that we are not talking about an EU army, but rather about certain planning activities to be conducted by a group of staff officers, particularly to plan EU missions in different parts of the globe. What I can say is this: a strong EU does not mean that it will come at the expense of NATO. There is a clear understanding between the two organizations about the complementarity of the efforts of the two organizations. We are in a very complex security environment with different challenges occurring simultaneously; both of our organizations face these challenges, and so we need to support each other. Each organization has its distinct strengths, and if we combine these strengths in a complementary manner, while upholding the principle of avoiding duplication, then it will be good for NATO and good for the EU. We should not approach it strictly on the basis of competition. I think we should be more focused on the word “complementarity”.

How do you feel about the Hungarian Prime Minister’s overtures toward Vladimir Putin’s Russia? Do you think that the strengthening of political and economic relations between Hungary and Russia poses a danger [to NATO]?

First of all, I have to emphasize that it is not my place to comment on the individual choices, policy preferences and priorities of sovereign nations. The important thing to keep in mind is that NATO is composed of 28 – soon to be 29 – sovereign, democratic, and independent nations, and these may have different approaches. But what we have to focus on is the decisions that NATO has made collectively, and NATO makes its decisions on the base of consensus. We have Wales summit decisions, we have Warsaw summit decisions and the approach of NATO towards Russia is very clear. The measures we have taken since the Wales summit are due to the aggressive actions of the Russian Federation in Ukraine. The illegal and illegitimate annexation of Crimea is something not accepted by any of the NATO allies. It is a given fact. It is very important that everybody says that this annexation will not be recognized. Secondly, all these measures, that NATO has taken since Wales, are defensive in nature. Russia has engaged in aggressive actions, which deviate from the rules that govern European security. There are clear violations, so it is our duty to the protect our citizens and our nations. For this reason, we are boosting our defense capacities, but while doing so, we are not provoking anybody. At the same time, we are still in dialogue with the Russian Federation. That’s why the NATO-Russia Council (NRC) was convened three times last year, so that we can continue the political dialogue. Since the annexation of Crimea, we have suspended NATO’s practical cooperation with Russia; it is important to keep in mind, however, that this occurred in response to Russia’s violation of the rules that govern European security. 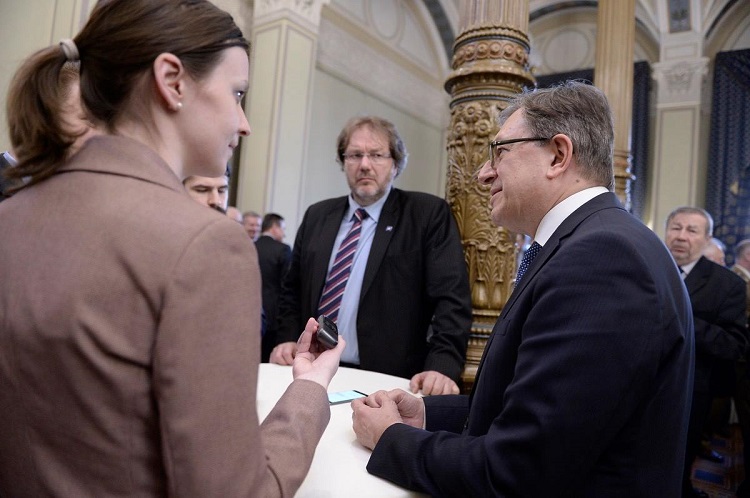 During his campaign, US President Donald Trump was highly critical of the alliance, complaining about what, in his view, were ‘inadequate’ contributions to defense on the part of NATO allies. To what extent do you feel that such rhetoric endangers NATO?

I don’t see anything for us to get concerned about, because President Trump in his public statements, as well as in telephone conversations with the Secretary General, has clearly emphasized America’s commitment to NATO. He also expressed his personal support for NATO. What he talks about – the fair burden sharing – has been on NATO’s agenda long before President Trump expressed his view on the matter. Secretary General Jens Stoltenberg has been advocating about the need for fair contribution and burden sharing for long time. That’s why in 2014, at the Wales summit meeting, the allied heads of states and governments agreed to increase defense spending to 2 percent of their GDP. For those who haven’t yet, this goal will be realized by 2024. So, the pledge is there. The good news is that immediately after that pledge was taken in 2014, defense cuts stopped the following year, and in 2016 we saw 3.8 % overall increase in defense spending on the part of European countries and Canada. We can say that we have now turned the corner; this is a good trend. Already this year, we’ve heard Romania declaring they will be meeting the 2 percent GDP goal this year, while Latvia and Lithuania are set to meet this goal next year. So the trend is good; there is still much left to accomplish, but these developments are something that even President Trump took very positively, and his recent public statement also expressed satisfaction about these positive signals coming from Europe.

What role, if any, has NATO played in helping to alleviate or handle the ongoing refugee and migrant crisis in Europe, as well as in the Middle East?

This is undoubtedly the biggest crisis since the Second World War. But NATO has shown its readiness to act promptly in the face of this refugee crisis through the contributions of two member countries, namely Turkey and Greece. In addition, NATO is also cooperating with the European Union; in the area of the Aegean Sea there is a maritime group of NATO naval vessels, cooperating with Turkish and Greek coast guard forces as well as with FRONTEX (European Border and Coast Guard Agency). Overall, we see a collective effort, there are number of allied countries contributing with different naval assets. The numbers are testifying to the fact that NATO’s activity has contributed enormously in reducing human trafficking. There has been a sharp drop in the number of people who are in this business. But, of course, we must specially applaud two countries, Turkey and Greece, because with their national assets and national efforts they have curbed this activity effectively.

As a former a Turkish ambassador, could you tell us more about the Turkish efforts in handling the ongoing refugee and migrant crisis?

I am in my international capacity now. But of course, putting aside my national affiliation – Turkey is an important allied country – I can say Turkey has been shouldering an enormous burden by hosting more than three million refugees and providing them shelter, accommodation and other necessary services. One has to understand that this is not an easy operation. You have to feed people, you have attend to their education requirements; there are people who are dying, there are babies being born. So, attending to their health issues requires a huge organization effort, and what Turkey has been doing with its national capabilities is something to be recognized and remembered. I think, there are a number of international organizations, first and foremost the UNCR (United Nations High Commission on Refugees), that recognize and appreciate Turkey’s efforts.

Hungary has been a member of the NATO Flying Training in Canada (NFTC) program since 2002. During this time, many members of the Hungarian Defense Forces have participated in the various levels of pilot training, Honvédelem.hu portal reports. NFTC is a military flight training program for NATO and allied air forces provided by the Canadian […]
Hungary Today 2023.01.12. 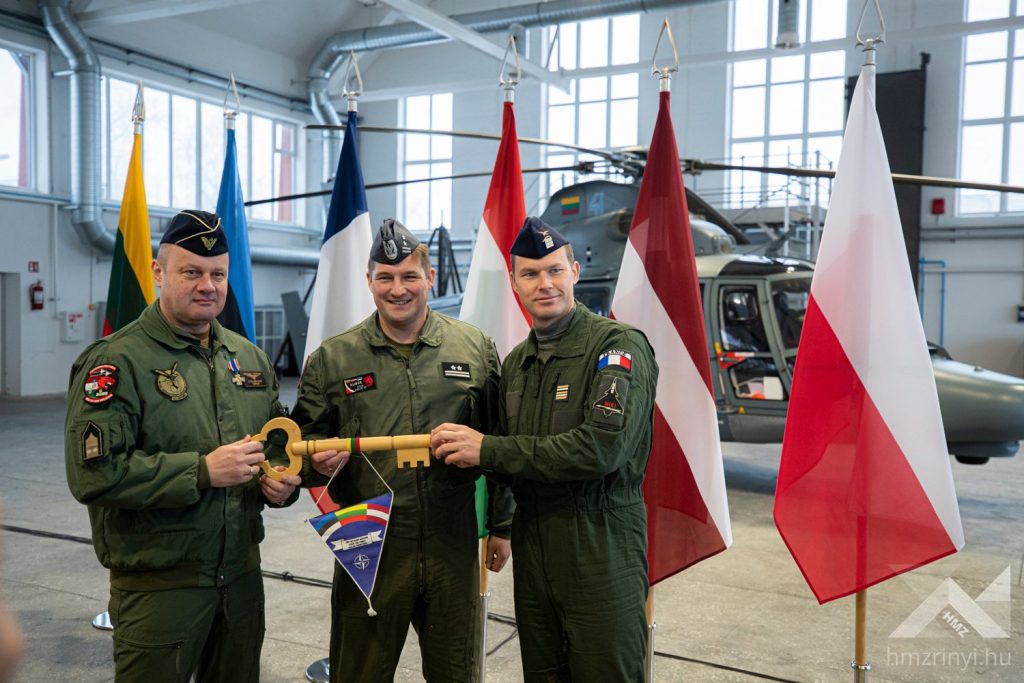 The Hungarian Air Force’s Baltic air policing mission, conducted by the Hungarian Gripen aircraft in the framework of NATO’s Baltic Air Policing (BAP) mission for the past four months, has ended. The Polish Air Force is replacing the Hungarian fighters as the lead nation in Siauliai, Lithuania, Hungarian news agency MTI reports. The contingent of […]
MTI-Hungary Today 2022.12.02.