Hungarian-Israeli relations have never been better, Szijjártó and Amrani agreed at the meeting. In recent years, Hungary has been consistent in its support for Israel in international forums, the statement said.

Hungary Has the Most Jewish Descendants After Israel

Szijjártó said Hungarian foreign policy would continue to promote a “fair” approach to Israel in international politics so that the country “does not become a target of unfair attacks”.

The government continues to stand by the need to develop ties between the European Union and Israel, the ministry said.

Amrani has worked as ambassador to Hungary since November 2016. 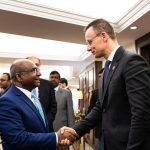