Govt to Send Aid to Children in Africa

The Hungarian government in cooperation with Africa’s Catholic Church will send textbooks to needy children in Africa, the state secretary in charge of aid to persecuted Christian communities, told an international conference in Budapest on Thursday.

Tristan Azbej said that the books would “guide thousands, then tens of thousands of children to a happy and balanced family life resting on Christian foundations”.

The Hungarian government has also agreed to contribute to the reconstruction of another 30 churches ruined in conflicts in the Middle East, as well as to the enlargement of the Terra Sancta Museum in the Holy Land, he said.

Azbej praised the conference in which “people with different backgrounds sat together to find out ways to help persecuted Christians”. International efforts in that area can “rely on Hungary, willing to be the driving engine, and if necessary, the pivot point for joint action”. “Hungary has agreed to carry on flying the flag, the Hungary Helps scheme serves this purpose,” he added.

Azbej called on “all players in and outside of government” to form an alliance aimed at “bettering the lives of over 200,000 Christians worldwide suffering from persecution”. 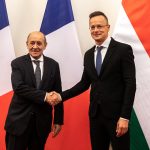