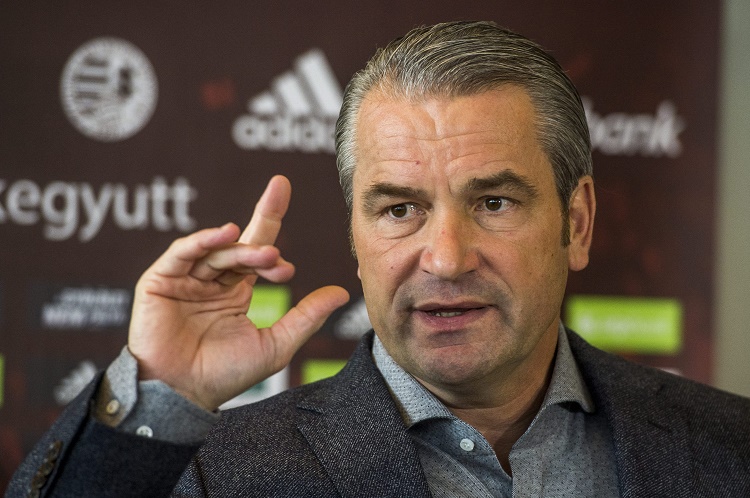 Bernd Storck, the German head coach of the Hungarian national football team, is among the nominees of this year’s German Football Ambassador’s Award. The prestigious recognition goes to individuals, players or coaches, who have made a positive contribution to German football and its reputation. Storck and the two other final nominees were selected from thirty initial candidates.

“Being nominated is a very great honour to me. Germany is a duty, everyone knows about the great traditions of German football. I’ve always worked hard to be worthy to represent my homeland abroad and to establish as good relations with my country of work as possible, today with Hungary”, said Bernd Storck just before he was handed out the document of his nomination as well as small bear sculpture, which is the symbol of Berlin. The German capital is the twin city of Budapest, where Storck’s nomination has been announced in a press conference.

Storck, a former VfL Bochum and Borussia Dortmund player, played in 170 Bundesliga matches and scored eight goals in his playing career. His biggest success was winning the German Cup in 1989. After ending his playing career, he was an assistant coach with several German clubs. In 2008, he was appointed manager of Kazakh side FC Almaty, and later he became the head coach of Kazakhstan. After managing the Hungarian youth team at the 2015 FIFA U-20 World Cup, he was appointed as the head coach of the Hungary national football team. Storck’ biggest success so far in his coaching career came with Hungary as he led them qualified for the UEFA Euro 2016 after 44 years.

The German Football Ambassador Award, recognized even by the German Foreign Ministry, was established five years ago by businessman Roland Bischof. On one hand it has been handed out to world star players and coaches such as Jürgen Klinsman or Mesut Özil, on the other hand it also recognized individuals who work for the reputation of German football in the background. The prize has three categories, the main award goes to a coach, the second one goes to a player, and there is an audience award as well. This year Bernd Storck is competing with Horst Kriete and Michael Krüger for the award. The accolade includes prize money that in the case of Bernd Stock would be used to support a charity project in Hungary.