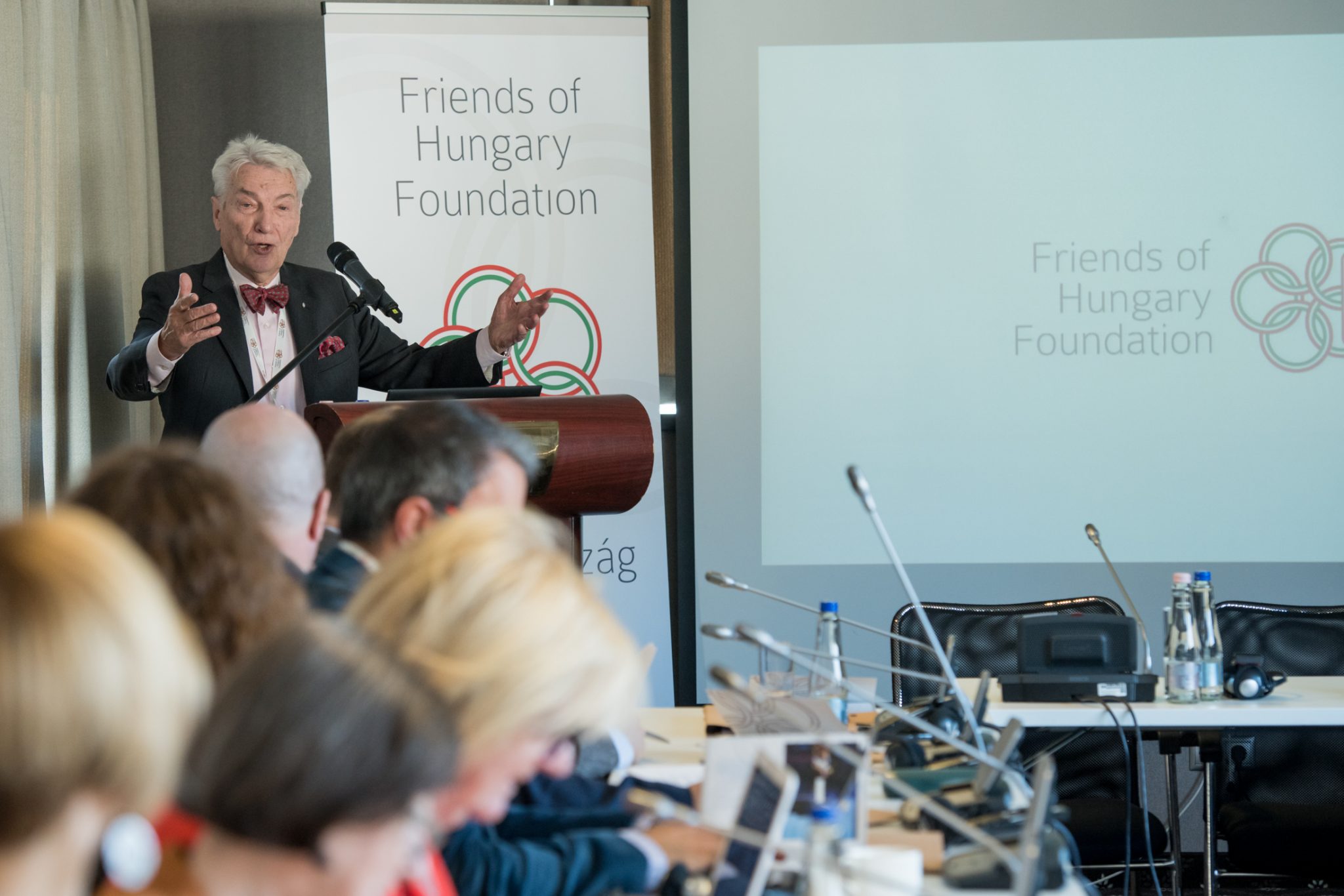 To show the true face of Hungarians, strengthen Hungary’s image, and provide journalists with genuine information on what is actually happening in Hungary, this our aims with the event –E. Sylvester Vizi, the Chair of the Board of Trustees of the Friends of Hungary Foundation, said at the opening of the international journalists’ conference.

Journalists from various renowned news sources arrived from ten different countries to Budapest for the Hungary at First ‘Site’ Conference. E. Sylvester Vizi, head of the Friends of Hungary Foundation and former president of the Hungarian Academy of Sciences, said: this event seeks to help foreigners gain a better understanding of Hungary and Hungarian politics. 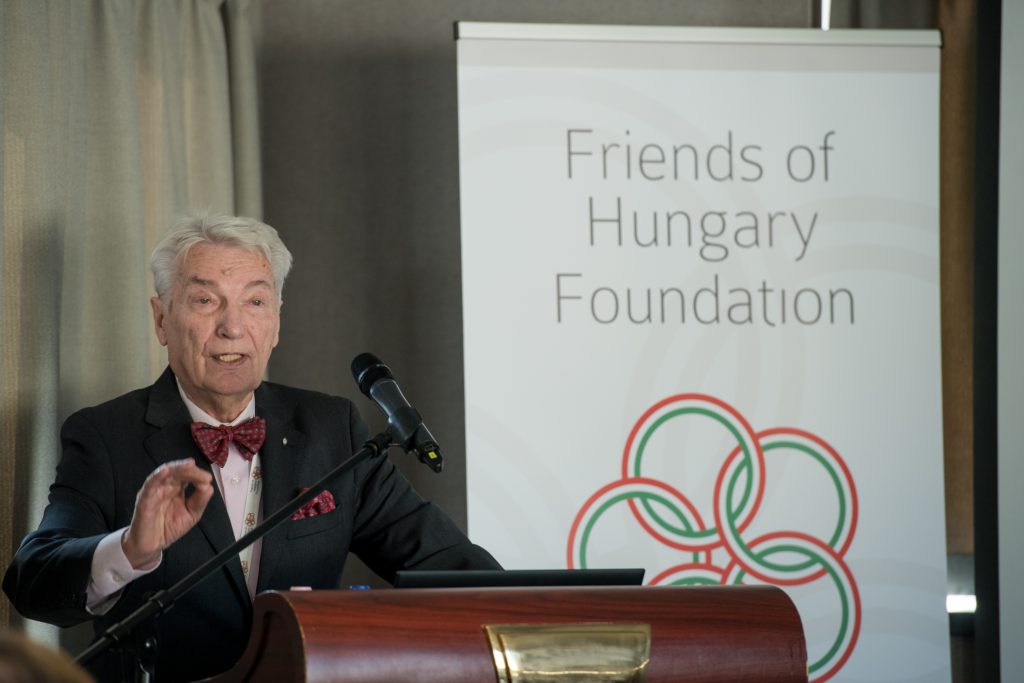 Vizi also spoke of the Foundation which was established 12 years ago in Los Angeles with founders including Nobel prize winner György Oláh, Sándor Lámfalussy (also known as the father of the euro), former governor of New York George Pataki, and Alfréd Paszternák, Holocaust survivor and professor of gynecology.

Our members are Hungarians, or individuals with Hungarian roots, but also those who have no connection, they simply love the country, our music, our culture.”

E. Sylvester Vizi added addressing the October 23rd national holiday and in remembrance that in 1956 our country was the first to be able to defeat Russian troops, even if later on they crushed the revolution. It was also Hungary where the deconstruction of the iron curtain began 30 years ago, which German Chancellor Angela Merkel recently acknowledged.

“Hungary has been receiving a lot of criticism since 2010. This is another reason why conferences such as these are important in providing opportunities to generate dialogue with foreigners”— Balázs Orbán, State Secretary for Parliamentary and Strategic Affairs at the Prime minister’s Office, said referring to the opportunity of foreign journalists to ask whatever they want from decision-makers who give speeches at the conference. 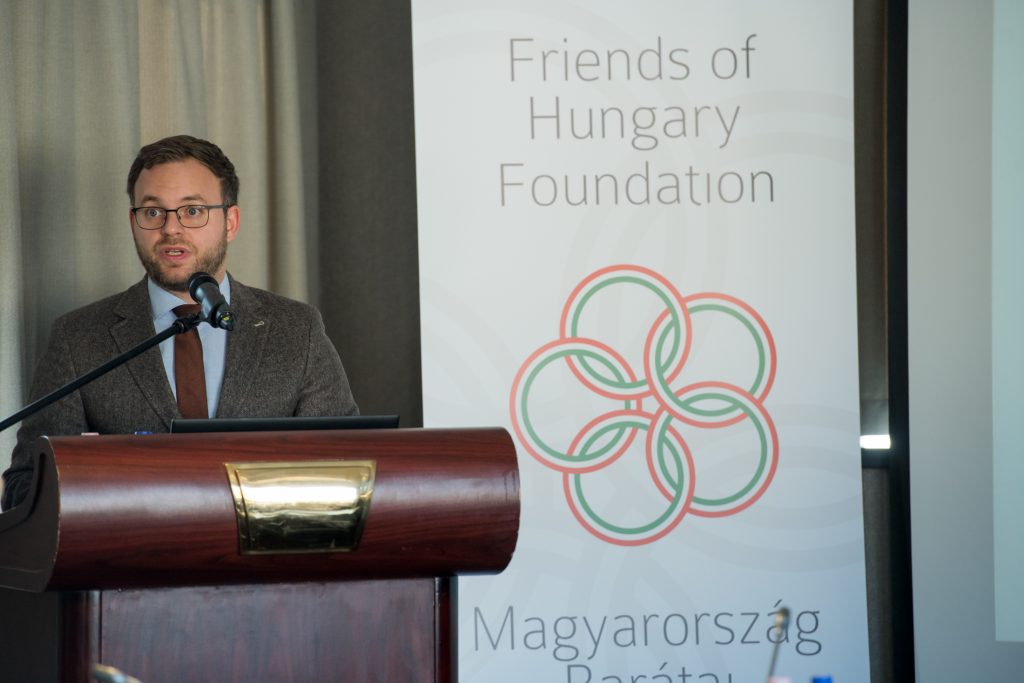 According to Orbán, Hungary’s politics today can only be understood if one is informed of the country’s history and geopolitical situation. Hungary’s location, on the borders of East and West, has posed challenges since the foundation of the state by St Stephen. Throughout this period, the Hungarian state was strong only when it maintained good relations with all major powers, while preserving its sovereignty and adhering to Christian traditions; since this has assured Hungary’s survival.

Regarding the recent past, the Minister of State emphasized: the 2010 change of government was an economic and social turning point. Financial indicators have improved while fertility rates increased as families were placed into the center of politics—although the birth rate is still not high enough, thus more family-friendly policies will be introduced. 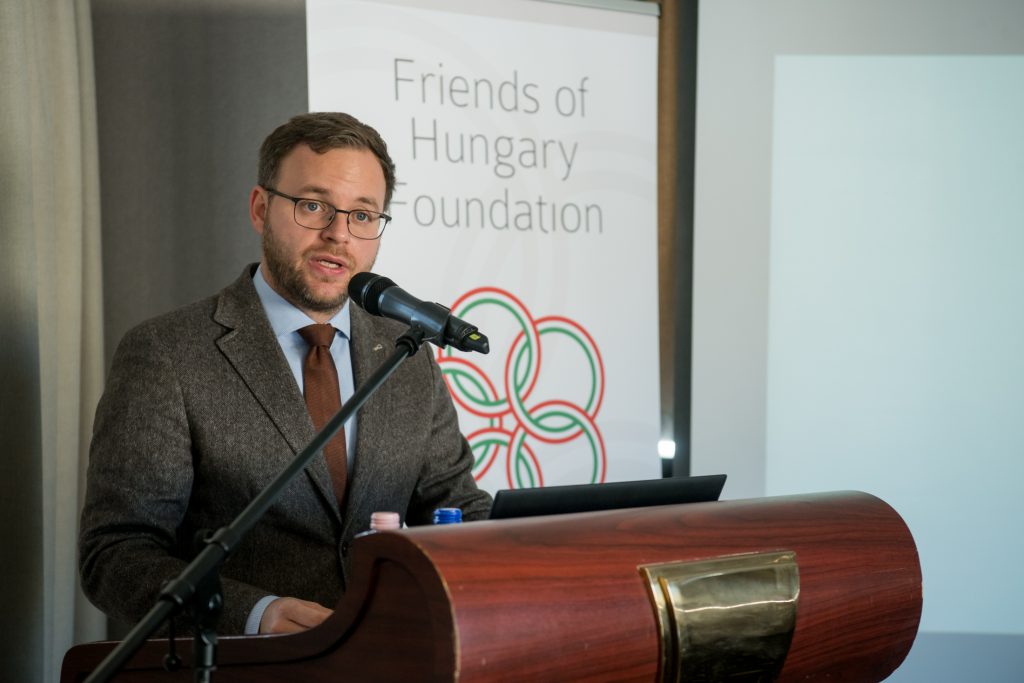 Balázs Orbán replied to a journalist’s question on joining the Eurozone telling it is still on the agenda, but more improvements are required in the economy and living standards to counter the negatives. Hungary will definitely not be joining until 2022.

Concerning Turkish-Hungarian relations, he explained: it is in the interest of Hungary, as well as Europe, for Turkey to not allow the many-millions of refugees there to continue onto Europe. Given that the 2015 migrant-crisis was resolved by a resolution with Turkey, the Minister of State considers it key to maintain this relationship.

On why the governing party lost the Budapest municipal elections, he stated: it’s a European tendency for capital cities to be led by leftist-liberals and not conservative, right-wing politicians. Considering this, he thinks it was actually surprising that a conservative politician (István Tarlós) was the mayor of Budapest for nine years.

Fidesz-KDNP won the municipal elections, though with painful losses too—Zoltán Kovács, the international spokesperson of the government, summarized the results of the local elections. He emphasized that with the 53 percent nationwide support, they would have won two-thirds again if these were parliamentary elections. He criticized the opposition which has formed an “unsavory alliance” encompassing everything from the post-communist left, through liberals to the “far-right, antisemitic Jobbik”; a coalition which he sees as united only by a hatred for Prime Minister Viktor Orbán. At the same time, Zoltán Kovács promised that the government would work together with the opposition-led municipalities– as long as they demonstrate the same attitude. 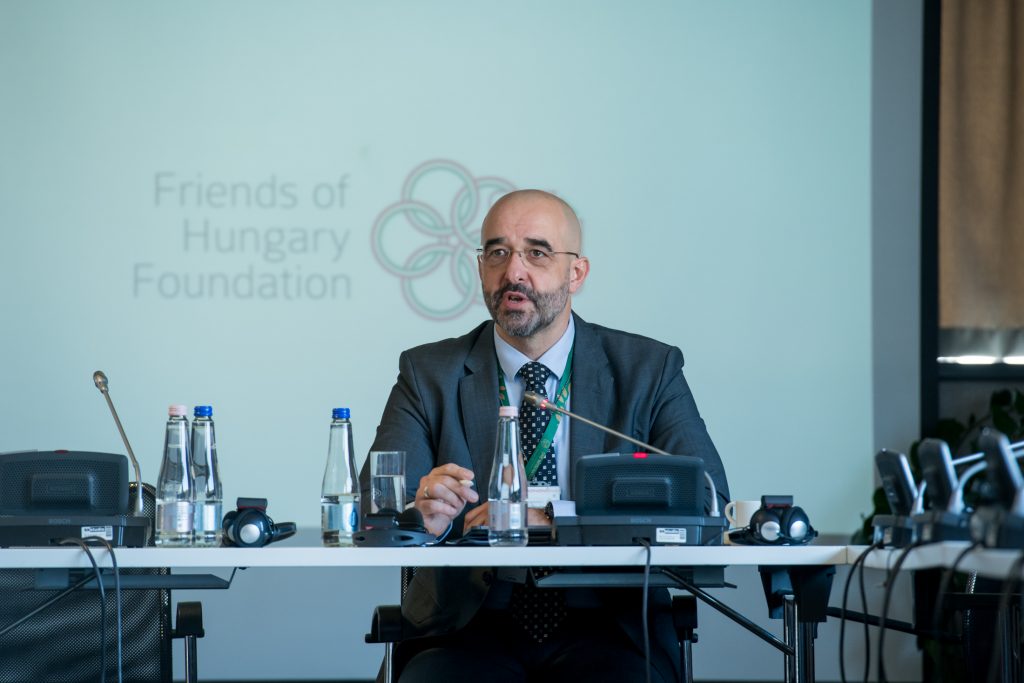 The government’s perspective is completely European, Kovács said addressing international topics. They entirely agree on many things and where are disputes –as in the case of migration—it is motivated by the fact that the Orbán government believes those decisions go against European interests. In regard to the rejection of the Hungarian EU commissioner nominee, László Trócsányi, the spokesperson complained that certain European institutes are playing political games. He stated that Hungary would not nominate another commissioner, Olivér Várhelyi is the only nominee. The Secretary called the new, Finnish EU budget recommendation unacceptable because it would divert a great amount of resources from Central Europe and redirect them to Southern Europe. The Hungarian government would only consider a 10 percent resource decrease as acceptable.

Answering a question on the European People’s Party and Fidesz’ relations, Zoltán Kovács replied that Fidesz had never gone against the basic values of the EPP, as opposed to others who went to the left. Fidesz and the government will not change their politics because this is what the people voted for. Instead, he believes, the EPP should end their political lecturing of Fidesz. 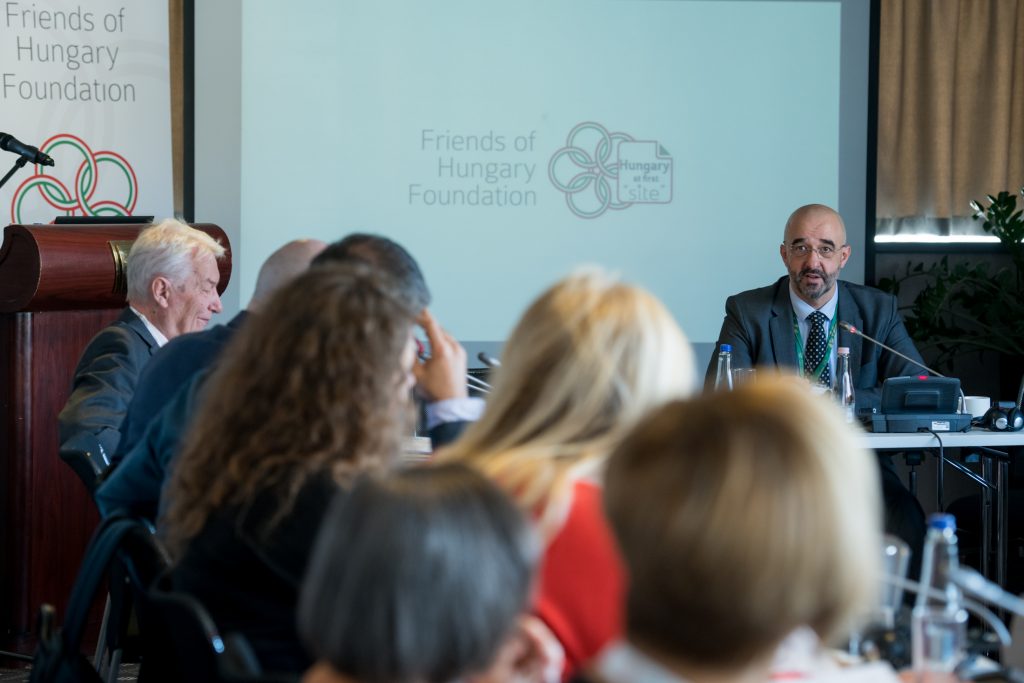 Replying to another question, he admitted that opinions on Russia vary between the V4. He emphasized that the EU had done nothing to decrease their dependence on Russian energy. Therefore, the Hungarian government’s stance is merely pragmatic in seeking normal relations with Moscow. He considers criticisms of this as extremist given that, for example, Germany and Italy both do business with Russia.

The journalists also asked about relations with the United States. Zoltán Kovács believes that things are finally the way they were meant to be because the ideological burden has disappeared. The Republicans, unlike the Democrats, do not want to determine what happens and how in Hungary and ever since Trump has stepped into office, relations have been characterized by mutual respect.

Translation by Katrina Hier
All photos by Tamás Lénárd/Hungary Today